Back in June, I wrote an article about Tyler Thornburg and Jeremy Jeffress. The point I made was that Thornburg’s ERA wasn’t misleading because it was in line with his DRA, while Jeffress wasn’t as good as his ERA would suggest, considering that his DRA wasn’t very good. Mainly, after digging a little deeper I found that DRA was hurting Jeffress because of his low strikeout rates.

This made sense because Jeffress was only striking out 6.8 batters per nine innings, at the time, which is an abysmal rate for closers. Actually, it’s an abysmal rate for any pitcher in this day and age. But, if we look closer, we can see that Jeffress, over the past three years has beaten his DRA marks.

The same can be said for his former teammate who remains in Milwaukee, Blaine Boyer. Boyer’s strikeout per nine can only be described as laughable: Boyer is striking out 3.6 hitters per nine innings, which is by far the worst mark for any qualified relief pitcher in 2016. Yet, Boyer has an RA9 of 3.90 in 2016, which is respectable.

So, the question is, why is this happening? Why are these two pitchers consistently beating their DRA numbers? Is this three-year trend a suggestion that Boyer and Jeffress are doing something that DRA isn’t fully capturing or accounting for? 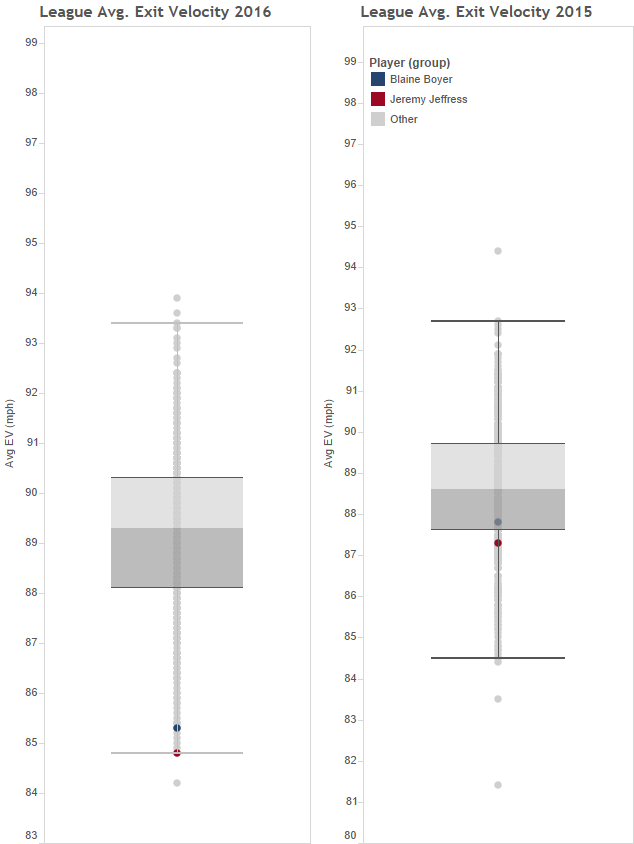 So, Jeffress and Boyer have done a good job at limiting hard contact by exit velocity measure. That said, not all exit velocity is created equally, as was displayed in this article written at Baseball Prospectus, “The Need for Adjusted Exit Velocity”. Basically, raw exit velocity numbers have some bias to them, because they do not account for the ballpark or the opposing batter. But, in an email, Jonathan Judge told me that, “I think even with adjusted exit velocity, Jeffress and Boyer both do very well,” which makes sense because both pitchers’ ballparks don’t have a huge park effect either way. Plus, in 2016, both pitchers have faced above average opponents. Jeffress has an oppTAv of .271 and Boyer has one of .269.

DRA does try to account for pitchers limiting contact, but it doesn’t use exit velocity in its model. Therefore, the next question I asked Jonathan was whether DRA was missing something. Here’s what he had to say:

“I would definitely be willing to concede that DRA could be missing something as to those two specific to exit velocity. For the most part, I think a pitcher’s results tend to speak for themselves, but in the case of pitchers with a very specific, quantifiable skill, sometimes our general filters for players don’t fully capture the effect.  In other words, they tend to be conservative in allocating credit. While that is generally what we want, I have no problem with the idea that minimizing exit velocity, in and of itself, is a skill that could allow pitchers like Jeffress and Boyer to be evaluated more fairly.”

But, what is certain is that both pitchers seem to have a strategy of throwing the ball down, in order to generate weak groundball contact. From MLB Advanced Media, here is Boyer’s zone and exit velocity, and then Jeffress’s: 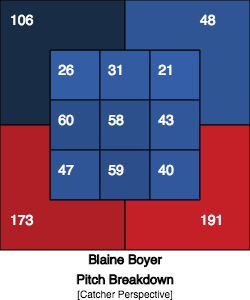 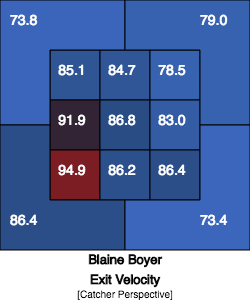 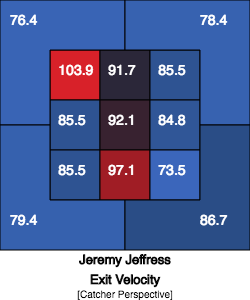 This makes these pitchers more valuable than they originally seem to be. In an era where strikeouts are all the rage, these two pitchers seem to be bucking the trend. Mainly, what they are trying to do is compensate for their low strikeout rates by limiting the contact made against them.

That said, only a few pitchers seem to have this sort of ability. This is not to denigrate DRA or any other metric. It’s just to show that baseball is still a very complicated game, and pitchers are complicated creatures that are difficult to understand.