This weekend, the 2016 season comes to a close. For the Brewers, it’s been a fairly successful one: They’ve already won three more games in 2016 (71) than they did in 2015 (68). And September’s gone better than all the months that preceded it, as Milwaukee has gone 14-12 and outscored its opponents 118-96. A couple of players — one a hitter, one a pitcher — have put together some interesting hot streaks to close out the season, so I thought I’d break those down to wrap things up for the year. Maybe they’ll sustain them into 2017, maybe not; whatever happens, we can continue to dream.

Most middle infielders won’t accomplish much with the bat. The Troy Tulowitzkis and Daniel Murphys of the world are the exception, not the rule. That’s why Villar’s 2016 breakout caught so many people by surprise — not many shortstops (or, in his case, shortstops-turned-third basemen) will club their way to a .285/.369/.458 triple-slash and .292 TAv. That level of play, perhaps unsustainable, combines with average defense to make Villar a marquee young player.

And in the last month of 2016, Villar has taken a step forward in another regard. From April to August, he hit 11 home runs and tallied a .144 ISO. In September, he’s swatted eight long balls already, upping his ISO for the month to an astounding .345. Over a 25-game span, he’s never before pulled that off: 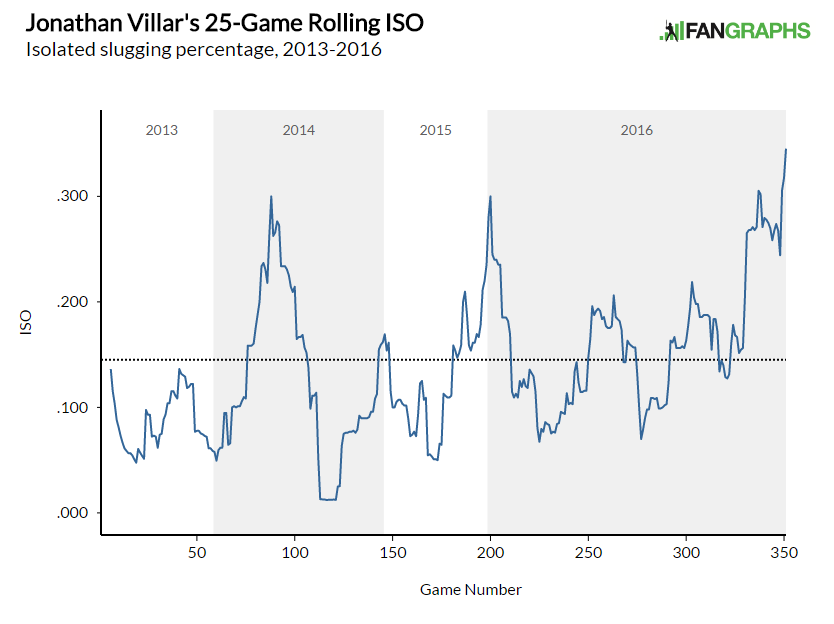 This graph doesn’t reflect just how much Villar’s current hot streak stands out. During the peak at the end of 2015 and the beginning of 2016, he accrued a mere 56 plate appearances; his 2014 hot streak occurred over 91 plate appearances. By contrast, he’s stepped to the dish 100 times this month, making this a duration of high power he hasn’t come close to equaling.

So what changed for Villar when August ended? He’s hit the ball pretty well in September, but not to an unprecedented extent. While his ground ball rate for the month is lower than normal, that hasn’t dropped to a new low either. The difference has come when he’s put the ball in the air. Villar has hit a lot fewer line drives this month, which means a lot more fly balls: 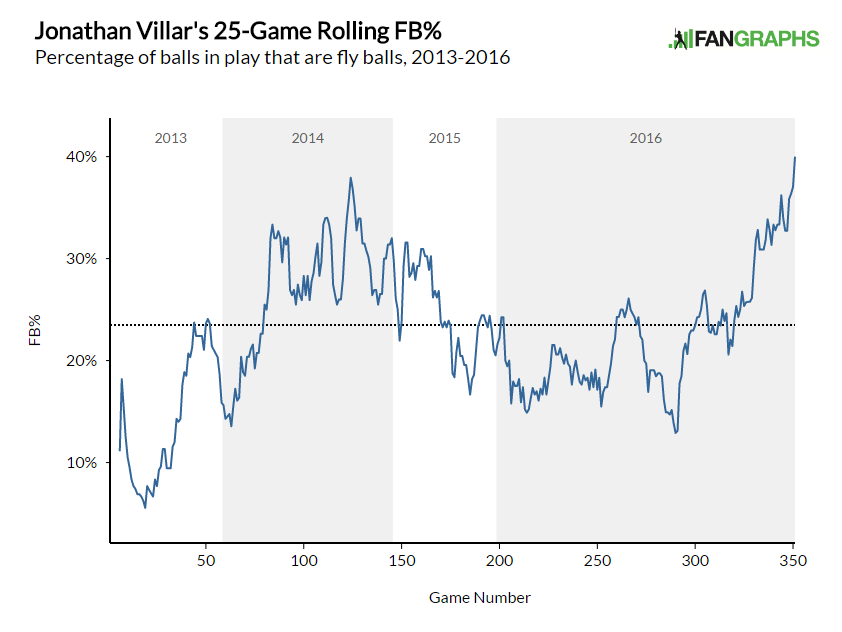 Over the first five months of 2016, Villar piled up 34 doubles and two triples. Those totals have come down to three and one, respectively, in month six, as more of Villar’s air balls have gone over the fence instead of to the gaps.

This leads to the principal problem with swapping out fly balls for line drives: Your batting average plummets, because those flies don’t go for hits when they stay in the yard. Indeed, Villar has a .192 BABIP this month — one of the lowest 25-game levels of his career — which has reduced his September OPS to .883. Selling out for power can sometimes pay off, but if Villar doesn’t pump up his average with some singles, he won’t take his production to the next level.

Still, a power-hitting middle infielder has some value, especially if he can take a free pass, as Villar can. And hey, Craig Counsell believes that Villar could hit 30 long balls in a single season — or so Villar says, at least. With an 25.7 percent strikeout rate and 11.6 percent walk rate, he already has two of the three true outcomes down. It would certainly be a sight to see if he could master the third one. Although a single 25-game hot streak does not a slugger make, it does put Villar in the right direction.

Peralta’s trend is distinct from Villar’s in two distinct ways. For one, the hurler kicked off his hot streak before September began. In his final start of August, Peralta mowed down the Cardinals, allowing a lone run and racking up 10 strikeouts in a 2-1 extra-inning loss. That set him on a five-game hot streak in which he’s posted a 3.03 ERA, with a 23.9 percent strikeout rate and 5.1 percent walk rate.

What’s given him that success? A boatload of swings-and-misses. He’s put up a 13.2 percent whiff rate over those five games, the highest level of his career: 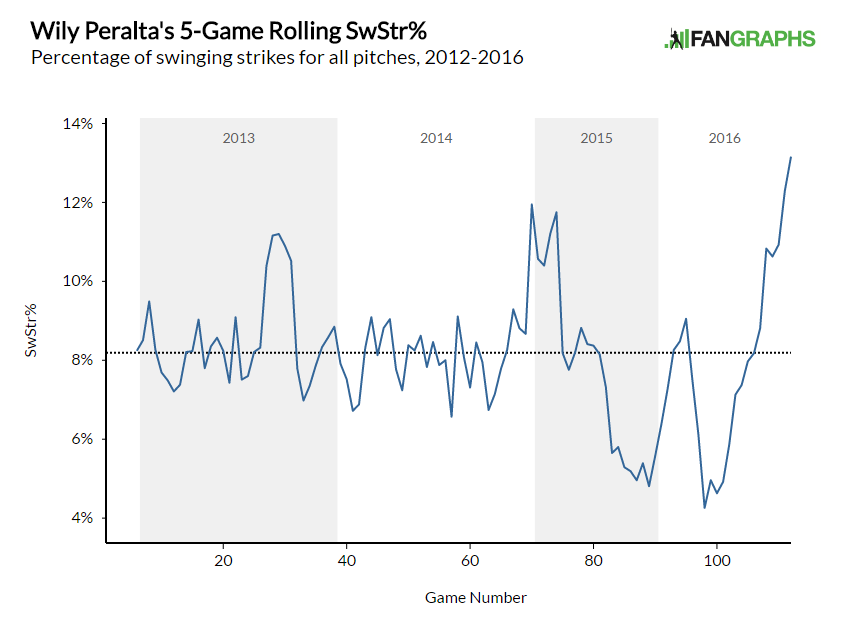 This leads to the second area where Peralta sets himself apart. A high ISO can have some drawbacks for a hitter, especially if it brings with it a dip in BABIP, but more whiffs for a pitcher are always welcome. And Peralta’s never fooled batters to this level before — his previous five-start high for swinging-strike rate was 11.9 percent toward the end of 2014. Something has made Peralta more deceptive. What could it be?

Well, his out pitch — the slider — has started working again. Over at Brew Crew Ball, my BP Milwaukee colleague Kyle Lesniewski observed that Peralta’s improved his slider since coming back up. Across this five-start span, the slider has induced a whiff 22.5 percent of the time, and perhaps recognizing that, Peralta’s relied on it much more often: 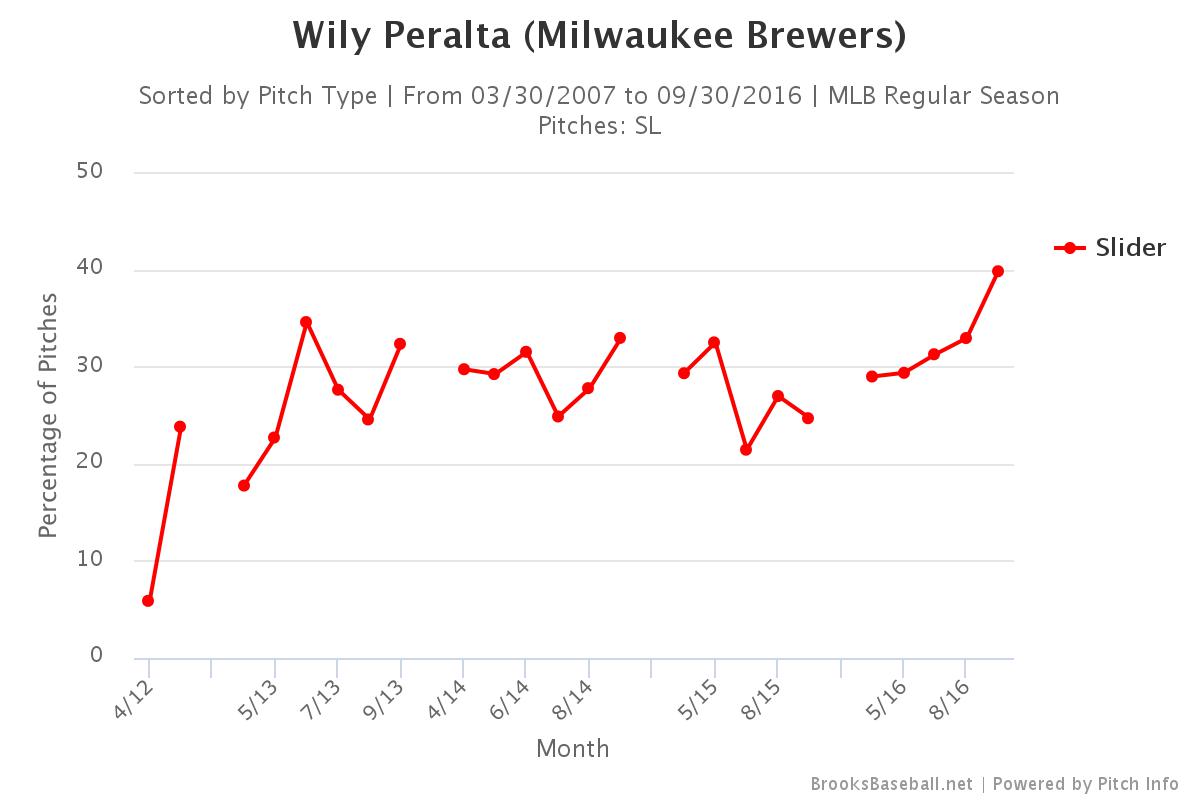 Like Villar, Peralta may not keep this up heading into 2017. The slider can, in theory, put a lot of stress on a hurler’s arm, so Peralta might not want to risk this heavy usage. These results are hard to turn away from, though. Peralta always had the potential for stardom as a prospect, and over these five contests, he’s lived up to that billing. If the slider can take his play to another echelon, who is he to turn it down?

Peralta takes the hill tonight for his final start of the year, facing a mediocre Rockies club that the Brewers haven’t lost to this year. Ending his 2016 campaign on a high note would raise his chances of sticking around for 2017. The Brewers will re-evaluate their rotation as we head into the winter, and the newly deceptive iteration of Peralta might stick in it for the long term.