As we head into the offseason, perhaps no Brewer has a less certain future than Ryan Braun. Milwaukee’s prodigal son prospered in 2016: The 3.9 WARP that he compiled this year was the highest total since 2012, when he finished second in the NL MVP voting. That exquisite production, together with his fairly team-friendly contract — he’ll earn $76 million over the next four years, considerably less than an free-agent outfielder of his caliber would demand — might make him a hot commodity on the trade market.

Regardless of where Braun heads for 2017, though, we can make some observations about his 2016 performance — and what it could foretell. The outfielder hit for a ton of power this season; his .233 ISO ranked 29th in the majors and was far above the .200 clip he’d played at in the prior three years. On the back of that clout, Braun put up a .305/.365/.538 triple-slash and .316 TAv, which played the largest role in the aforementioned WARP.

But did he deserve that kind of power production? Braun put the ball on the ground a lot more often in 2016 — his 55.7 percent ground ball rate, according to FanGraphs, was the highest of his career. Even with a respectable hard-hit rate of 34.4 percent, good enough for 71st in the majors, that many worm burners might have hurt his cause. The fact that they didn’t suggests Braun got lucky this season, which we shouldn’t expect him to maintain.

This might seem like a lengthy leap to make, so to bear it out, I ran a simple regression for expected ISO using these two metrics. That yielded this equation:

I applied this equation to the 146 hitters who qualified for the batting title in 2016. On the graph below, you’ll see their ISOs and xISOs, with our favorite Brewer circled in red: 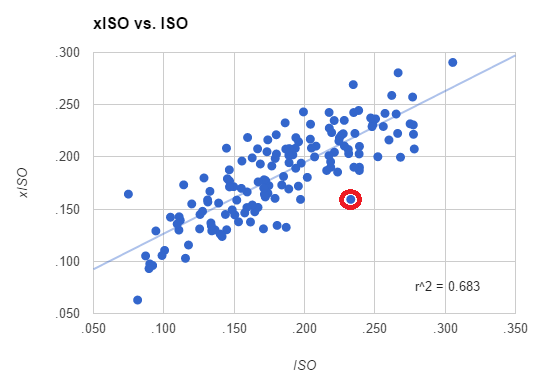 Not many qualifiers had this large a gap between their peripherals and their results. And by “not many,” I mean none:

In terms of residuals, Braun, Dozier, and Cruz established a class of their own. But what sets Braun apart is just how far he falls by xISO. Even Dozier and Cruz fared better than average by the expected metric; Braun, on the other hand, couldn’t even top the .162 baseline (which was the major-league average ISO for 2016). That’s what happens when you pound the ball into the ground so frequently — or, at least, that’s what should happen.

Just to drive home how fluky Braun’s 2016 was: FanGraphs has tracked ground ball data since 2002. In those 15 years, 2,258 player seasons have qualified for the batting title. The following list shows the qualifiers who had a ground ball rate above 55 percent and an ISO above .200:

Yeah, that’s it. Considering Jones would wash out of the majors after 2008, I wouldn’t call this the best company to keep.

So why did Braun have such a high ISO this year? Mainly because of his MLB-leading 28.8 percent home run/fly ball rate, which gave him 30 long balls in a mere 511 at-bats. Not only is that HR/FB rate a career high, by far, it also doesn’t have much evidence to suggest it’s legitimate. Of the 176 players with at least 150 air balls tracked by Statcast, Braun ranked 57th with an average distance of 292 feet. He didn’t club the ball like other power hitters, and I’d expect that to start costing him in the future.

This problem, on the surface, has an easy fix: Braun just needs to elevate! If he can start consistently putting the ball in the air again, he’ll cushion himself from regression in the power department. That’s obviously easier said than done, though. As Braun explained to FanGraphs’ Eno Sarris last year, the changing MLB environment has forced him to adjust and put the ball on the ground. With his 33rd birthday coming next month, Braun certainly doesn’t have youth on his side anymore, which means his days of fly balls galore might be gone for good. If he doesn’t find some way to trim his ground ball rate, expect the ISO to drop — fast.

Braun has kept a pretty open mind about the offseason, so he might not have a problem with a trade should it arise; of course, if David Stearns does make a deal, Braun can always shoot it down with his no-trade clause. But the Brewers — and their possible customers — should keep Braun’s ground ball rate in the back of their mind. When those fly balls stop leaving the yard and start falling into outfielders’ gloves, his output could take a nosedive, which wouldn’t please his future employer.