Velocity is the new thing! It’s always been a thing, sure — pitchers generally want to throw hard — but as of late, it’s become more integral than ever. While you’ve probably seen some version of this graph before, the trend really bears repeating: 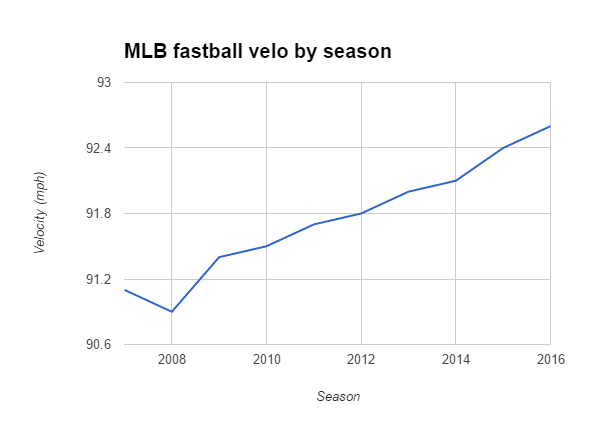 The MLB-average fastball this season, at 92.6 mph, clocked in 1.5 ticks ahead of the mean from nine years ago. For whatever reason, pitchers are throwing harder nowadays, which means big-league (no, not bigly) cheese isn’t what it used to be.

This brings us to Corey Knebel, who, as you may have heard, throws pretty hard. In his 2015 Brewers debut, Knebel prospered, twirling an 87 DRA- and 85 cFIP 50.3 innings. He established himself as the second-best Corey K. in the majors (because as much as I admire Knebel, he doesn’t yet have his own society). And his four-seam fastball enabled his success: He threw it 68.6 percent of the time, according to Brooks, and it was worth 1.9 runs in that sample, per FanGraphs.

But Knebel couldn’t keep up his dominance this year: His DRA- and cFIP inflated to 95 and 94 in just 32.2 frames. Across the board, his fastball either stagnated or got worse:

That regression cost the heater dearly, as its value fell to -0.4 runs in 2016. If Knebel wants to return to his 2015 level of play — and since he’ll turn 25 next month, he’s certainly young enough to accomplish that — he’ll need to start by working on his fastball.

Given all this and nothing else, we might assume the problem stems from velocity. Maybe, we’d guess, Knebel tired out last season, and his fastball didn’t travel as hard as it did the prior year. This wasn’t the case, though — in fact, Knebel actually gained fastball velocity in 2016: 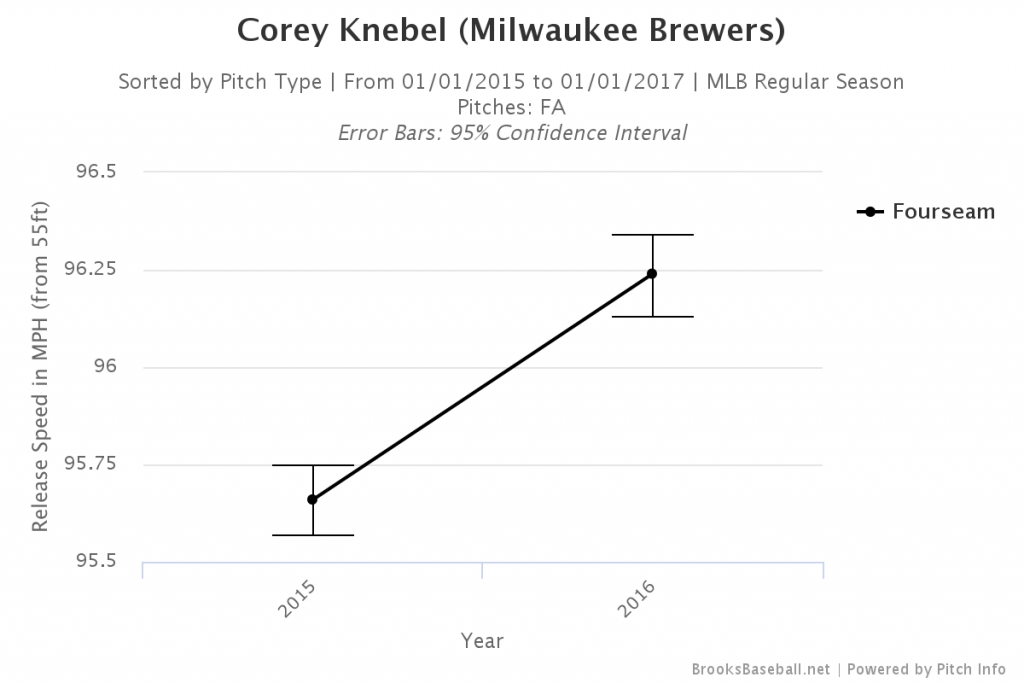 Knebel still throws hard. The issue is that he doesn’t throw hard enough. 187 relief pitchers used their four-seamer 200 or more times in 2016; of those, Knebel’s 96.2-mph velocity ranked 39th. He didn’t get much rise on the pitch (9.8 inches of horizontal movement, 68th in that sample), or much run (3.4 inches of horizontal movement, 137th in that sample). This sort of offering can stand apart down on the farm, the domain of junkballers and crafty veterans; up in The Show, however, it’s just not good enough anymore.

With that said, Knebel isn’t a one-pitch pitcher; he also owns a curveball. When Knebel made his major-league debut in 2014, Jordan Gorosh wrote that the pitch was “certainly in consideration for “plus plus” territory.” That offseason, following the Yovani Gallardo trade that brought Knebel to Milwaukee, Mark Anderson noted that the curve had “earned 70 grades from scouts since his amateur days.” While Knebel’s curveball hasn’t quite lived up to that billing — it was worth 0.7 runs this year, according to FanGraphs — it’s still performed better than his fastball. And since he deploys the latter about two-thirds of the time, it needs to be up to snuff.

Coming up through the minors, Knebel relied on his velocity to put hitters away. Questions surrounded his health — a slight ligament tear had ended his 2014 campaign early, although he’d later say he had made a full recovery — but if he could stay on the mound, his heat would develop him into a bullpen weapon, the thinking went. Now that he’s in the majors, the velo is still there, yet the results haven’t followed. Whether the solution is better command or a third offering remains to be seen; for now, though, we can say that Knebel can’t survive with a fastball alone.