The fact that the 2016 Milwaukee Brewers struck out more often than any other team in baseball history is surprising but not shocking. After all, a team with Chris Carter and Jonathan Villar taking a good percentage of the plate appearances was always going to be behind the eight-ball in terms of putting ball in play. But accumulating the most strikeouts ever is a truly impressive feat that requires a team effort, and the Brewers certainly had contributions from everywhere on the roster.

Strikeouts are up across baseball; at this point, that is not a surprise, and so it is no surprise that the team with the most strikeouts in history would be from this era of the game. In fact, one has to scroll all the way down to 83rd on the all-time list before finding a team from before the turn of the century—and that was the awful 1996 Detroit Tigers who went 53-109. But it is one thing to be a team in the midst of the highest strikeout era in baseball history, and it is quite another to be the team topping the leaderboard.

On the surface, this strikeout rate seems like a problem. After all, how can a team score runs if it can’t put the ball in play? This is a familiar refrain from broadcasters across the league, but it isn’t as true as people would have you believe. Dan Farnsworth of The Hardball Times posted a thorough analysis of the relationship between strikeouts and other types of offensive production, and the overall conclusion is that while strikeouts are obviously not a good outcome, they don’t appear to have particularly negative consequences on other aspects of a hitter’s performance. This is the logic that has permeated the league over the past couple decades, as teams have decided that if they have their players swing harder more often, the benefits (more hard contact) will outweigh the consequences (more strikeouts).

Surely there must be a tipping point, though, right? Maybe having the most strikeouts in history is taking this experiment a step too far? Interestingly, the answer to that depends on your choice of total offensive metric.

The Brewers finished 2016 twelfth in TAv, which is impressive given the lack of high-end talent in their everyday lineup. That makes them slightly better than league average, which indicates that the strikeouts were not all that much of a problem. However, the team also finished 25th in total runs scored, which is obviously much worse than twelfth and indicates that perhaps the strikeouts were more of a problem.

While there is an initial instinct to shrug off the low runs total as mere bad luck, it probably deserves a bit of thought. TAv is a more comprehensive metric, and it is a better indicator of true skill than runs scored as it adjusts for external factors such as ballparks. But the Brewers play in an offense-friendly park (which was about neutral for this season), so they shouldn’t have gotten that big a bump down just based on park factors. Thus, there is likely something else at play here.

Travis Sarandos explored the Brewers’ tendency to take pitches with men on base, and that seems like a contributing factor here. An easy way to have a big gap between team TAv and actual runs scored is sequencing issues, and Travis found that the Brewers were (at least as of late May) failing to swing in situations that required hits to drive in runs. And on a logical level, this is the type of issue that too many strikeouts would create: runners on base not being advanced because the team failed to put the ball in play.

Interestingly, a macro examination of offensive trends suggests this is not likely to be true over longer periods of time. BP has TAv values dating back to 1950, and an interesting trend arises when we compare the impact of strikeouts on TAv and runs. 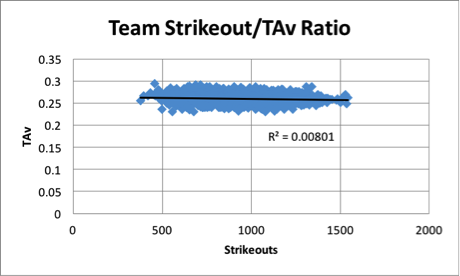 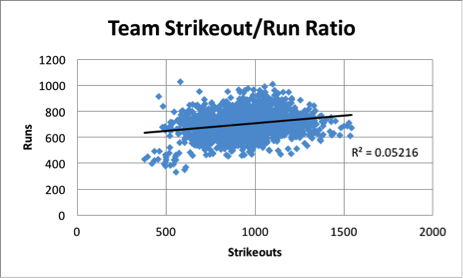 As the first graph above demonstrates, there is little relationship between strikeouts and team TAv. Overall, more strikeouts creates a slightly negative trendline, but it is not as striking as the clearer upward trend linking strikeouts and runs.

One does not need to be a mathematician to see that there is relatively little correlation between strikeouts and TAv or Runs Scored. The overall conclusion (at least, as it appears to my untrained eye) is relevant to the Brewers’ hopes for the future. High strikeout numbers are not negatively correlated with run-scoring, so the Brewers do not need to be distressed about setting their ignominious record.

Seth Victor
Follow @sh_vic
Seth is currently a student at UCLA School of Law. He is also a recent graduate of UC Berkeley, where he majored in Political Science and played club baseball.
read more from Seth Victor