For fans in other markets, the fact that the Milwaukee Brewers will enter the 2017 season with Major League Baseball’s lowest payroll won’t move the needle at all. Milwaukee is competing with Minnesota to the west and Chicago to the south, they haven’t ever won consistently, and are in the midst of a rebuild. And come on, nobody actually lives in Wisconsin, right?

But throughout most of the Mark Attanasio era, dating back to 2005, the Brewers payroll has at least been competitive with its National League Central division mates. Twice, in 2012 and 2014, the club has had an above-average salary for the division, and from 2007 through 2014, the club never had a payroll that was more than $20 million under the league’s average. Particularly when the team looks like it has a good chance to compete, owner Mark Attanasio has not been shy about sinking money into the team, a quality that stands in stark contrast to the club under Bud Selig. Baseball Prospectus’s contract page shows this trend quite well: 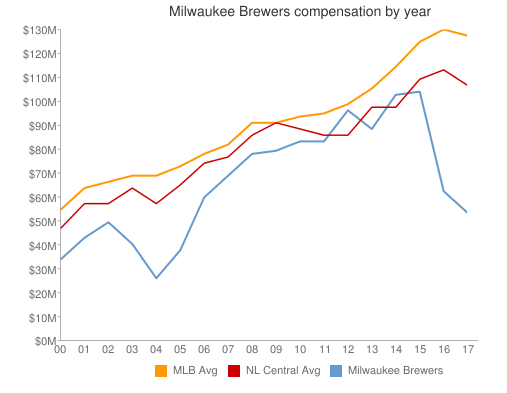 I discussed this a bit on the Effectively Wild podcast with Ben Lindbergh and Jeff Sullivan.  I don’t have a problem with Milwaukee’s decisions to hold off on spending given the free agent market that was presented to them this offseason. Taking chances on players like Neftali Feliz and Eric Thames rather than spending on hotly sought after stars, most past the age of 30, makes a lot of sense. As a result, should a few things break right this year, the Brewers will be in a spot where they can splurge to put the pieces in place to become competitive by the end of the decade.

But if the Brewers don’t spend, and soon, fans will be well within their rights to be mad, or worse: apathetic. No club consistently outdraws for its market size than the Brewers, who can boast over two million fans in the stands every season since 2004. The city itself has put in over a billion dollars building and renovating Miller Park, the primary source of the franchise’s value. These fans deserve something worthwhile for the price of admission.

Money is a resource rebuilding teams can use, too. Even if free agent signings aren’t part of the plan for the future, they contain value as trade chips and to eat up innings or plate appearances when the youngsters aren’t quite ready yet. And it sends a message to veterans around the league that the organization cares and will try to put a consistent winner on the field.

After years of dealing with Selig’s thrifty ways, I was one of many Brewers fans who felt grateful for Attanasio’s willingness to extend the club’s payroll at the club’s height around the turn of the last decade. Much was made about how the Brewers were budgeting on a break-even basis or even for a loss. “It raised questions among our ownership group because, fundamentally, when you think of a business, you think you budget to a profit, right? Now we budget to a loss,” Attanasio told the Milwaukee Journal Sentinel in 2010.

I can appreciate sports owners who treat their teams like luxury investments instead of businesses. Those are the kind of people who will pour enough money into the game to keep it interesting, who will actually use their money to create value, both by fielding a competitive team and by fostering the community around it. Considering the amount of public money that powers the sports industry, in Milwaukee and everywhere else in America, I think that bargain is only fair.

For the past couple of years, it has looked like that philosophy has gone out the window for the Brewers. This team is instead being run like it’s part of an investment portfolio, not a competitive sports team. It can be justified for the first couple years of the the rebuild, as the team gets prepared for what should be its first run at contention soon. But if Attanasio’s Brewers don’t start spending soon, he shouldn’t be surprised if that reliable fan support starts to dissipate.

Tags: 2017 Brewers, Brewers payroll |
Jack Moore
Follow @jh_moore
Jack Moore is a freelance sportswriter based in Minneapolis. His work can be seen regularly at VICE Sports, The Guardian, and The Hardball Times.
read more from Jack Moore

2 comments on “When Will the Brewers Spend Again?”

There really was no way for the Brewers to compete to keep Prince Fielder or C.C. Sabathia. It appeared that, for the most part, owners weren’t going crazy with contracts (top ‘closers’ aside) last off season. Will the Brewers even have a chance to compete for a top starter, and would that be a wise investment?

That’s a good question. I think it has to be a contract by contract basis — the Brewers absolutely should evaluate each free agent and be able to differentiate someone like Sabathia or Greinke as a big ticket free agent. Not every big contract will be worthwhile, but that’s why the Brewers need to do their homework and find the best possible scenarios. If they’re missing out on a free agent like Greinke, that’s just as bad as missing on a draft pick.