Spring training is officially underway, and this year’s battle for roster spots should be one for the ages. On a rebuilding club like the Brewers, the first few weeks of March function as an extended open audition. You can see it all over the diamond. Keon Broxton digs in his cleats as Lewis Brinson nips at his heels. Scooter Gennett moves off of the keystone so he can better compare with Hernan Perez. Eric Thames does baseball stuff on U.S. soil and it is inherently fascinating. But nowhere is there more intrigue than on the pitcher’s mound. The Brewers have 33 pitchers in camp, all vying for the same twelve or thirteen spots. Fittingly, one of the most interesting candidates fired the Brewers’ first official spring training pitch on Saturday. The result was pedestrian: a ball to Andrelton Simmons en route to a scoreless inning. The pitcher, Brent Suter, is anything but pedestrian.

It goes without saying that few 31st round draft picks ever reach the major leagues. Suter did so on August 19th, taking the loss in a game that Keon Broxton really, really wanted to win. According to MLB Statcast, Suter’s four-seam fastball was the fifth-slowest in the major leagues last year, with an average velocity of 85.00 mph. The Statcast leaderboard shows two knuckleballers, Jered Weaver, and utility infielder Darwin Barney (who threw three four-seamers in the nineteenth inning of a six-hour game), and then Brent Suter. Brent Suter’s average exit velocity against was 84.7 mph. That mark was the lowest in the majors for any pitcher with at least 50 batted ball events.

Nobody can agree on how to value Suter. Here’s what we know: Suter posted a 3.32 ERA in 21.7 innings last year. What was he worth to the team? Baseball Prospectus credits him with an unsightly -0.6 WARP, on the basis of a 7.42 DRA. Meanwhile, the folks at Fangraphs value his contributions at 0.2 WAR, citing his decent 4.39 FIP and 4.51 xFIP. Finally, Baseball Reference pegs him at 0.5 WAR, in spite of a below-average game-entering Leverage Index. For a player with just over 20 innings to his credit, a 1.1 WAR / WARP spread is faintly incredible.

All of which is to say that, even if Suter never throws another major league pitch, he’ll still have had a pretty fascinating career. This is the worst-case scenario, of course; for Suter; for the Brewers; and for baseball writers laboring through the last weeks of the offseason.

Happily, there’s good reason to believe that we haven’t seen the last of Suter. When it came to weak contact, Brent Suter, the soft-tossing 27-year-old non-prospect, was unexpectedly, unobtrusively elite.

At this point, I’m obliged to sound the small sample size alarm. Again, Suter pitched only 21.7 innings last year. Posting elite exit velocity numbers over the course of an entire major league season is quite different from posting them over 14 cumulative appearances. On the other hand, Suter has a track record of getting outs, and you can bet that his 2016 numbers piqued the curiosity of the Brewers’ analytics team. Conventional wisdom dictates that Milwaukee will break camp with at least one lefty in their bullpen. Suter’s stiffest competition comes from swingman Tommy Milone and non-roster invitee Andrew Barbosa, so his odds of making the club look pretty good barring injury or meltdown.

How, then, can he maximize his talents? Perhaps the answer lies in throwing even slower.

Per Brooks Baseball, Suter relied heavily on his four-seam fastball last year, throwing it for almost 63 percent of all pitches. Despite the low velocity, he coaxed pretty good results from the pitch. Though it doesn’t miss many bats, it generates groundballs at a near-50 percent clip. Opposing hitters batted .288 and slugged .371 against the four-seamer. This is hardly elite, but not too worrisome.

Suter mixed in an 85-mph sinker for another 5 percent of his repertoire. The sinker produces similar results: great for groundballs, not so great for whiffs. Brooks Baseball counts just 16 for Suter all year, only one of which went for a swinging strike. Still, the rookie held the opposition hitless over those sixteen pitches. 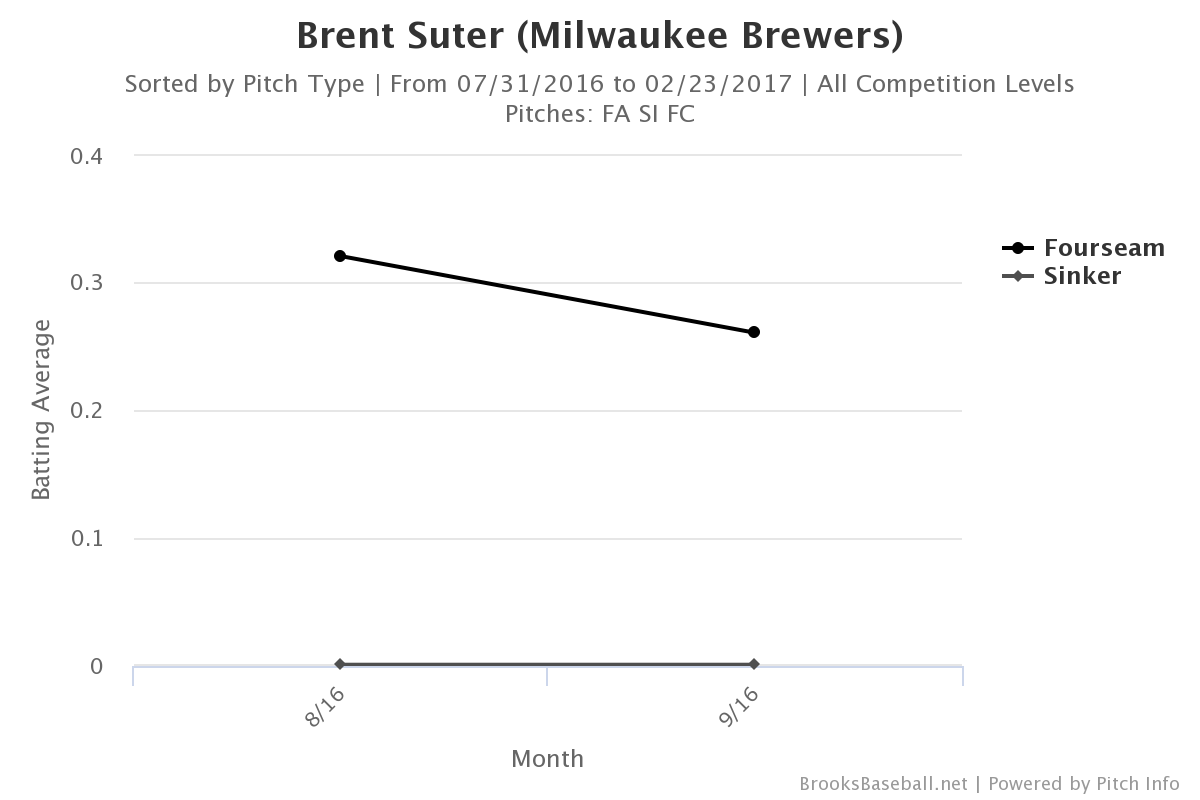 The lefty’s offspeed and breaking pitches are considerably more interesting. Suter threw 51 curveballs last year, averaging 72.51 mph and comprising another 15 percent of his arsenal. The curve was murdered to the tune of a .667 average and a 1.333 slugging percentage. But Suter’s slider and changeup were very effective. 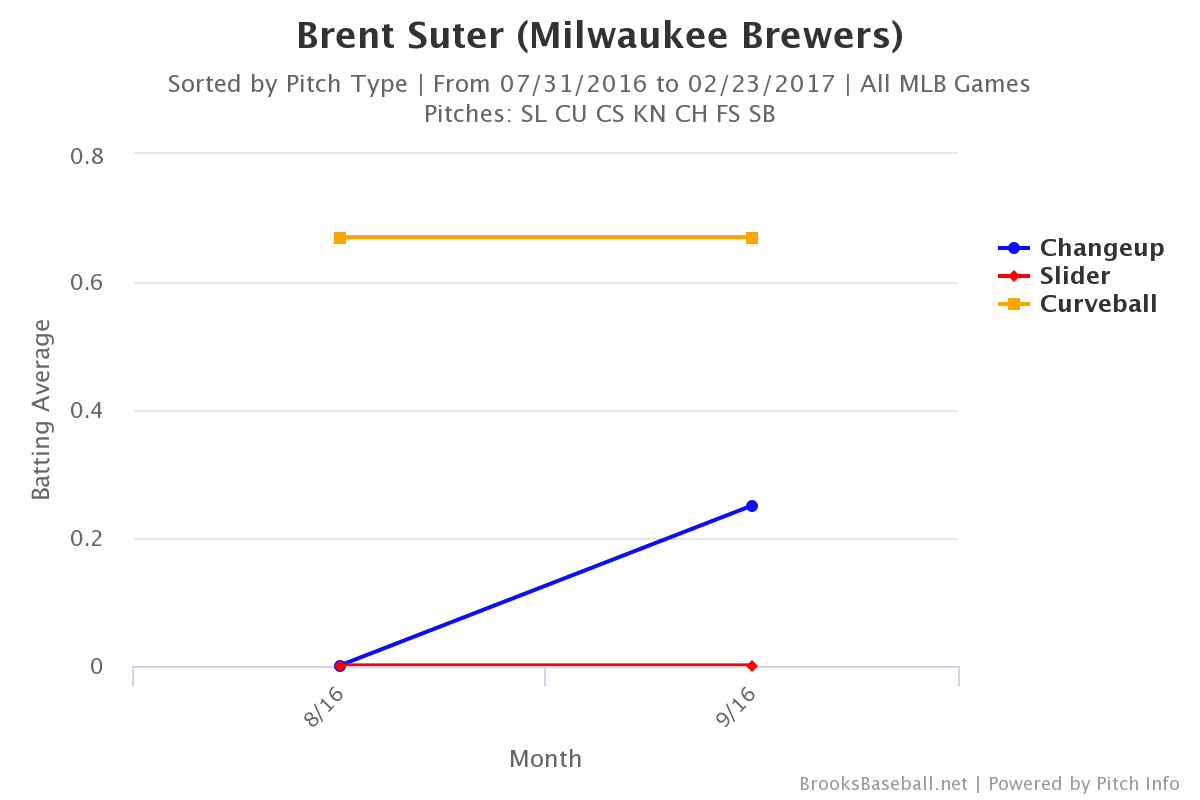 Suter threw 35 changeups and 27 sliders, with the former clocking in at 78.5 mph and the latter at about 75. Cumulatively, batters hit .097 against these two pitches, while whiffing on a staggering 22.86 percent of his changeups.

Encouragingly, the whiff rates on all of Suter’s pitches trended up as the season wore on. 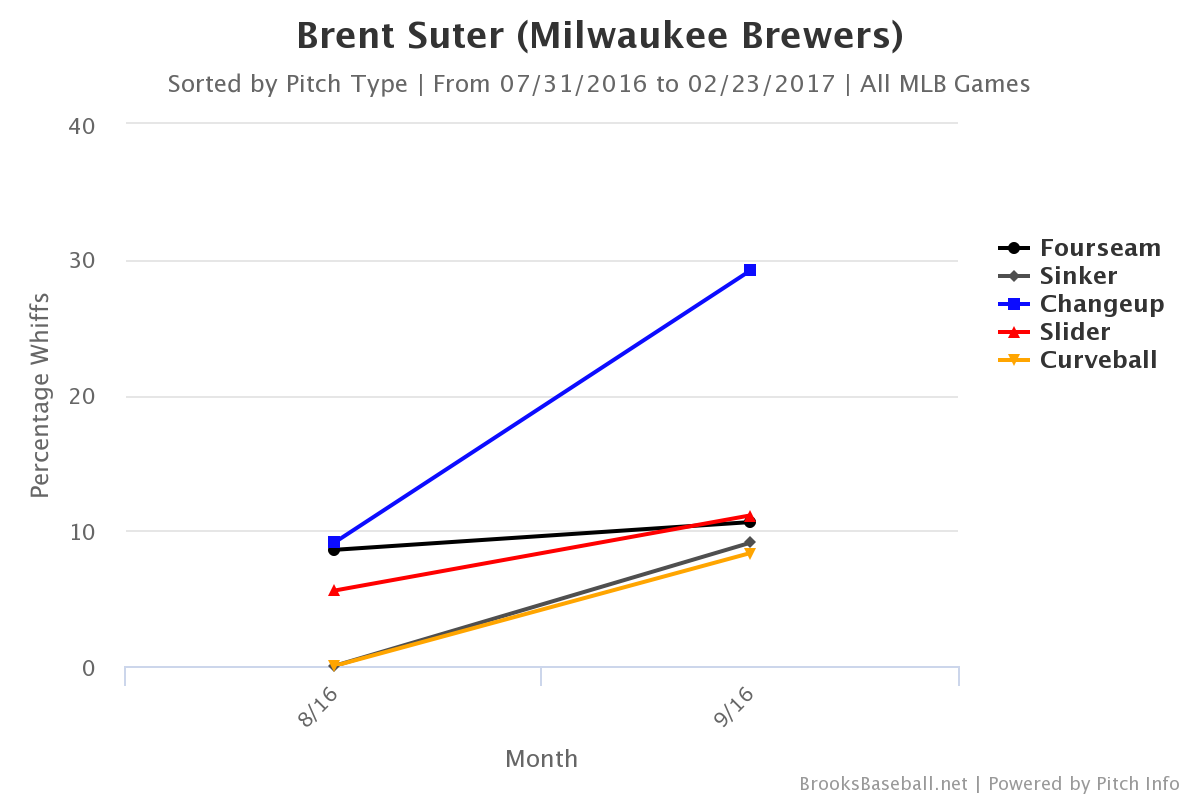 Realistically, look for Suter to post a serviceable ERA with modest strikeout totals and an excellent walk ratio in a smattering of low-leverage innings in 2017. Squint a bit, and you can see a pretty good year in that arm. If Suter can hone his sinker and cut back on the curve, he could develop into an intriguing weapon, disrupting opposing batters’ eyes and timing. Facing Suter after six innings of Junior Guerra or Jimmy Nelson would be no small adjustment. Optimistically, look for Suter to continue generating tons of weak contact as he carves out a niche for himself in the big league pen.

Idealistically (and perhaps somewhat ridiculously), look for Suter and Jett Bandy to become the only all-31st-round-draft-pick battery to ever combine for 3+ WARP. But whatever your view, just make sure you look out for Brent Suter.

3 comments on “The Intriguing Brent Suter”

And most importantly, despite the lack of velocity, he really speeds up the game with his rapid fire delivery. He has to be Manfred’s favorite player.

If he threw 100 mph the game would be over in an hour!

Thanks for reading! Your point renders all of the above analysis moot. Suter for Opening Day starter – that should trim off two minutes at least.