On Sunday, Kirk Nieuwenhuis was outrighted to Class-AAA by the Brewers to clear a roster spot for Brent Suter. This was hardly a stunning development. The pitching staff was stretched thin after a series of short starts, and Nieuwenhuis had struggled to carve out a role in Milwaukee’s crowded outfield.

And even when he did see the field, Nieuwenhuis was cataclysmically bad. He struck out in fully half of his plate appearances, and by FRAA he was already over half a run worse than average. Furthermore, Nieuwenhuis’s slash line of .080/.233/.240 suggests that Brent Suter might even be an improvement in Nieuwenhuis’s pinch-hitting role.

If Nieuwenhuis gets another shot at big-league action with Milwaukee, it will likely be due to injuries. If not, his 2017 will go down as a very humdrum year, statistically. His outcome stats tell the story of a player who didn’t get much of a chance, but did absolutely nothing to warrant further opportunities.

But thanks to Statcast data, we can dig deeper. In reality, Nieuwenhuis’s year wasn’t humdrum at all. Had the Baseball Gods perhaps smiled upon him, even a little bit, Nieuwenhuis might have been a legendary tale, rather than a cautionary one.

Ever since his 2010 breakout in AA as a Mets farmhand, Kirk Nieuwenhuis’s calling card has been his ability to hit for power. Since 2015, we’ve come to understand the concept of power hitting on a much deeper level, thanks to all of the new data that has come with Statcast.

Isolated power is useful, but it’s still an outcome-based stat, and thus subject to the variable luck that comes with batted balls in the field of play. Exit velocity, hard-hit rate, average batted-ball distance all identify the elite power hitters without punishing those whose flyballs fate has deigned to keep in the park at a frustrating rate.

Since MLB started tracking batted ball speed in 2015, Nieuwenhuis has consistently hit above average (87.60 being the MLB average for the 2017 season) in that department: 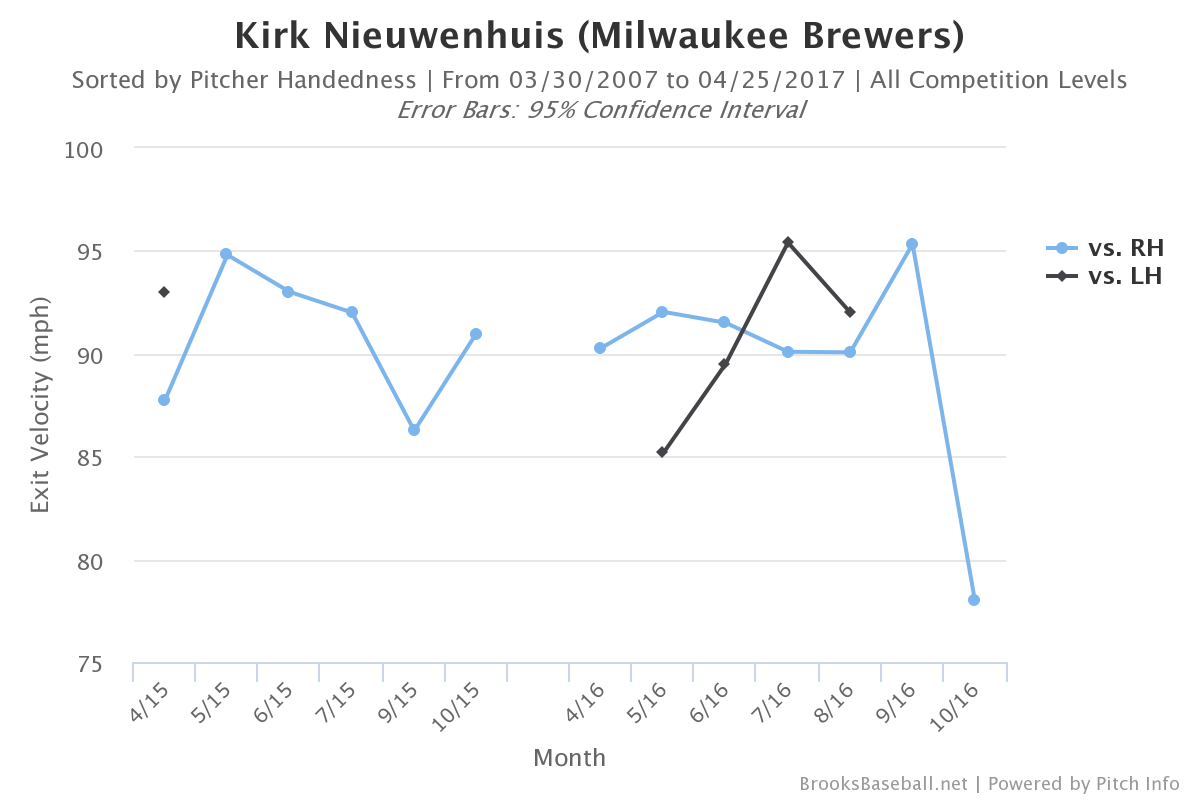 Before you inquire about that crater in October of 2016, the sample size for that month was one. And September of 2015 had just four points to work with. Other than those small-sample anomalies, Nieuwenhuis has consistently been a better-than-average power hitter for several years now, albeit, one with a highly problematic K-rate that has just as consistently flirted with the 35 percent mark.

In 2017, Nieuwenhuis took his whiff-heavy, hard-hitting profile to the absolute extreme. If he’d accumulated enough batted-ball events to qualify for the leaderboard, his 95.89mph average exit velocity this season would be fourth in all of baseball, trailing only Miguel Sano, Joey Gallo, and Khris Davis. His average batted ball distance of 260.95 feet would pace all of Major League Baseball. Looking at the Statcast data, Nieuwenhuis looks like a superior version of Ryan Braun at the plate:

It is still April, and Nieuwenhuis has hit in Milwaukee, Toronto, Cincinatti, and Chicago. That’s a lot of cold, damp air, and cold, damp air keeps long fly balls in the park. Had Nieuwenhuis gone on the same tear on a June or July road trip through southern stadiums, it’s not far-fetched to imagine the outcome looking far different. Those balls would be leaving the yard, and Nieuwenhuis would be the biggest story in baseball.

But that’s not what happened. Instead, Nieuwenhuis is ticketed for Colorado Springs. While there, if he wants to earn another crack at the big leagues, he’s got some work to do.

The 2015 BP Annual summed up Nieuwenhuis’ approach as “attack any fastball in the zone, take all breaking pitches, and occasionally look stupid on changeups he thought were fastballs.” This year, Nieuwenhuis made one big tweak: he changed “any fastball in the zone” to “any fastball over the plate, regardless of height. In fact, the most common way for pitchers to attack Nieuwenhuis is to put the ball on the outside corner, just below his knees. That’s among the least-hittable pitches for a hitter to see, but, inexplicably, Nieuwenhuis chases it nearly half the time. The letter-high fastball over the plate is another unhealthy offering that he just can’t seem to help but gorge himself on, too: 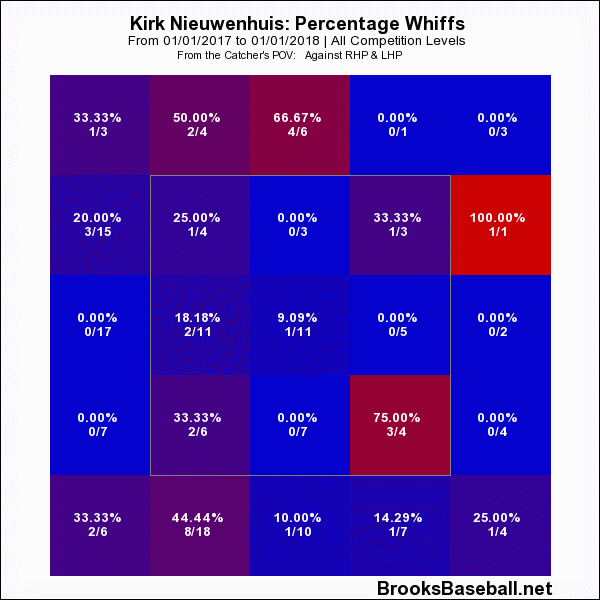 The result has been a jaw-dropping, eye-popping strikeout rate of 50 percent. That’s not a “check engine” light; that’s smoke billowing into the cockpit. The number of pitches Nieuwenhuis is seeing in his danger zone indicates that the rest of the league is well aware of his engine failure. But he’s shown the skill to be a better-than-replacement-level contributor before. Perhaps some time in the minors will be the best thing for him in the long run.

At any rate, playing at Colorado Springs should be a great thing for Nieuwenhuis in the short run. His rocket-launching, all-or-nothing bat is going to be a natural fit in the rarefied air of the Rockies. If he just keeps pounding the baseball with as much authority as we’ve seen so far, he’ll be turning heads with his numbers soon enough, even if he doesn’t make any adjustments.

But if Kirk Nieuwenhuis has grander plans for his life than being a really really good AAA outfielder, this assignment is not a chance to showboat. It is an opportunity to fix a critical flaw in his game, to prove that he’s capable of making the adjustments that fringe major leaguers must regularly make to keep themselves employable.

But whichever path he ends up taking from here on out, it’s still fun to fantasize about the Kirk Nieuwenhuis: Breakout Home Run Monster story that we just missed out on this April. And it’s even more fun to fantasize about him fixing his zone-recognition ability and turning into the bona fide major leaguer he’s capable of becoming.

Tags: 2017 Brewers, 2017 Brewers analysis, Kirk Nieuwenhuis |
Colin Anderle
Follow @nderleColin
I called them "Manny and the Jett" before it was cool.
read more from Colin Anderle