Welcome to Week Six of the Weekend Recap. The Brewers had themselves a great weekend against the Mets, sweeping the series and capping it by scoring ten runs after the 5th inning to come back from a 7-1 deficit. Milwaukee won, 11-9.

The Brewers’ consecutive games with 11 runs scored is only the 15th time in franchise history that feat has occurred. The last time it happened was May 4-5, 2010 against the Dodgers in Los Angeles. Milwaukee also won both of those games.

Anatomy of a Comeback:
We may as well start with yesterday’s comeback, the most exciting Brewers game this year. Even starting with the assumption that a team with an offense like the Brewers and their MLB leading sixty-three home runs is never truly out of a game, this was special. Coming back from a such deficit, while the Mets kept scoring off the Brewers bullpen, requires some sort of luck. Enter Jerry Blevins. Below is the pitch chart of a man who had a very bad Sunday: 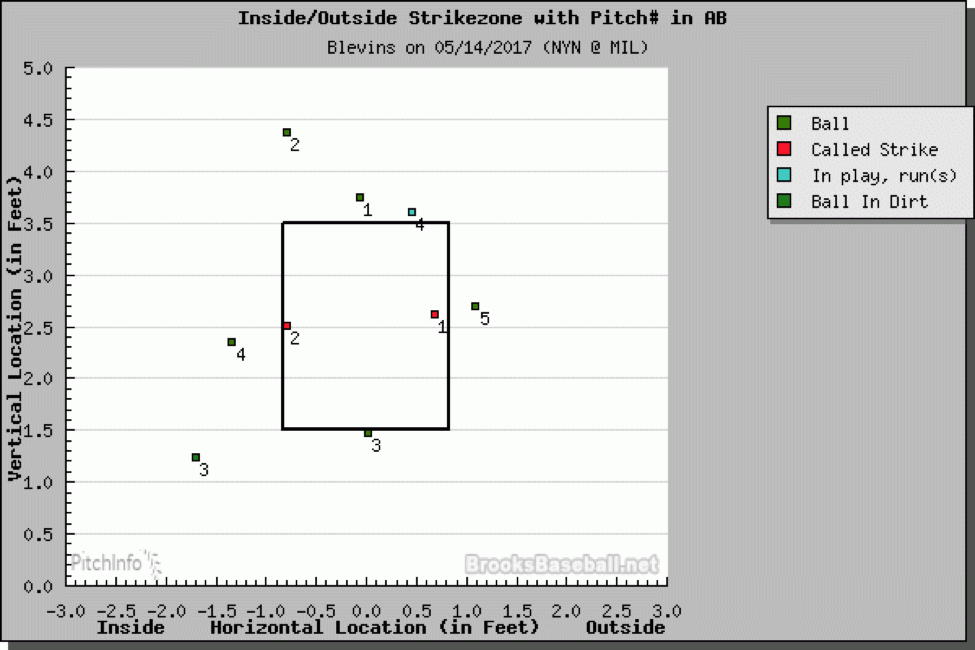 The good news for Blevins is that he left nothing over the plate. Of course, the flipside is that he couldn’t find the zone. Even Jonathan Villar’s home run was on a pitch outside of the strike zone. The Brewers’ win expectancy jumped from 6.1 percent to 18.3 percent in just two batters, thanks to Blevins. That sequence in the 7th inning gave the Brewers real life.

The winning runs were delivered by a Manny Pina three run home run off Addison Reed. Reed clearly had a plan to bust Pina low and away, where he threw six of the seven pitches of the at bat. This seems to be the current book on Pina judging by the red in the below zone profile: 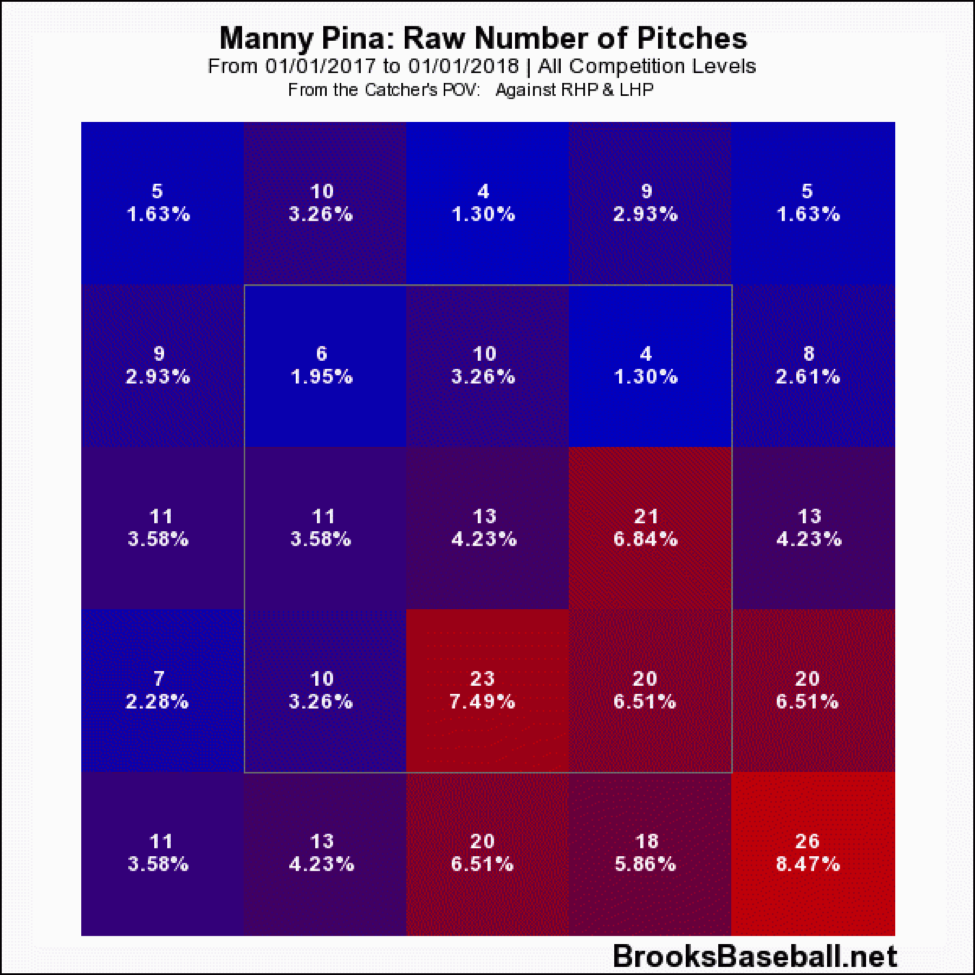 The problem with everyone pitching in a specific zone, is that is allows Pina to lock in on a location and let it rip. While this is a small sample, Pina is hitting .300 in those seven red/maroon zones, including both of his home runs this season. Reed stuck to the scouting report, only changing Pina’s eye level once. With all the pitches in the same area, the only chance he had was deception with speed. Unfortunately for him and the Mets, after four straight fastballs, Pina was ready for the slider and hit it out.

Corey Knebel finished the game, earning his first save of the season. Knebel ran his scoreless appearance streak to ten games, during which he’s pitched 9.7 innings, striking out 16 batters, and only allowing six baserunners. Knebel was expected to be a back of the bullpen anchor and closer in waiting, and he has taken a dramatic step forward. His 1.48 DRA is less than half his career number of 3.53. The most noticeable aspect of this season has been the number of swinging strikes he’s drawing from batters, specifically with his fastball. Not only has his whiff percentage on the fastball jumped from 9.63 percent to 18.04 percent, but he’s already induced more total whiffs on that pitch than he did in all of 2016.

While there are some slight increases in terms of velocity, vertical movement and horizontal movement from 2016 to 2017, the biggest change I’ve seen is location. Last year, he lived on his glove side, trying to keep the ball low and away from righties, while going in on left handers. But this season he’s radically changed his approach, going up and in on righties and away from lefties. Batters aren’t hitting with any power up in the zone against Knebel, but they keep swinging. The Brewers are sitting one game behind the Cardinals for first place in the N.L. Central and currently hold a wild card spot. The ascendance of Knebel has stabilized a bullpen which ranks 11th in reliever DRA, but has suffered some high profile failures from Neftali Feliz and Carlos Torres.

Looking Ahead: After a hugely successful 5-1 homestead, the Brewers are heading on the road for the next week. First up is a trip to San Diego to face the Padres, who have the second worst DRA (5.25) in MLB. The Padres are coming off a road trip to Texas and Chicago where they went 1-4 and fell into last place in the N.L. West. It’s a short trip to California, though. After capping the four game series Thursday afternoon, the Brewers are off to Chicago and have an afternoon game against the Cubs on Friday. The schedule makers did the Brewers no favors this week.

Tags: 2017 Brewers, Brewers analysis, Corey Knebel, Manny Pina |
Andrew Salzman
Follow @RealAndrewSalz
Personal fun facts: I've been to every current MLB stadium, my favorite animals are bears, and I consider myself an expert on fast food. I also really like baseball and am a licensed lawyer.
read more from Andrew Salzman