Quickly, without Googling: through this past weekend’s action, among Major League players with at least 50 plate appearances, who tops the leaderboard for wRC+? Mike Trout? A good guess, if a predictable one, but he’s in second place. Eric Thames? You’re really, really close. As in, same team, same first name, close.

I’m talking about Eric Sogard. Here, I’ll  link the actual leaderboard, because I’m not even offended; you’re right to be skeptical. By no reasonable projection was this thirty-one-year-old Quad-A utility infielder supposed to be the best in baseball at anything, except for possibly Best Impersonation of a College Professor.

There is certainly ample evidence supporting the notion that Sogard is a flash in the pan, waiting for the painful regression back to the mean. But, while expecting him keep up an MVP pace might be overly ambitious, there’s also reason to believe that Sogard has made a couple of late-career adjustments that can pay off with on-field value, especially hitting at the top of Milwaukee’s lineup.

For one thing, let’s start with what Eric Sogard is not doing, and that is hitting the ball hard enough to sustain the comparisons to Barry Bonds. Entering Monday:

Sogard’s average launch angle and average batted ball height both rank well below average, and both his average exit velocity and average velocity generated are dwarfed by the league average as well. In terms of batted ball stats, Sogard ranks in the bottom half of the league, not at the very top.

Furthermore, there’s evidence that he’s been very lucky so far. Since he’s not hitting the ball hard, we can expect that Sogard’s .389 BABIP is going to fall to something closer to his career mark of .274. And a 20 percent HR/FB rate compared to a 2.6 percent career rate is another sure bet for regression. Eric Sogard is not a .390 hitter, not really, and his .244 isolated power mark is hugely inflated. Expecting him to continue either of those torrid paces is utter lunacy.

But there’s one big area of Sogard’s game which he has improved remarkably since his last big-league action in 2015, and that’s his approach at the plate. Sogard’s calling card is his glasses, which inspired his “Nerd Power” nickname, but prior to 2017 the numbers he put up at the plate lead one to wonder if maybe he needed a stronger prescription. His career walk rate in the big leagues is 7.6 percent and his K-rate is 12.4 percent. This year, however, he has walked 14 times in 56 plate appearances, and he has thrice struck out.

That is a level of plate discipline and strike-zone ownership nearly unparalleled in the modern game of baseball. The only player since the turn of the century to walk four times for every strikeout is Barry Bonds, who did it in both 2002 and 2004. Even at AAA Colorado Springs, prior to his call-up, Sogard was walking at a 14 percent clip and striking out 11.2 percent of the time.

A look at the raw swing data tells us that this is no fluke, either. I controlled for players who have seen at least 100 pitches (as pitchers tend to skew the data), and sorted all qualifying hitters by their rate of swinging at pitches out of the zone: 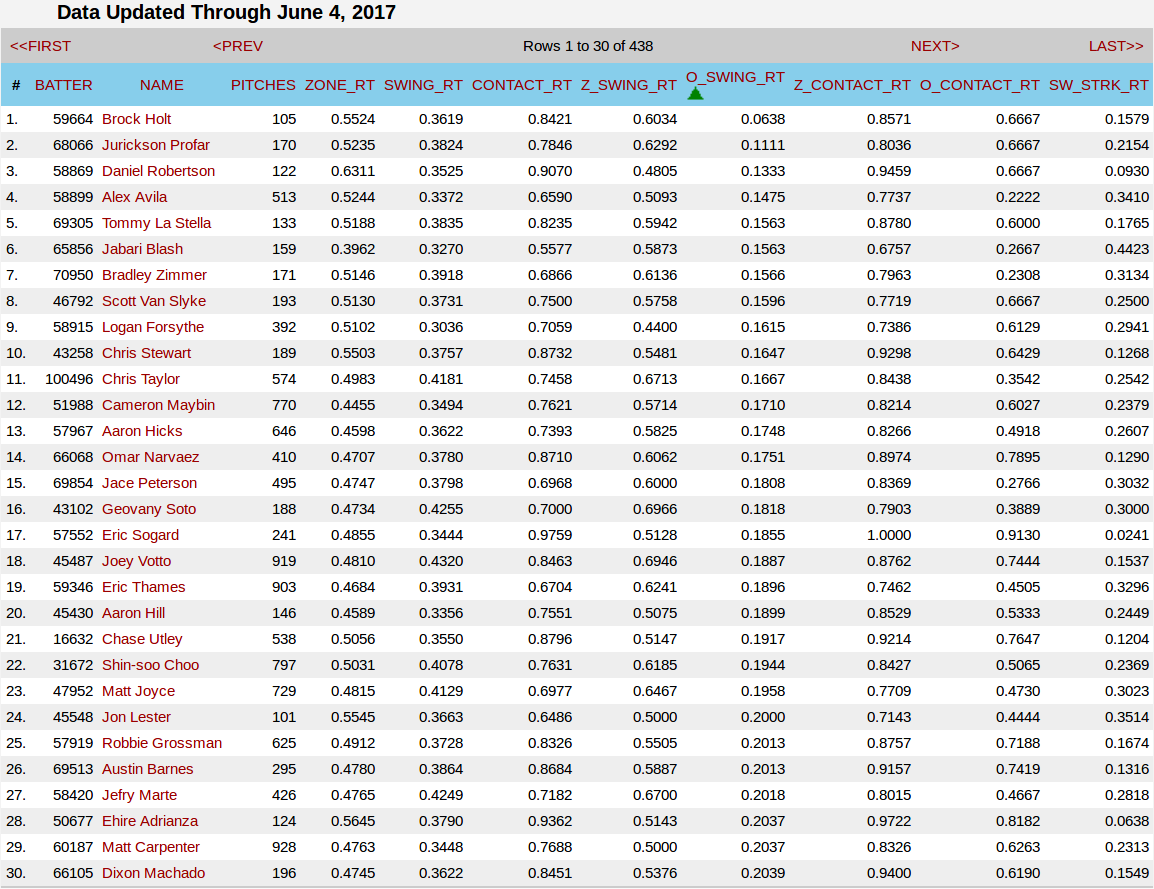 Sogard has been the 17th-best hitter in baseball at laying off of pitches out of the strike zone, placing him in the third percentile of MLB hitters in the valuable but often hidden skill of “not giving the pitcher extra strikes to work with.” Even when the pitcher gets the ball over, though, Sogard will gladly take a called strike if it’s not a pitch he wants; he’s got the seventh-lowest swing rate in the game. The wrong hitter could get into a lot of trouble with this kind of approach, but Sogard has thrived. When he does pull the trigger, his contact rate paces all of baseball: 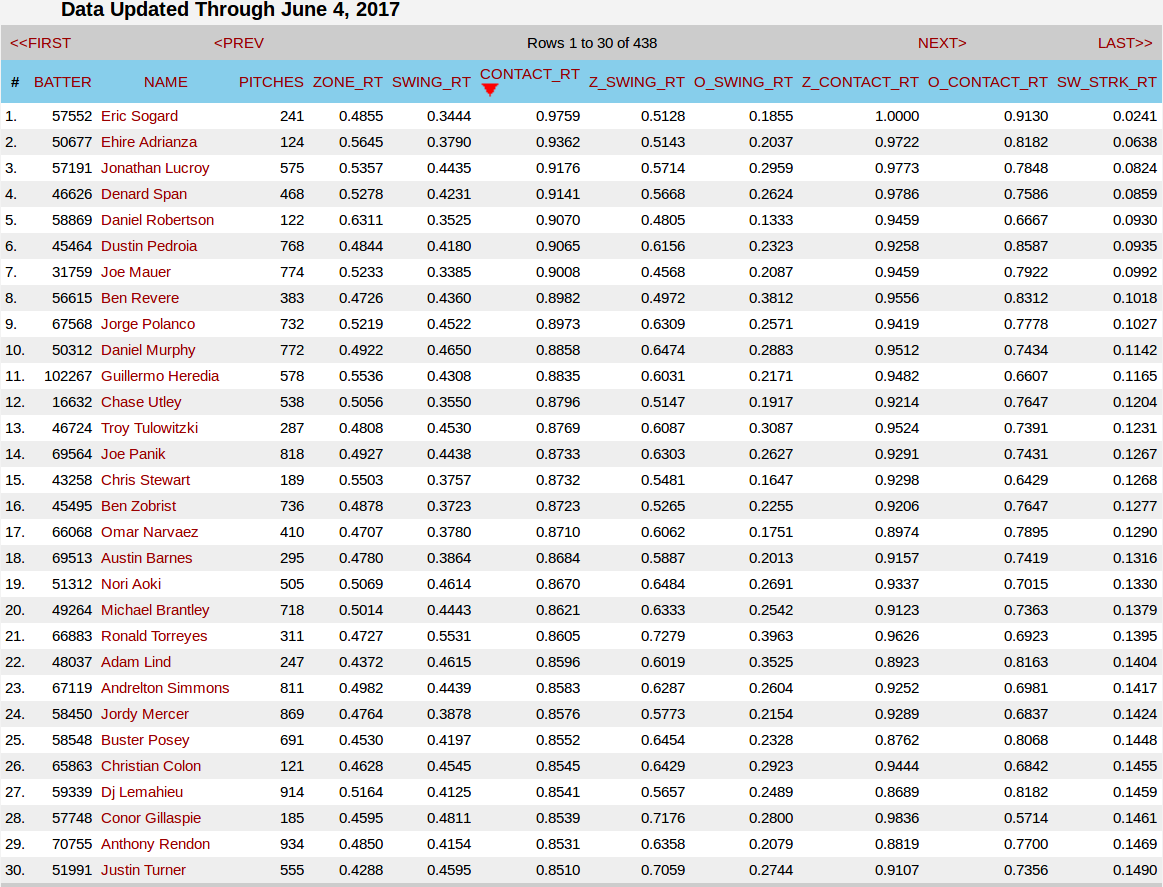 Thanks to the zone profiles at BrooksBaseball, we can break down Sogard’s pickiness and contact skills. He’s a left-handed hitter, and this chart is shown from the catcher’s perspective, so keep that in mind: 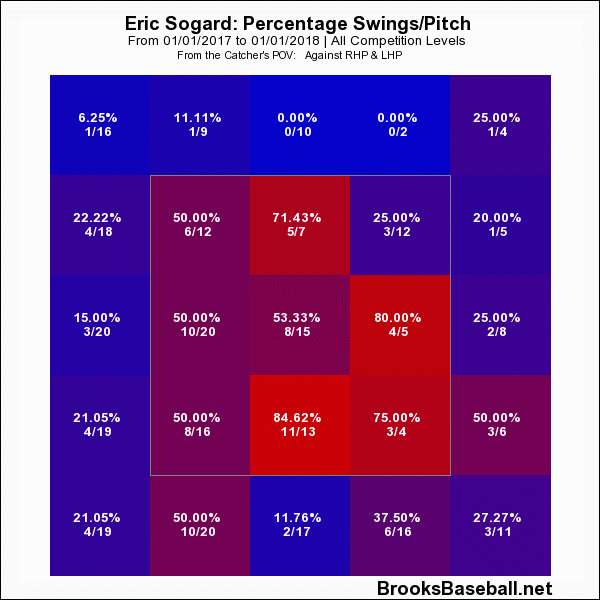 Sogard dislikes the high and tight strike, and he lets it pass at a 75 percent rate. But the rest of the inner two thirds of the plate are where he wants the ball, and he will swing far more than half of the time the ball is put there. Pitches on the outside corner will induce Sogard to swing about half the time, largely if he’s down to his final strike: 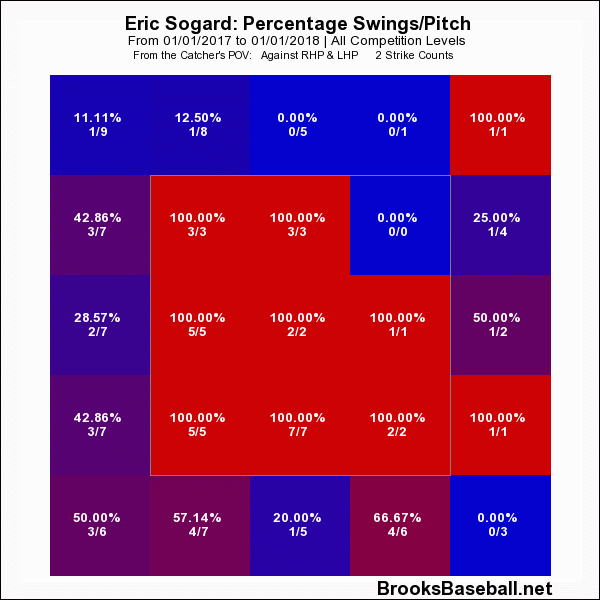 It’s interesting to note that this “outside third” of the plate does extend down below the zone, which would seem to be the only flaw in Sogard’s pitch recognition wizardry. Still, pitchers have attacked that zone with enthusiasm during those two-strike counts and he has yet to strike out on one. Sogard prefers the pitches over the meat of the plate, but his skill for fouling off undesirable strikes is truly impressive and highly useful.

Sogard’s emergence as baseball’s premier contact-and-plate-discipline guy gives the Brewers’ front office and fan base quite a bit to discuss, in no small part because Sogard’s newfound strengths are the exact areas of the game that Jonathan Villar is currently struggling with. Villar’s strikeout rate has soared north of 30 percent this season while his on-base percentage has cratered to .284. Furthermore, he’s hitting the ball on the ground 63 percent of the time. Those are poor numbers for any starter, and downright unacceptable from a leadoff hitter. Villar’s not just getting unlucky, as Andrew Salzman showed in the piece linked above. Pitchers have adjusted to his love of low pitches and are working him up in the zone, and out of the zone, at a far greater rate this year.

Villar’s 2016 season saw him put up more WARP than Sogard has been worth over the course of his entire career, May breakout included. But a majority of fans seem to want Sogard in the lineup permanently, and Villar banished to the bench. Prior to the season, such a thing was positively unthinkable. Then again, so was the concept of the Milwaukee Brewers sitting a full game ahead of the Cubs at this point in the season. With the team in the thick of contention, and a player so perfectly compatible with his position in the field and batting order having a late-career awakening, Villar might not get a chance to reclaim his job.

Still, I think Craig Counsell would be wise to stop short of giving the job to Sogard on too full-time of a basis. Instead, he should utilize the stylistic difference between the two to deploy Villar for the games in which his base-stealing can make the most difference, such as when the opposing catcher has a weak arm, or the opposing pitcher is Jon Lester.

Otherwise, with the two Erics hitting 1-2, Milwaukee has stumbled into a devastating double-barrel weapon atop their lineup. As you’ll notice from the data above referring to swings outside the zone, Sogard and Thames were 17th and 19th in all of baseball, respectively. When the Brewers face off with starting pitchers who struggle to find the strike zone, those pitchers have no margin for error, psychologically. Sogard and Thames are among the best in the game at laying off when the pitcher can’t find the strike zone, and Sogard is the very best at staving off strike three and extending at-bats.

The Brewers’ lineup construction with the Erics atop the order takes pitchers who struggle with command and dumps them unceremoniously into the deep end from the first pitch. There’s almost no chance of a pitcher missing his spots, but getting bailed out by bad swings, and settling down as he starts to feel confident and pitch with purpose. And if he can’t hit the ground running, throwing strikes consistently from the get-go, he’s going to have a first-inning jam on his hands in a hurry.

And even for pitchers who don’t really struggle with command, Sogard and Thames are a pain. Most pitchers today are strikeout pitchers, and they’re trained to nibble around the edges and pound the corners. When Sogard and Thames are working the count, though, that just means that the pitcher throws foul ball after foul ball, essentially wasting all the gas in his tank on trying to get out of a muddy spot.

Counsell talked about how much Sogard and Thames made deGrom work and he wasn’t kidding. He threw 38 of his 105 pitches to those two.

It’s no wonder that the Brewers are 7-0 when Sogard and Thames go 1-2 in the order. And while Eric Sogard is unlikely to continue putting up such a historically outlying performance, especially with regards to hitting for power, he’s made it abundantly clear that he’s a different player than he ever was before, and his new look is a great fit in the leadoff spot. The Brewers should still play the matchups to get Jonathan Villar into the lineup when he’s a strategic fit, but the Sogard-Thames tag team has proven to be simply too effective to break up for now.

This is a great look at Sogard’s success.

I do think his low-pitch swing % might actually bolster his plate discipline credentials. The league as a whole gets those called as strikes. So even though it’s not in the official strike zone, Sogard is swinging at them because they’d probably be called that way anyway. Would be interesting to see if he’s swinging at those below the “official” strike zone more than league average.