The Brewers completed their hot week by taking two of three games from the Padres, maintaining their lead in the National League Central. The weekend was filled with excitement and drama. The teams combined for seventeen home runs across the three games, we saw another Brewers bullpen meltdown, and yesterday featured the first complete game of the season by a Brewers pitcher.

The biggest story of the weekend was Jimmy Nelson throwing his first career complete game in Sunday’s win. If the Brewers are to take themselves seriously as contenders, and their record and underlying performance currently give them no reason not to do so, they need a legitimate top of the rotation starter so they aren’t relying on the offense to bail them out every night. Nelson showed that he’s capable of being that guy, striking out 10 for the third time this season, and throwing a season high 118 pitches.

Nelson has spent the past month, which roughly coincides with his breakout, using the sinker as his primary pitch and sprinkling in some more curveballs, all at the expense of his four seam fastball. At that point opponents had a .234 ISO against his four seamer, so reducing its usage made sense since his other pitches were more effective. So of course yesterday Nelson returned to pumping his four seam fastball to great effect, throwing it forty six times and getting seven whiffs on the pitch.

The other notable aspect of yesterday’s game was Nelson’s curveball usage. He threw the pitch thirty seven times, smashing his previous season high usage of twenty four. His eight whiffs were a season high for the pitch. The curveball has flummoxed hitters all season, producing weak contact and not a lot of power. An interesting thing to note is the horizontal movement that Nelson puts on the pitch. 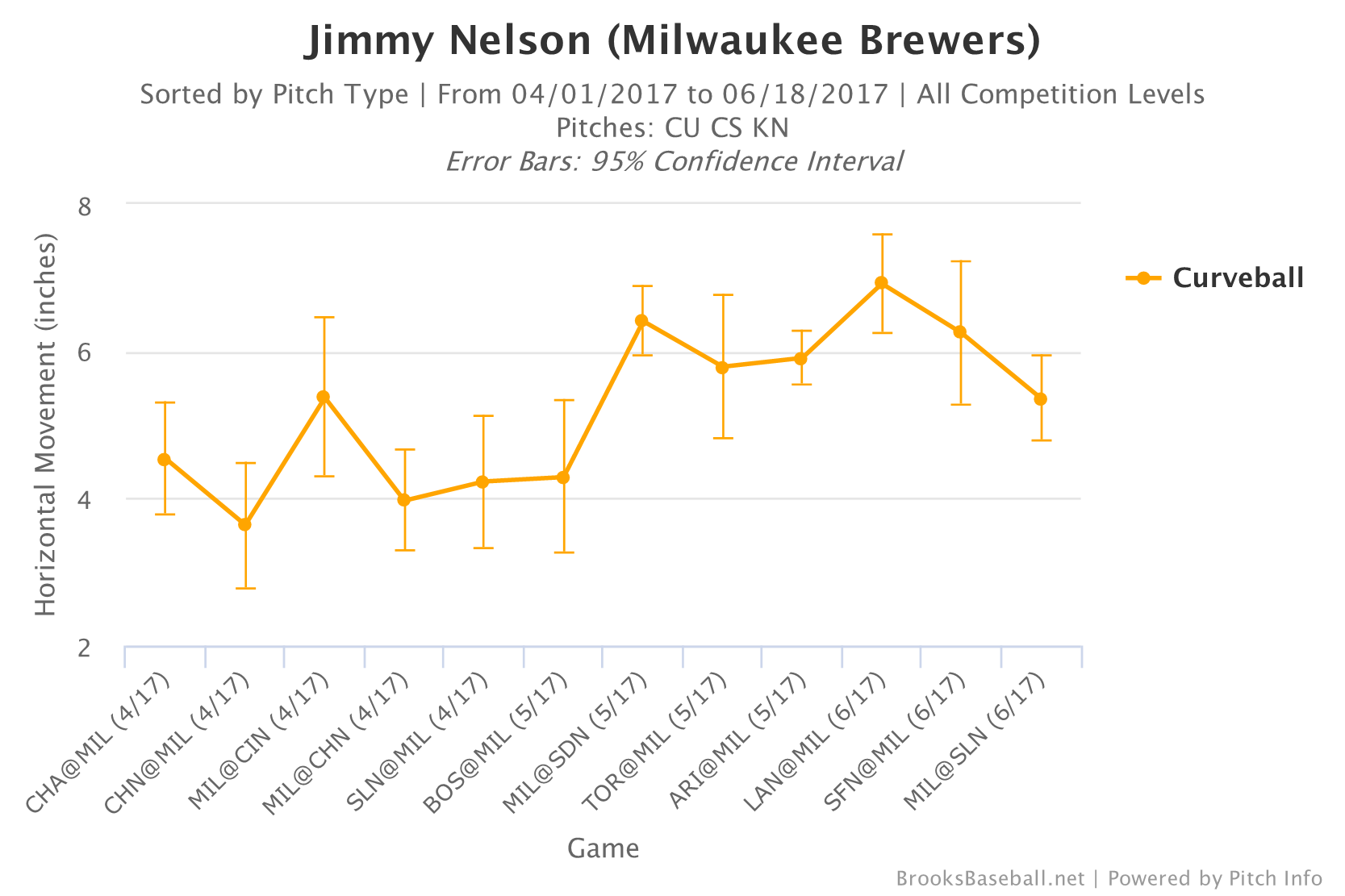 While Nelson got decent movement on the pitch early in the season, he shelved the pitch for two starts in early May. Since then, he’s regularly getting two more inches of movement on the pitch, which is the best movement of his career. The curveball has been the constant in his breakout. If he can sustain this movement, while throwing it this often, he’ll continue to keep hitters off balance and can be the top of the rotation pitcher the Brewers need.

It goes without saying that the Brewers have not been the best defensive team in baseball this season. Over the weekend they committed six errors across three games. While errors are not necessarily the best measure of defensive performance, they had the highest total in the National League entering Sunday’s games with forty nine total miscues. Baseball Prospectus has a coverall defensive statistic named Park-Adjusted Defensive Efficiency (PADE) which looks at how a defense makes outs on balls in play, adjusting for the park. The Brewers’ current PADE is -1.26, 8th worst in MLB and ahead of only the Mets and Giants in the National League. Their number is already much worse than the -0.12 and -.026 the team posted in 2016 and 2015. While the team is good at converting ground balls into outs, and middle of the pack for fly balls, they’re in last place in MLB for line drives, which hurts their ranking.

According to Ultimate Zone Rating (UZR), another all in one defensive stat, the Brewers defense has cost the team -9.3 runs, placing them 23rd in MLB. The biggest culprit in this ranking is of course ErrR, also known as error runs, which looks at how many errors a player commits relative to a league average player. The Brewers are 29th in this measure, at -8.5 runs on the season. The next closest National League team is Pittsburgh at -3.9 runs. Yes, your eyes have not been deceiving you, the Brewers commit a ghastly amount of errors compared to other teams, with the biggest culprit on the team being Jonathan Villar. Villar is also the second worst position player in MLB by this metric. If this had turned out to be a rebuilding year, maybe you can live with these types of poor plays, but with the team in contention, they need to tighten up.

Up Next: The Brewers conclude this home stand with a four game series against Pittsburgh. The Pirates lost two of three games over the weekend against the Cubs, falling to six games behind the division leading Brewers.

Tags: 2017 Brewers, 2017 Brewers analysis, Brewers Fielding Analysis, Jimmy Nelson |
Andrew Salzman
Follow @RealAndrewSalz
Personal fun facts: I've been to every current MLB stadium, my favorite animals are bears, and I consider myself an expert on fast food. I also really like baseball and am a licensed lawyer.
read more from Andrew Salzman