Milwaukee is a very small baseball market, but as long as the product is halfway decent, Milwaukeeans show up to the the park in droves. They rank tenth in attendance this year, pulling in 31,161 fans per game, which is more than the contending Nationals and more than the New York Mets. On Thursday home games this season the Brewers average 29,782 patrons, right around their season average, though not as much as your typical weekend game. Capacity at Miller Park is 41,900, so on any given night Milwaukee is filling three quarters of the place, and on weekends and for important games, selling out more often than not.

Yet when the Cubs come to town, the stadium is often dominated by Chicagoans, and Milwaukee fans get ripped by media both local and national as a result. “How can they let this happen? Why don’t they buy up all of the tickets?” The answer, sabermetrically speaking, is that the Cub fans who regularly travel to Miller Park are bad people. Jackholes. Human Castoreum. The team still invites Jim Belushi to things in order to appeal to THESE SPECIFIC PEOPLE.

I don’t mean to besmirch all Cub fans. The Cub fans who regularly attend games in the friendly confines of Wrigley Field are generally friendly. I lived here: 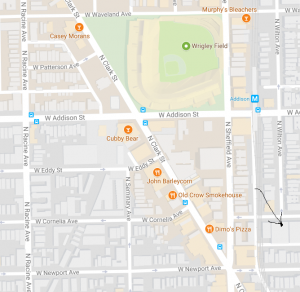 for 5 years from 2005 until 2010 and I have attended somewhere around 100 games at Wrigley Field, frequently wearing Brewer gear. I’ve never had a problem, and highly recommend making the trek to Chicago if you haven’t been before.

But the Cub fans who travel to Miller Park  are not your typical Cub fans. They tend to be actively hostile to the home crowd, they start fights, they drink far too much, spill beer on people with impunity, and make viewing the game from the stands an incredibly unpleasant experience. I tweeted this last night just to gather some stories about people’s experiences.

It’s not the only reason, but one reason so many Brewer fans don’t go to these is that the Cub fans who travel are (censored)

While the plural of anecdote isn’t data, just take a look at all of this “anecdot-a”:

This is a fact. Dealing with them last year is primary reason why I didn’t get tickets to any of the games this year — Phil (@pshackto) September 22, 2017

I would never take my kids to a Brewer-Cub game because of this kind of thing:

Been to Brewers/Cubs at Wrigley-zero problems. Final straw for Brewers/Cubs at MP was drunk Cubs fans knocking over my 5 year old & laughing — Andy Chaney (@chaneysystems) September 22, 2017

I personally have had this happen to me as well:

I had a lot of Chicago folks telling me that Brewer fans should just buy up all of the tickets if they want to avoid harassment from mouth-breathing troglodytes, but that’s impossible for several reasons. First, if you sell on StubHub you really can’t control who buys them. And there are people like my parents (or anyone of my general age’s parents) and they just don’t want to put up with this garbage.

A lot of season ticket holders are older, and more likely to bow out of the games where obnoxiousness is the norm. They’re also more likely to make the decision to sell their tickets early, as this was not scheduled to be a contending year. It’s also worth noting that Cubs fans do not in fact buy up all of their own tickets. I have been to a game at Wrigley in which a majority of fans cheered for the St. Louis Cardinals. Also, there are literally thousands of available tickets for the final Cub home series as of this moment.  Buying up all of the tickets is a practical impossibility, no team does it, and in any case, it only takes about five percent of the crowd to ruin the experience for everyone. And ruin it they will:

Huge factor for me. Every time they visit, you encounter belligerent drunks whose goal it is to make a scene. https://t.co/z9fZ3vw1Bg

Spitting was a common theme.

I have never had an issue at Wrigley. Miller Park? I’ve been spit on by a Cubs fan. Only fan base I can’t tolerate https://t.co/DIhlF0pYUV

1st time I went to one I got beer thrown on me. 2nd time I couldn’t see the game bc Cubs fans trying to fight everyone. Haven’t been since.

My mentions have many more examples. So why does this happen? I have a few theories.

I think to some extent there is a “mob mentality” that can develop with visiting fans, and it becomes a point of pride to dominate the proceedings. I also think that those who travel up to Milwaukee are not your average city-dweller who is content to just hop on the Red Line for a fine afternoon of baseball. What we see here is North suburbanites who think it’s too much trouble to head into Wrigleyville, in the city, with the hassle of parking and the all the crime. Better to go up North to the the park with ample parking and no traffic, where you need not travel into the big scary world around you. This becomes a football-style event and these people feel they have to make the most out of the trip. They are traveling, they are the true die-hards, and they will be heard. And smelled. And far too often, felt.

The other issue is that as the problem has become more obvious and more apparent, those Brewer fans who might temper the atmosphere stay home, leaving only our own troublemakers, at which point everything spirals out of control. Older people don’t put up with troublemakers, and families with kids will stay away.  This just isn’t that fun. The Miller Park authorities should be tougher on bad behavior than the are, but it’s also so widespread that policing everything is next to impossible.

I don’t really have a good solution to this issue. Taking a harder line on enforcement would be a good start. Limiting alcohol sales would go over like a traveling Cub fan in church, but it might be a good temporary idea to restore order. Unfortunately there really is not a good way to screen out people with an (847) or (224) area code. The Brewer organization is generally excellent at creating a fun baseball experience for everyone, but every year, when these games come up, they are simply miserable for the home crowd. If you can go and put up with all of this garbage this weekend, you’re doing a public service, but most people have better ways to spend an evening than being yelled at by some north-suburbanite who considers Gibson’s the summit of Chicago cuisine and reeks of Portillo’s Italian beef juice and considers his own city, which he will proudly announce as his home, too scary and bothersome to actually enter, and so whiles away weekends in Lake Geneva pounding 312s until the banality of it all manifests in an overwhelming need to harangue some kid from a smaller city just because he lacks the birthright and sophistication to understand just how superior you are for your 2-hour proximity by car (because god forbid you take PUBLIC TRANSPORTATION) from the epicenter of America’s 3rd largest city, which you just drove through the center of the other day to get to Oak Brook to see if their Gibson’s is as good as the one by O’Hare, because god forbid you stop inside the actual city for a world class meal that isn’t an enormous piece of overcooked meat, you mustachioed, local-newsperson-worshipping doofus.

Well, sure. It’s not fun for these mouthbreathers to chant “Let’s go, Cubbies” in Chicago, because everyone else is doing it. But it’s edgy and cool to do it at someone else’s ballpark, where you can make the family next to you cringe.
It was an amazing bit of Chicagenfreude Saturday, watching them celebrate prematurely after the Cubs scored in the top of the 10th, fist-bumping and congratulating one another; only to have all 20,000 of them go silent when Shaw hit the game-winner in the bottom of the inning. That almost–almost–made up for all the Northside BS I’ve had to put up with over the years.