As regular readers of this website are undoubtedly aware at this point, Statcast gives us a wealth of information that we did not previously have access to.  We are now able to do more in-depth research than was previously possible, and the results are—at the very least—interesting.  I think the jury is still out about how useful or predictive some of Statcast’s measurements are; for example, earlier this year, I used Keon Broxton as an example to write about whether exit velocity is predictive or descriptive.

By itself, this trend is not surprising.  Santana was a relatively highly regarded prospect, and 2017 was his first full big league season.  He took a step forward and produced well, so we would expect to be able to look at his peripherals and see improvements.  Now, though, we can look even further at any differences in how the ball came off his bat.

As I’m sure you could guess, that is the point of this research at which I found something interesting.  As I laid out above, Santana’s power numbers improved this year; he hit more home runs, and he produced more extra base hits.  Not surprisingly, then, the average distance of his contact increased as well, from 171 feet in 2016 to 175 feet in 2017.

One of the hot topics in baseball analysis this year was the “launch angle revolution,” as players began to try and hit the ball in the air to increase their power.  Santana was one of the adherents, as he raised his launch angle  from 9.4 degrees to 10.5 in 2017.  This is still a low number; league leader Joey Gallo’s average launch angle was 22.7 degrees, and Santana’s 10.5 ranks 226th of the 387 players with at least 100 at bats.

Santana’s rising launch angle was not accompanied by an increased exit velocity; in fact, his exit velocity fell significantly from 92.8 mph in 2016 to 89.3 mph in 2017.  The fact that he improved his results so much while his exit velocity decreased suggests that exit velocity does not portend success, but I do not want to draw overarching conclusions about a statistic from studying just one example.  It suffices for this conversation to say that Santana hit the ball with less authority but higher in the air, and he saw improvements.

It is hard to decouple the launch angle revolution from the change in the ball.  More fly balls are becoming home runs because the ball itself has changed, so hitters are incentivized to hit the ball in the air.  Santana is among those hitters who took advantage of the change and hit more fly balls, and he benefited. 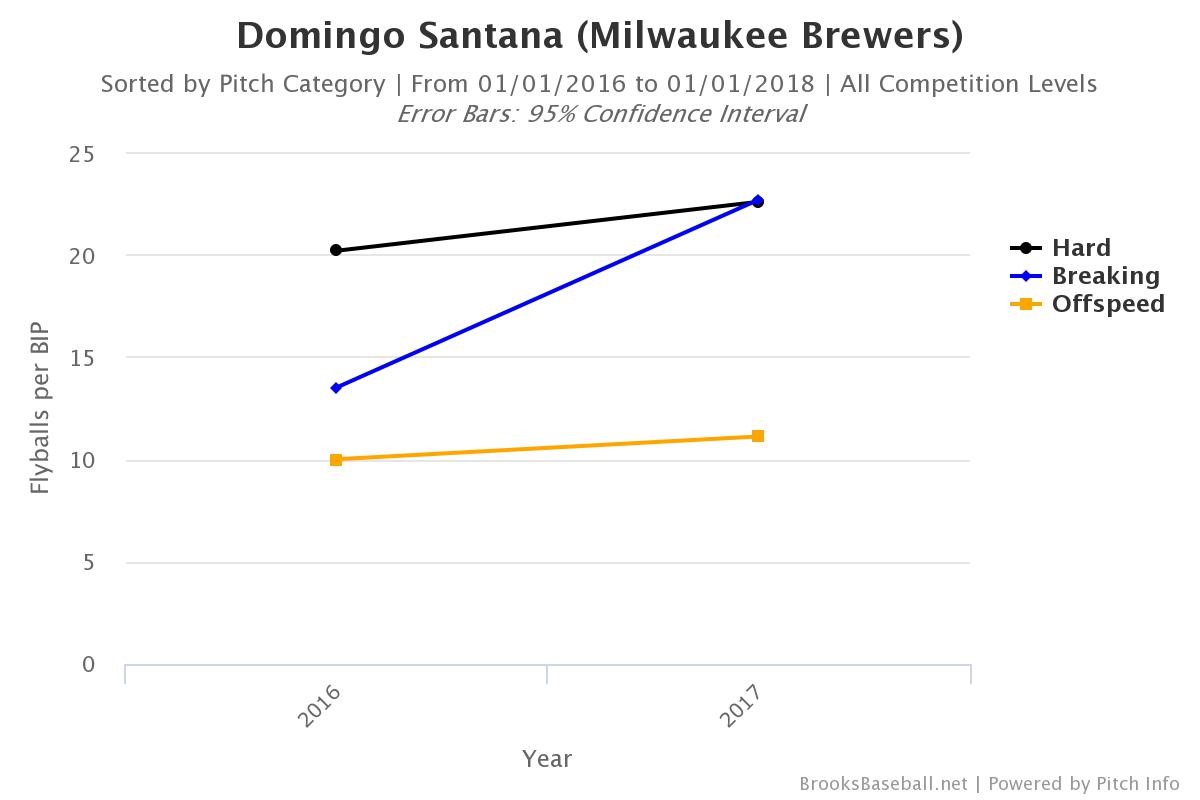 One thing we don’t know is whether this type of trade-off would have occurred in an environment with a different ball; for example, have hitters been losing exit velocity as they improve their power for years, and we just couldn’t measure it?  This could be a natural outgrowth of hitter development.  Because of his generally low launch angle, Santana is a good example of this.  He did not drastically change his approach and end up near the top of the league in launch angle, but rather he generated a little bit more loft and was able to leverage some of his natural power into hitting more home runs.  On the other hand, of course, he hit thirty home runs without hitting the ball in the air as much as the league’s home run leaders.  Regardless, because of the change in his approach, Santana was a more successful hitter in 2017, and that is to his credit.