With Corey Knebel sidelined, many are clamoring for the excellent Josh Hader to take over the all-important “closer” role. The Brewers have mostly resisted so far, and don’t really seem interested in moving their fireman out of his current role, which is a good thing because in his current role, he’s essentially changing the way baseball is played. Really. This is new, and you should all get excited. Oh, that reminds me, earlier this year I had this discussion with Nicholas Zettel. 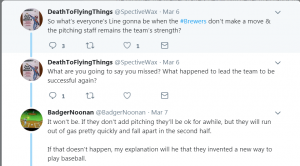 I’m serious about my answer, and so far, this is exactly what is happening. What do I mean when I say Craig Counsell and the Brewers found a new way to play baseball? Well, to start things off, it’s important to understand the “times through the order penalty” (TTTOP for the rest of this post). Pitchers, either due to fatigue, or familiarity with the lineup, generally get worse the more they see a hitter in any given game. This results in the sixth and fifth innings (respectively) typically being the highest scoring innings in a major league baseball game after the first. (The first inning is the highest scoring inning due to the offense’s ability to line up their best hitters to start the game.)

Too much ink has been spilt by SABRmetrics people yelling at saves. The ninth is frequently a high leverage situation, and while it’s not optimal to have a set closer, there have been thousands of dumber ideas in baseball, and in sports generally. One of those terrible ideas is the notion that over the course of a game, after your starter has departed, you should use relievers from worst to best until the game is over. Generally, your seventh inning guy is worse than your eighth inning guy, who is worse than your closer. If you have to go to your sixth inning guy, pray, hope, and watch out. This strategy creates the perverse result of exacerbating the TTTOP by replacing your struggling starter with one of your worst relief pitchers.

Instead of all of this arbitrary nonsense, the Brewers have taken a novel approach. They are happily accepting the best two thirds of starters like Brent Suter and Jhoulys Chacin, and replacing the back third with the superhuman Josh Hader.

Suter is an extreme case of TTTOP, as opponents have OPSs of .593-.783-1.007 on his first, second, and third trips through the lineup, respectively. Chacin’s numbers are .676-.733-.766 for his career, which isn’t bad at all, but he still does get worse over the course of the game. Zach Davies often gets off to a bit of a rough start, but just like everyone else, the third time gets him as opponents OPS .754 the first time around, .691 the second, and .764 the third. Hader, by the way, has allowed an OPS-against of .331 this year, and while he has pitched multiple innings regularly, he has never turned over the order. For his career, his OPS-against is .501.

Chris Sale, the outstanding starter for the Red Sox, formerly of the White Sox, is a frequent comparable for Hader due primarily to left-handedness and hair, and those who wish to push Hader to start often cite Sale as the example. I used to be in favor of pushing everyone into a starting role if there was a chance it would work, but I’ve changed my mind on Hader. The Brewers have figured out the best way to use Hader, and they should keep at it. They should be widely lauded as progressive geniuses on this front, and what they’ve actually managed to do is to turn average (or in some instances below average) pitchers into Chris Sale 2-3 times per week.

Hader has been completely dominant in 2018, having struck out 25 of 41 batters faced, walking only 3, and allowing an opposing slash line of .079/.146/.184. That is simply ridiculous. The Brewers’ strategy with most of their starters has been to let them traverse the lineup twice, and then go to Hader at the first sign of trouble on their third trip. With Knebel out and Guerra pitching well, they have strayed from this a bit, but that’s a good thing. There is no reason to be set in their ways on the bullpen, and it’s good to see that Counsell is so adept at either reading situations, or taking advice from the numbers guys, or both.

The bottom line is that every time Hader takes the 3rd turn for one of the back-end guys, he’s taking away a big run-scoring chance for the Brewers’ opponent, and he’s preventing that pitcher from being exposed. Hader has shown himself capable of throwing about two innings every other day, and so he can pull this off two or three times per week. Once Hader does his job, the “traditional” Brewer bullpen is more than capable of taking it the rest of the way. With the exception of Oliver Drake, everyone has been excellent in the early going, and if Knebel can get healthy, the Jeffress-Barnes-Knebel combo should be as deadly as any in the league, with a game Matt Albers backing them up.

My biggest fear when this all began was that they would burn out the bullpen, and maybe they will, but it’s clear that the front office and Counsell have thought about this, and have a plan to deal with it. They have freely swapped out pitchers from Colorado Springs, and Counsell is open in his press conferences about the fact that they have a certain number of bullpen innings in mind for the season.

I started the season as a huge skeptic on this strategy, but I’m coming around to it. It is, if nothing else, an extremely creative tactic, that makes excellent use of a rare asset in Hader. The recognition of the 5th and 6th innings as fixable trouble spots seems obvious in retrospect, and if the pen can hold up for 162 games, the Brewers will wind up with one of the best staffs in the league, all because Josh Hader acts as a starting pitcher catalyst.

The Indians showed with Andrew Miller that this could work. Now, Chad Green, Adam Ottavino, Adam Cimber and Craig Stammen among others are being used similarly.

In Knebel’s absence, I see Counsell using Hader, Barnes and Jeffress for multi inning roles. He rotates them based on matchup and workload. It truly is ‘managing’ your assets as opposed to rigid programs based on the status quo.

The really cool thing is that Kodi Medeiros is lurking in the minor leagues and will likely join the party in 2 seasons.

In a lot of ways, this approach is how lower level pitchers are used, especially in tournament situations. Absolutely starting pitching is important. Closers have risen in importance because teams are going to empty their bench with their best bats at the end of the game. But there are critical times that often come up earlier – whether it’s the 6th, 7th or 8th where you face the heart of a teams order. Or base runners are on with a prime scoring opportunity. In the youth game, I see it as putting my best pitcher out there when there’s a bases loaded jam because he can save a bunch of runs – and that’s more valuable than getting the last 3 batters out.