I picked up an Oculus Go the other day, a nifty little self-contained virtual reality gadget. The Go doesn’t require you to insert your phone into the headset like the Gear VR and its ilk, and it doesn’t rely on an external computer or console. The simplicity makes for easy set-up and use, which is a welcome development for VR. Too often setting up all of the gear is a 10-minute event, and a much larger deterrent to casual use than anything else in an age where most people can’t be bothered to change out a blu-ray disc, but once the Oculus Go is finished with initial setup, firing it up is a matter of seconds. 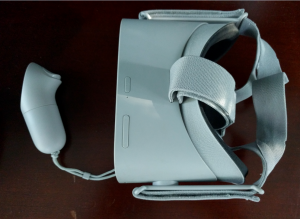 The picture is “pretty good.” It can get a bit grainy at times, and the device is probably slightly underpowered, but it seems to produce a very good picture when you are staring straight ahead, and cheats a bit in your peripheral vision. If you are looking for graphical flaws you will find them, but if you let yourself get taken in by the experience, as I did watching a random concert the other day, the computing power and picture quality are more than sufficient. The controller is also well designed, and intuitive enough that anyone can instantly understand how to use it. The build in speakers are also perfectly fine, but the device really shines with headphones.

For me, the promise of VR sports viewing has always been a big draw, and the demos available on the Go, one for a soccer match, and one for a Houston Rockets game, show exactly why that is.

Putting a 360 degree camera at various locations in an arena can put you in a front row seat, or even on the field. I enjoy the stadium experience more than most, and the idea of being able to watch an NFL game with a full field view, or a baseball game from any of my preferred locations was enticing.

Oculus provides access to MLB games through their “Oculus Venues” app, which is part chatroom, and part simulated venue. When you enter you see theater seats all around you containing the avatars of other people. You can interact with them, though it’s a little on the nightmarish side as the avatars are primitive, and the way in which they turn to face you is disconcerting. It would be a nice feature if you could “sit” with a friend, but I don’t think there is way to actually coordinate seat location with another Go user, though I was running solo and I could be wrong. Oculus does police for rowdy participants and you have to agree to certain behavioral standards before entering. There is a button that allows you to report anyone who is misbehaving, and while you can talk to avatars, you can also put yourself on mute and choose a “solo” option, which is what I did most, but not all of the time.

This interface worked very well for a “School Night” concert I tuned into. Concerts, after all, take part on stage, and the theater venue experience was a good approximation of what being there would actually be like. I also took in a few minutes of a show by Nathaniel Rateliff and the Night Sweats, which worked well, and shunted you between the front row, and an on-stage camera. Sound quality was quite good for a live show in both instances, and having some crowd noise for additional ambience was a nice touch. Other than the fact that Nathaniel Rateliff’s pants are alarmingly tight, for a stage production the interface was perfect.

The problem with baseball is that it’s not a stage production, and sports in general require greater creativity with how they are presented in VR. My expectations for this Giants-Diamondbacks game were, I thought, pretty modest. I wanted to be able to take in the game as if I was in the park from a variety of vantage points, preferably of my choosing. I wanted the option to listen to announcers, or just for latent crowd noise. I didn’t get any of that.

Instead, Oculus Venues presents the game as a “simulation of watching the game on TV,” literally just putting the broadcast on a screen in front of you, in the same theater with the creepy avatars watching the same screen. VR’s entire purpose is to create a more immersive experience, and this just misses the point entirely. The lack of immersive experience also highlights the graphical drawbacks of the system itself as images on the faux big-screen can look grainy and far away.

The broadcast isn’t unique in any way, featuring the exact same camera angles and announcers you could experience on your television or tablet. The avatars around you also become more sinister with lack of engagement. as did mine. It wasn’t on purpose, but looking around just to survey the scene can lead you to staring at people out of your vacant, mannequin face for longer than is socially acceptable. This avatar chatroom could be valuable if it were easy to select the people sitting near you. Watching a game with an out-of-town buddy would be a fantastic experience, and one well worth paying for. Seeing the game with strangers composed of a random subset of VR enthusiasts, on the other hand, is unnecessarily distracting.

It’s still relatively early in the VR lifecycle, and part of the problem is that no one really knows what a passive experience should look like yet, but it’s safe to say it shouldn’t resemble the current Oculus baseball interface.  It’s hard enough to convince a person to put on a ridiculous headset when the other options available for entertainment consumption are so appealing. One of my hopes upon reading up on this product was that Baseball Prospectus might be able to organize watching parties in an immersive baseball environment, combining writer chats with the in-game, in-stadium experience. Given the current state of the interface, something like that is still a ways away.