In the middle of a pennant race for the Brewers, with a division fight against the Cubs potentially fading into a chance to solidify the top Wild Card seed, our beloved club may have accomplished something unexpected: the Brewers may have defined an adjustment and future role for RHP Junior Guerra just in time for the playoffs.

Junior Guerra has had an up-and-down season, which will deserve more analytical scrutiny once the season closes. Brewers fans largely wrote off Guerra after the righty experienced a forearm injury in July (on DL July 14-24), which preceded a truly dreadful stretch of baseball. Returning from the disabled list, Guerra started eight games, ultimately working 37.3 innings while allowing 38 runs (!!!) and a 32 strike out / 16 walk / 8 homer / 1.08 Groundball:Flyball peripheral performance. At this point, the Brewers replaced Guerra in the rotation with newly acquired southpaw Gio Gonzalez, himself looking for some redemption in a new locale.

What is notable, however, is that despite Guerra’s large decline from May through September, the righty ultimately provided (approximately) average production throughout the season. Ironically, Gio Gonzalez matches this trend for Guerra as well, as the lefty averaged approximately Four Runs Prevented for the Nationals despite falling to below average production by the time he was traded to Milwaukee.

So, the Brewers entered a playoff stretch run by moving one formerly productive starting pitcher into the rotation at the expense of another formerly productive starting pitcher. Yet, Craig Counsell provided Guerra a couple of opportunities to define his relief role while working in close deficits on September 11 and September 15, and the righty also made another appearance during last night’s series closing victory against the Reds.

I’ve dreamed on a Guerra relief role since the beginning, considering the righty’s command stature and splitter as two of the reasons that the righty might morph from a starting pitcher into a reliever. What is fascinating, however, is that while Guerra is absolutely lights out over 3.7 relief innings thus far (5 K / 0 BB / 0 HR / 1.33 GB:FB), that formerly elite splitter is nowhere to be seen. In fact, according to Brooks Baseball, entering Wednesday night’s match-up against the Reds, the righty had almost exclusively worked fastball / breaking ball in relief. At the time of this writing, Brooks Baseball data had yet to reflect Guerra’s last outing, but raw Gameday Play-By-Play suggests that Guerra was once more a two-pitch pitcher.

What is especially stunning about Guerra moving to a fastball / breaking ball relief profile is that the hurler is not even using his slider. According to Brooks Baseball, Guerra’s velocity, vertical movement, and horizontal movement profile on his breaking ball matches his previous “curveball,” rather than his well-known “slider.” Here’s how Guerra’s pitch profile looked as a starting pitcher in 2018:

To emphasize just how different this new version of Guerra looks from the old Guerra, here’s how Brooks Baseball classified his relief work in September 2017:

While it is too early to make note of any velocity changes on the fastball based on standard deviation on Guerra’s September fastballs as a starter and a reliever, it is worth diving into the sharp arsenal change exhibited by Guerra. According to Brooks Baseball, Guerra’s fastball / breaking ball blend is producing more whiffs and groundballs on his fastball than his starting pitching usage of the pitch, while the “curveball” effectively is acting like a splitter in terms of whiffs and groundballs. Notably, this combination of pitches finds Guerra working in entirely new areas of the strike zone with his fastball compared to his previous usage, with the caveat that this is an extremely small number of pitches to draw any meaningful conclusions.

With this curveball offering, however, Guerra has already thrown nearly as many pitches as a reliever compared to his entire time as a starter in 2018, and here it is worth noting that Guerra is scattering the pitch more evenly across the bottom of the strike zone while also moving it away from the upper-armside (inside against a righty bat) area of the zone: 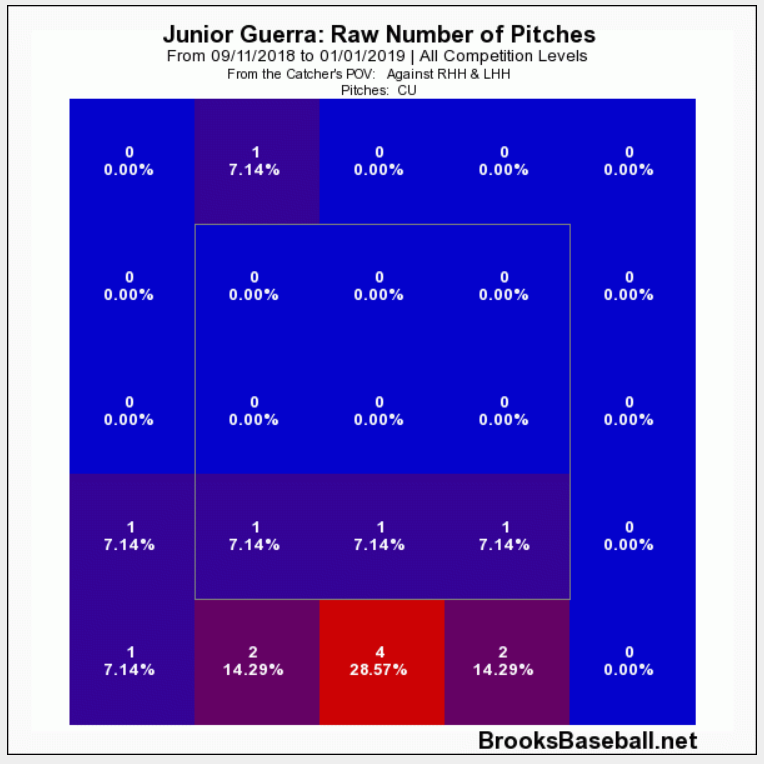 Ultimately, I do not think assessing Guerra’s arsenal shift as a reliever is “much ado about nothing,” as the righty is suddenly answering a crucial question entering potential playoff series: who can help to stretch out close deficits? Granted, in the playoffs, pitchers like Jeremy Jeffress and Josh Hader will probably experience higher workloads. However, since the Brewers seemingly base Hader’s workload off of his recovery time, adding another reliever that can effectively work a couple of frames is extremely important (especially as starting pitchers work shorter outings as the season winds down). It cannot be understated that Guerra is also working for his future with Milwaukee, a club that is also arguably designing an unorthodox pitching staff that is based around systemic runs prevention rather than standard 1-through-5 starting pitching assessments. This is undoubtedly one reason Guerra had a job to begin with, and undoubtedly one reason the Brewers gave the righty every chance to succeed as a starter. Guerra the reliever could still potentially fit into a 2019 pitching staff that may double down on amorphous roles after general 2018 Runs Prevented success.

Now, perhaps it is time to dream bigger on that relief role for the stretch run, potentially the playoffs, and for 2019; in this regard, it is also time to scrutinize a relief role for Guerra. If it can be stated that Guerra exhausted the utility of his fastball / splitter / slider arsenal in Milwaukee, a new look at a hard, rising fastball and slightly slower curve combination could find the age-33 hurler staying on for at least one more go ’round. In this regard, it’s interesting to think about the pitchers in Milwaukee that have benefited from learning Guerra’s splitter, and now view the righty as a beneficiary of Pitching Coach Derek Johnson’s curveball instruction (recall that this is the pitch that revitalized Jimmy Nelson and Chase Anderson). When one role ends for a pitcher, a new pitch can present a new role; while this should not be viewed as magical thinking, nor a fail-proof development, for now it should be viewed as a new opportunity for Guerra to bolster Milwaukee’s high leverage relief group.