Prior to the end of the regular season, my colleague at BP Milwaukee, Sean Roberts, posited that Brandon Woodruff could be a “secret weapon” for the Milwaukee Brewers during the playoffs. I don’t think he meant it in quite such a literal sense, however. Woodruff was a main protagonist of “The Wade Miley Gambit,” relieving the southpaw after his one-batter start in game five of the NLCS. Woodruff would go on to deliver 5 and 1/3 innings of three-run ball, a spectacular outing that surely would have looked even better had Craig Counsell not deviated from his strategy of avoiding the third time through the order.

Woodruff debuted in the big leagues last season and didn’t exactly light the world on fire, posting a 4.81 ERA and an ugly 123 DRA- across eight starts and 43.0 innings. He was ranked as Milwaukee’s #7 prospect to begin the year by Baseball Prospectus, and the knock against him was that “the stuff doesn’t jump off the page—or scouting sheet—and he may lack a consistent swing-and-miss offering in the majors…and the command profile is only average. Woodruff might be better served airing it out in short bursts.” Perhaps those evaluators were on to something.

Woodruff did begin the year in the starting rotation, but ended up as one of the club’s many rotating, optionable arms on the shuttle between Colorado Springs and Milwaukee. He finally started to come into his own during the final month of the season, when he was brought back to the big leagues and plugged into a multi-inning role within Milwaukee’s vaunted “run prevention system.” He ended the regular season with an improved 3.61 ERA while tossing 42.3 innings, though this time his work came across 19 appearances (four starts). He struck out 47 batters for the highest strike outs per nine innings (10.0 K/9) he has ever posted in the majors or minors. A sparkling Deserved Run Average valued his overall production as 30 percent better than that of a league-average pitcher. Woodruff has now made three postseason appearances, logging 10. and 1/3 innings with a 2.61 ERA and 15 strikeouts against two walks.

Perhaps predictably, it seems that a move to the bullpen has allowed Woodruff’s stuff to play up a few ticks. He saw a significant improvement on his fastball velocity, per Brooks Baseball, jumping from an already-hard 94.81 MPH in 2017 all the way to 95.96 MPH during the 2018 regular season and playoffs. He’s added about 40 RPM of spin to his four-seamer and another inch of armside movement, as well, and has joined the growing group of hurlers that focus predominantly on working the pitch up in the strike zone, generally keeping it inside on right-handers. 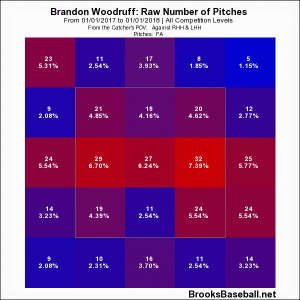 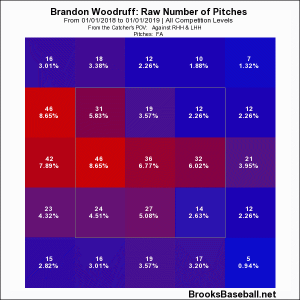 Woodruff’s fastball improved from -1.2 runs in 2017 (according to linear weights from Pitch Info) to +4.5 runs in 2018. Batters have hit only .207 against it this season, a vast improvement over the .302 average the posted in 2017. The righty boosted his whiff rate with the offering by a couple of points and uses the four-seamer as his go-to pitch with two strikes, especially to left-handers; 37 of Woodruff’s 60 punchouts between the regular season and playoffs have come on his fastball.

But it isn’t just Woodruff’s heater that has improved. He’s added a mile-per-hour to his slider and changed the shape of it, turning into more of a 3-t0-9 pitch (reading numbers on a clock) rather than the 2-to-8 movement he was getting on it in 2017. Batters are now whiffing at the pitch more than 14 percent of the time, where it was below 10 percent in 2017. The movement and velocity on Woodruff’s chanegup are similar to 2017, but the results are not; opposing hitters whiff on the pitch nearly 16 percent of the time and have batted .273 with a .000 SLG against it, whereas those numbers were 9.89 percent and .316 (.632 SLG) in 2017. After punching out a measly 6.7 batters per nine with an 8.4 percent swinging strike rate in his previous campaign, Woodruff is striking out batters like never before while generating swinging strikes at a robust 10.4 percent clip.

In addition to his pitches having a little bit more zest, Woodruff has also worked to address his other perceived shortcoming: he’s throwing more strikes. The righty’s walk rates have been similar across the last two seasons (2.93 BB/9 vs. 2.98 BB/9), but his zone rate has improved from 48.6 percent up to 51.1 percent. Called Strike Probability is a metric that attempts to quantify how skilled a player is at working in and around the strike zone; it is meant as a measure of control, and Woodruff’s Called Strike Probability jumped from 0.46 in 2017 all the way up to 0.50 in 2018. In terms of control, Woodruff ranked among the top 20 percent of MLB pitchers (minimum 42 innings, for a total of 382 pitchers).

The Milwaukee Brewers will undoubtedly continue to blur the lines between “starter” and “reliever” with their 27-outs approach going forward, and that could benefit Brandon Woodruff over the long term. Without the pressure of having to work deep into a ballgame, Woodruff has been able to “let it eat” over shorter, multi-inning stints, which has led to improved stuff and results across the board. It seemed at times like Woodruff’s future with Milwaukee was up in the air while he was yo-yo’d around during the regular season, but it now appears that he will be an integral part in the pitching plans for David Stearns and Craig Counsell in the years to come.