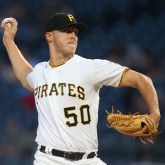 With the Brewers embracing a systematic rebuild following the 2014 and 2015 collapse, it is worth scrutinizing other building cycles around the MLB. As the Brewers play in Pittsburgh, the Pirates are winding down their second disappointing season following their 2013-2015 contending run. Pittsburgh fully rebuilt their baseball operations, analytics, and player development system under […]