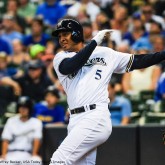 The Brewers front office has a difficult decision to make regarding second baseman Jonathan Schoop. The powerful right-handed bat was the subject of what may be GM David Stearns’s most controversial trade yet, as the GM swapped MLB roster asset Jonathan Villar, RHP Luis Ortiz, and (at the time) rookie ball flyer SS Jean Carmona […]

Over the weekend, the slow offseason was punctured by a rumor that the Brewers submitted an offer to Yu Darvish. Various rumors around Brewersland suggest that the offer was serious, although as always these anonymous rumors require at least a grain of salt. Signing a player like Darvish immediately accomplishes several goals for the Brewers: […] 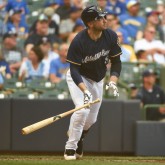 When Ryan Braun signed his contract extension in April 2011, it was prohibitively large. Braun, after all, had already signed a seven-year contract in 2008, so this deal wasn’t even going to kick in until after the 2015 season. And even though Braun was only entering his age-27 season, he was certainly no sure bet […]