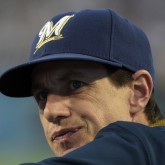 The Brewers released their Game Notes for Game Four tonight, in Los Angeles, meaning that there is relative certainty regarding the next two games of the series. Both games will be southpaw match-ups, with Waiver Trade acquisition Gio Gonzalez facing off against former Independent Leaguer and Curveball Artist Rich Hill before corresponding aces work on […]