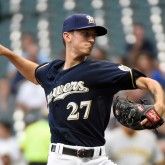 Among the many young faces on the Brewers, Chase Anderson is something of a veteran. At age 28, he has 267.0 major-league innings under his belt, meaning he should be able to impart some wisdom on his rotational cohorts. One of them, Zach Davies, shares some traits with Anderson — they both came to Milwaukee in […]