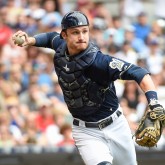 The date was November 13, 2014. Clayton Kershaw was named the National League’s most valuable player. In second place was Giancarlo Stanton, followed by Andrew McCutchen, and in fourth was Jonathan Lucroy. The 2014 season proved to be a “breakout year” for Lucroy. It was his first time on the MVP ballot. He finished with […]