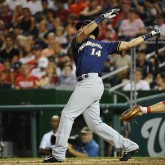 When Hernan Perez began his 2015 campaign with the Detroit Tigers, he was thoroughly established as a utility option. The right-handed batting infielder was already playing in his fourth MLB season, although he was quite inexperienced: to that point, 71 plate appearances in 34 games during the 2013 season represented Perez’s largest set of playing […]