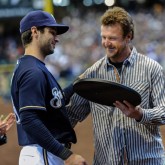 On November 22, 2011, Major League Baseball named Ryan Braun the National League’s Most Valuable Player. Braun became the fourth player to win the award in Brewers history and the first since Robin Yount earned it, back in 1989. In 2011, the Brewers’ right fielder finished with 20 of the 32 first-place votes, which accumulated him a total […]