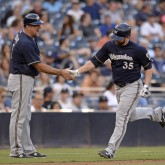 Last week’s trade of Khris Davis to Oakland has sent a ripple effect through Milwaukee’s 2016 outfield depth chart, affecting everybody and every position. Davis was projected to serve as the team’s everyday leftfielder. One of the possible solutions is reportedly for Ryan Braun, who was moved from left field to right two years ago, […]

Center field is a problem area for the Brewers. They don’t currently have a great option on the roster, as Domingo Santana best fits in right field despite getting the majority of the playing time in center down the stretch. They do, though, have minor-league options who are likely to be ready at some point […] 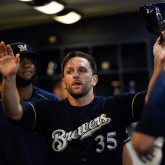 The Brewers have had stability in center field since Carlos Gomez took over full time duties in 2012. He’s now in Houston. The top center-field prospects (Brett Phillips, Tyrone Taylor, Michael Reed) won’t be ready for regular playing time until mid/late-2016 at the earliest and possibly not until the beginning of the 2017 season. Thus, for right […] 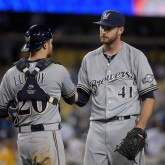 TOP PLAY (WPA) Sandbagged by a slow start and extended time lost to injury, Jonathan Lucroy has struggled through something of a lost year to this point in 2015. A six-win player last season, Lucroy has been marginally better than replacement-level this year, though his pre-injury performance played a big role in that. Still, manager […]