Now that the trade deadline is heating up, baseball’s best fan past time is pricing out trades and dreaming up returns for their favorite clubs. Analysts and writers have a tougher line to follow. First and foremost, not only do clubs hide their proprietary player evaluation and analytics systems, they also hide their risk assessment […] 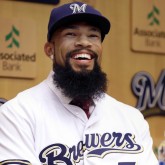 The Brewers are currently lead by a group of surprisingly valuable players, which is undeniably one of the reasons that the club remains steadily better than average. Entering Sunday’s game against the Dodgers, the Brewers’ top WARP belonged to: Eric Thames, nearly a handful of years removed from the MLB, previously a Korean Baseball Organization […]