On Monday’s game versus the Phillies, the Brewers found themselves in an all-too-familiar situation. Their starter, Jimmy Nelson, wasn’t pitching well, giving up a pair of runs in the first and second innings, which put the Brewers in an early 4-1 deficit. Nelson settled down, but he only managed to go five innings. The Brewers bullpen had to come to the rescue once again.

This year, the Brewers bullpen has experienced a high workload du to the ineffective starting rotation. They sit among the top portion of the majors in innings pitched by relief pitchers. 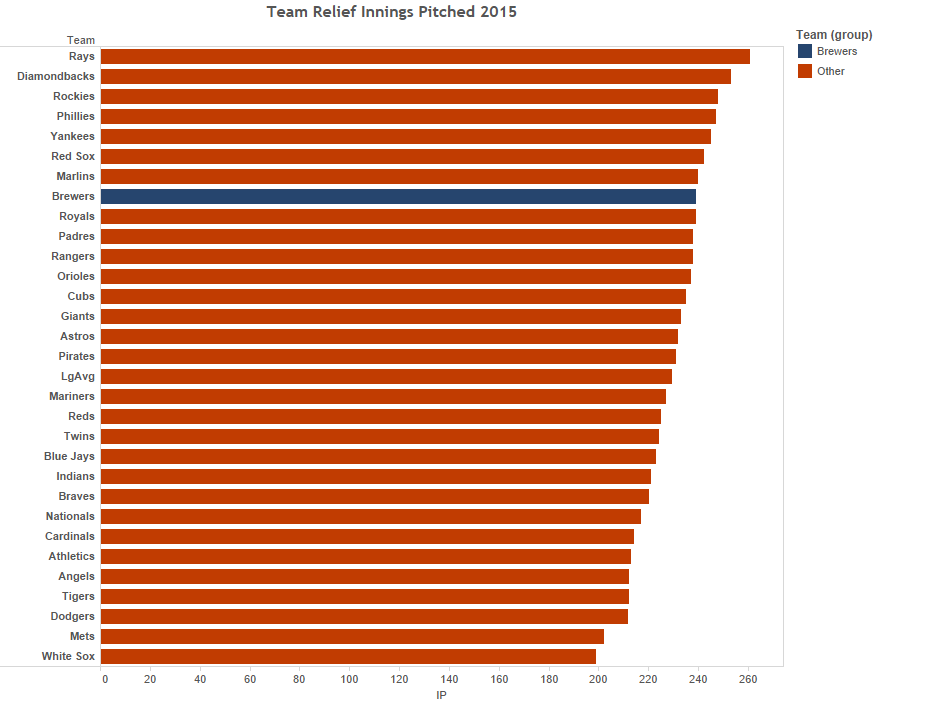 The Brewers rank eighth in Major League Baseball in innings pitched by the bullpen. The Rays are on top, but their bullpen usage seems to be part of a team strategy. So far this year, they’ve used a total of 21 pitchers in the bullpen. Milwaukee has only used 12. The Rays’ deep pitching staff has allowed them to shuffle guys between the majors and Triple-A in order to make sure all their pitchers are well-rested. This is why they’re at the top, but at least they seem to have a coherent strategy — to keep their starters from facing the batting order for a third time, to limit the innings of individual relievers, and to employ many relievers.

On a further note, while the Rays do lead the league in innings pitched by the bullpen, their relief pitcher with the highest is Kevin Jepsen who ranks 44th in innings pitched. Michael Blazek, on the other hand, has thrown the fourth-most innings in the league with 40. So, while the Rays’ bullpen has pitched more raw innings than the Brewers’ bullpen, they’ve done a better job spreading them out. Even a team like the Yankees, who is heavily dependent on Dellin Betances (eighth-most innings pitched, 38.1), has used 20 relief pitchers — considerably more than the Brewers.

Now, let’s acknowledge that even though the bullpen has pitched many innings this year, it has been one of the few bright spots in a desperately bleak season. 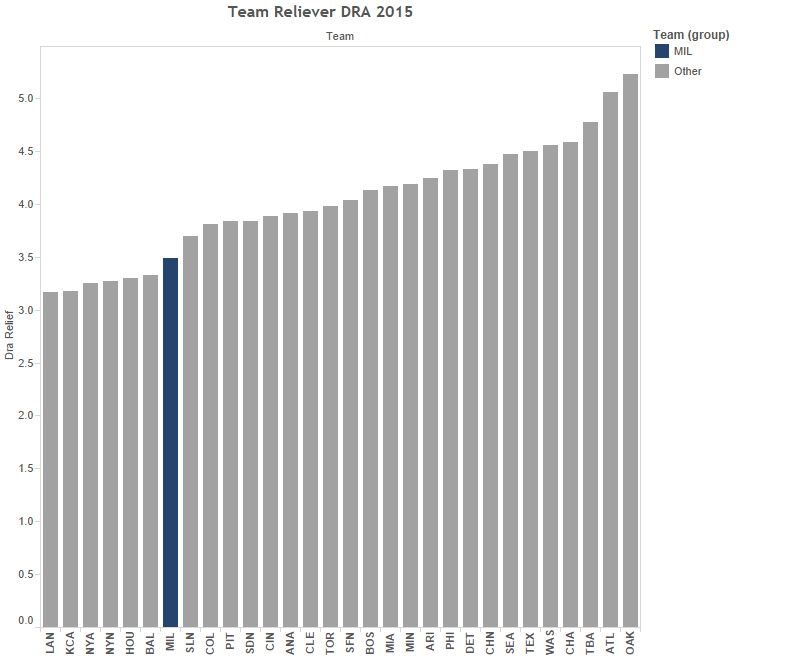 As one can see, the advanced metrics here at Baseball Prospectus like the Brewers bullpen. They have a 3.49 DRA (Deserved Run Average), which is good for 7th in the league. This effective Brewers bullpen can be attributed to a number of factors, but maybe none more important than the emergence of Michael Blazek and Will Smith. Both own sparkling DRAs under one. Francisco Rodriguez has also been killer in the closers role this year with a 1.49 DRA.

Since we’ve established that the Brewers bullpen has been good this year, let’s look at other measures to define bullpen usage. While innings pitched is definitely one way of looking at a bullpen’s usage, other ways exist. For example, we could look at the number of times relievers tossed multiple innings. In today’s game, most relievers typically don’t work more than one inning. Relief outings tend to be in higher leverage situations, so asking them to go more than one inning can be rather taxing on the arm. 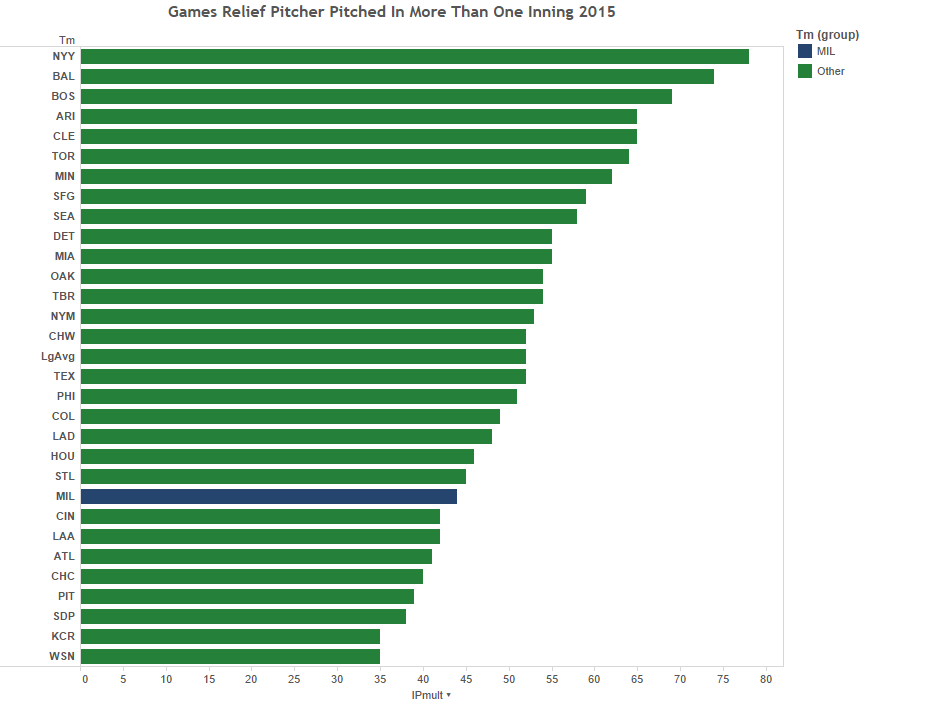 The Brewers have been good in this area. They rarely allow their relievers to pitch multiple innings. Perhaps the credit for this goes to manager Craig Counsell or pitching coach Rick Kranitz. They are the ones ultimately in charge of managing bullpen usage. That being said, while the Brewers pitchers don’t often pitch more than one inning, Michael Blazek has done so 10 times, leading the Brewers (24th overall). This could suggest that Blazek is comfortable going multiple innings — as he has been stretched out as a starter — or it could mean that he is being overworked. This has been his breakout season, but he’s never pitched 40 innings in the majors before. It will be interesting to see if he wears down later in the season. His history as a starter leaves us hopeful, though. 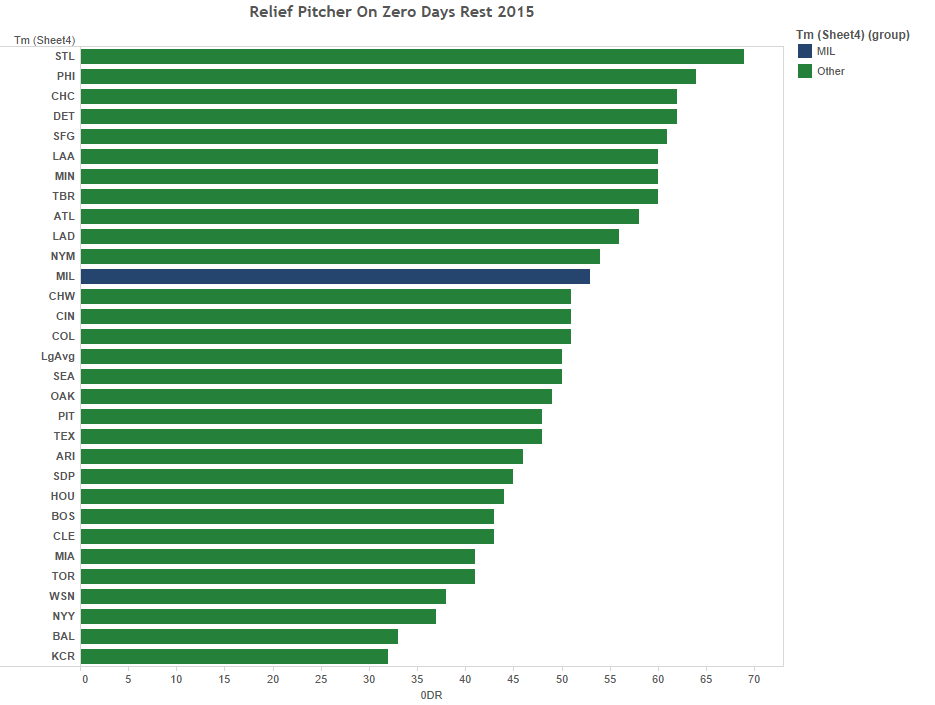 In this category, the Brewers are in the middle of the pack. They rank 12th in the league, right around league-average. The Cardinals are well in front in this department. Two of their pitchers, Seth Maness and Randy Choate, lead the league in appearances on zero days’ rest. Of course, Randy Choate is only a lefty specialist. He often enters to face a single batter, which means he’s probably better rested than your typical middle reliever.

Managing the bullpen is crucial. While the Cardinals lead the league in relief pitchers who throw on zero days’ rest, one of the primary reasons why is Randy Choate. The lefty can likely better handle this workload because he doesn’t face many batters, which keeps his pitch count down. It wouldn’t be the same thing if Counsell continually used Michael Blazek on zero days’ rest. That would clearly be poor managing and overtax Blazek.

Overall, Blazek and the rest of the Brewers bullpen have been a bright spot in a very underwhelming start to the season. While this may currently be true, the Brewers must monitor the way they use their bullpen in the future, if they want to keep being successful. They’re either going to have to start using their farm system more, maybe bring up a few relievers for more spot relief appearances, or hope that the starting pitching finds a way to produce better results. Relievers are not only important in keeping this team somewhat respectable, but they could also become valuable chips when the trade deadline roles around. If the Brewers are able to keep their relievers healthy and effective until the trading deadline, they could bring back a tidy little haul.