The discussion surrounding the rise in contract salaries has been a common theme around the baseball-verse. It seems that every season, a new superstar player gets signed to another record contract, raising concerns that players are being overpaid. The idea, though, that players are actually getting overpaid is complicated. As Matt Swartz pointed out, while salaries are definitely increasing, since 2002 revenues are increasing at a much faster rate, and baseball players are now actually getting a smaller share of the pie than they did before.

What percentage of revenue players deserve to be getting paid is an interesting topic; however, it’s not the topic this article will investigate. Instead, I want to look at the overall growth in salaries and how it relates to the Milwaukee Brewers. The club, as most of you already know, is a small-market team, and don’t have many bloated contracts on the books. Carlos Gomez, who can be considered a superstar, is “only” making $8 million this year and scheduled to make $9 million next year (and was still on the Brewers when researching this piece). While this sum of money may be a lot for the everyday person, it’s very cheap for a baseball player of Gomez’ caliber. The only big contract that can be attributed to the Brewers is that of Ryan Braun. He initially signed an eight-year, $45 million-dollar contract, which is due to expire at the end of this year. In 2011, though, the Brewers extended Braun’s contract through 2020. That portion of the contract will kick in at the end of this season and is a five-year, $105 million dollar contract. Braun will make $20 million for the next three years, $19 million in 2019, and $17 million in 2020.

This should be considered a massive contract, but when one compares it to the Albert Pujols, Prince Fielder, or Alex Rodriguez contracts, it seems pretty reasonable — especially considering Braun’s production. It’s also the only big contract for which the Brewers are on the hook. This isn’t necessarily surprising or a negative thing, as small-market teams don’t regularly dish out huge contracts. But is this just a perception? Are the Brewers among the lowest teams in terms of salary expenses? And how have their salaries grown compared to the rest of the league? While big-market teams have usually dominated the landscape with players’ salary, it does seem like the small-market teams are making a comeback and are signing more big-name free agents.

I found team-specific salary data in USA Today’s salary database. The data only went back to 1988, which provides a natural endpoint for this study. The team salaries are also from opening day. So, for example, the 2015 salary for the Brewers is their opening-day salary, not their current salary. 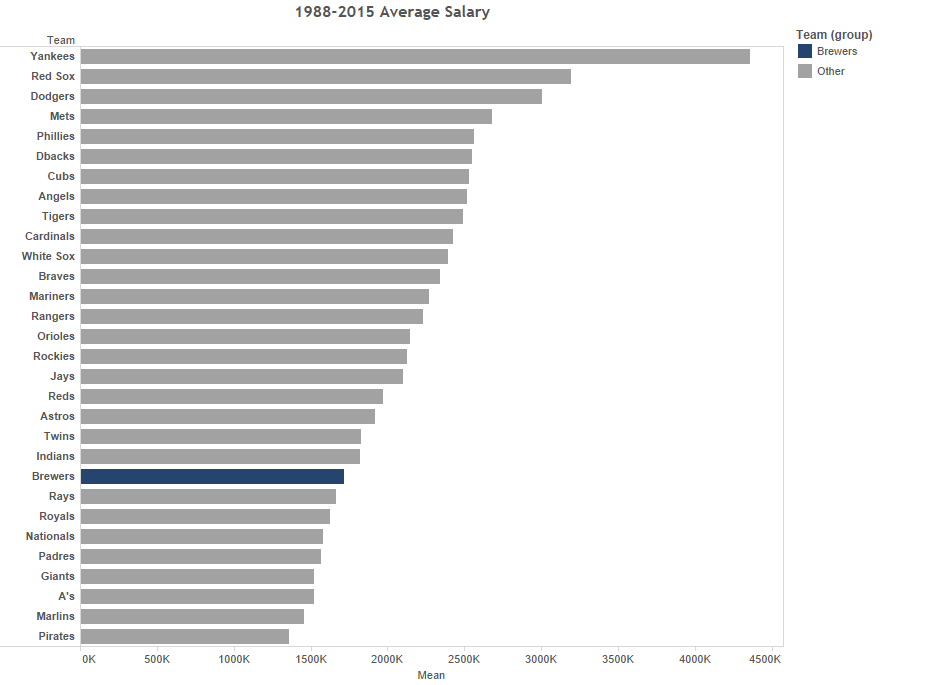 The perception that the Brewers haven’t spend a lot on players over the past three decades, at least as compared to the rest of the league, is correct. While the Brewers stay away from the bottom of the league, they’re still far below average. There also aren’t any big surprises here. The Yankees tower over everyone, followed by the Red Sox and Dodgers — teams that are all recognized as big-market franchises and teams who are willing to spend a lot. One might be surprised with the Nationals, but remember that they were the Expos before 2004 and were one of the most financially constrained teams during that time.

That being said, while the Brewers don’t spend a lot of money on player’s salary, let’s look at their year-to-year growth percentage over that span of time. 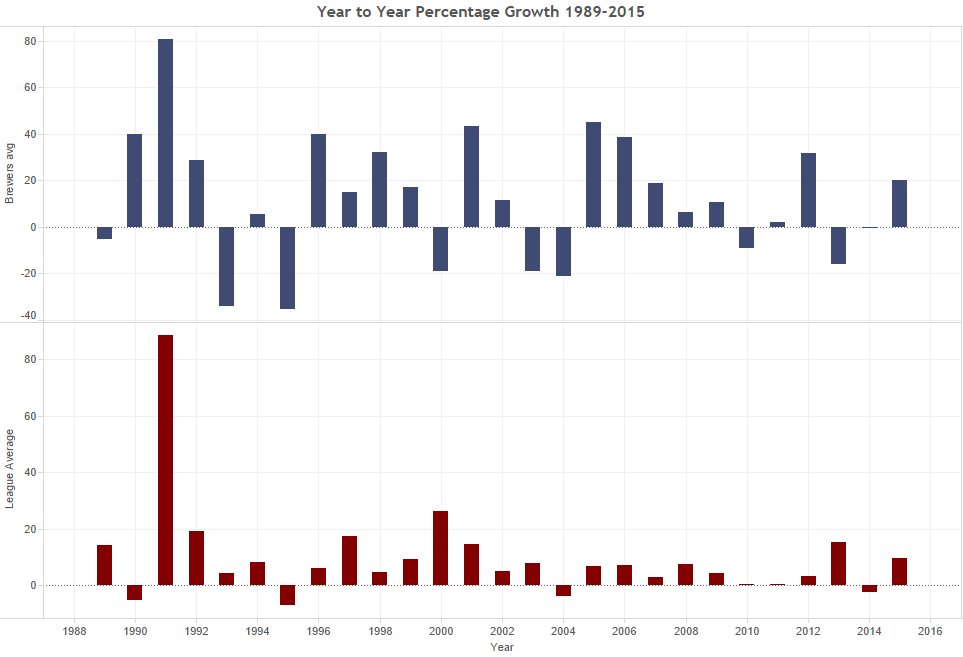 I included the league-average to provide some perspective. The year that jumps out the most is 1991. In 1990, there was a lockout, which started in February and lasted a total of 32 days, which basically wiped out all of spring training. Opening day was also moved back one week. The result of the lockout, though, was that the minimum major league salary was raised from $68,000 to $100,000. This is the primary reason why there was a huge average percentage growth in 1991. This was even the case for the Brewers; their highest growth percentage was also in 1991. Their next highest, interestingly enough was in 2005 — the year Mark Attanasio became the owner of the Brewers.

This can seem rather confusing, though, as it doesn’t give us a clear example of whether the Brewers had a positive or negative growth over that time – at least it’s hard to tell. So let’s examine their total average growth percentage from 1988 to 2014 and compare it to the rest of the league. 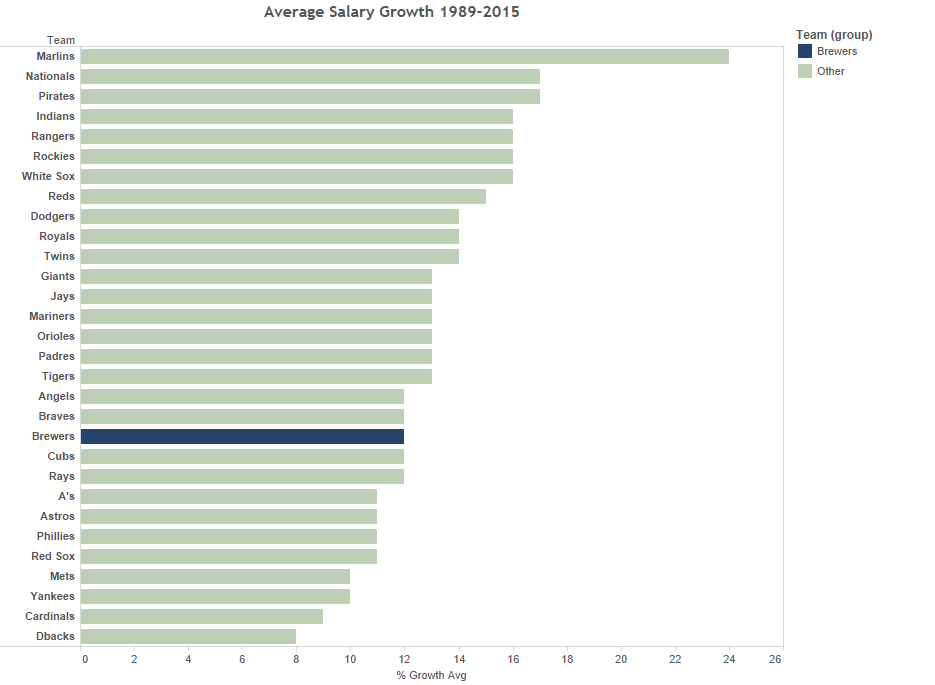 Since 1988, the average growth percentage of the Brewers is 12 percent. The Brewers, again, are a little below the middle of the pack. They rank 20th in Major League Baseball. What might be most interesting, though, is that as one can see the teams who’s average salary growth is expanding the most are the mid- to small-market teams, not necessarily the large-market teams like the Red Sox and Yankees, who actually are at the bottom of this list. Whether this trend will continue in the future, it’s unclear, but it will be interesting to track and determine if small-market teams can keep closing the gab on big market teams. The Dodgers seem to have other ideas, after all.

One might consider a 12 percent salary growth to not be a lot. Consider this: The 12 percent represents the yearly average of salary growth; thus, on average, every year the players salary grew about 12 percent. Perhaps a better way of illustrating how much average salaries have increased since 1988 is by the sum. Since 1988, the total growth percentage in player salary for the Brewers was 327 percent percent. Meaning that since 1988, the player’s salary of the Brewers grew by 327 percent. While that seems massive, that only ranks 18th out of the 30 major-league teams. The highest were the Marlins at 533 percent and the lowest were the Diamondbacks and Rays, who were expansion teams in 1997.

Finally, let’s conclude by looking at the Brewers trends. 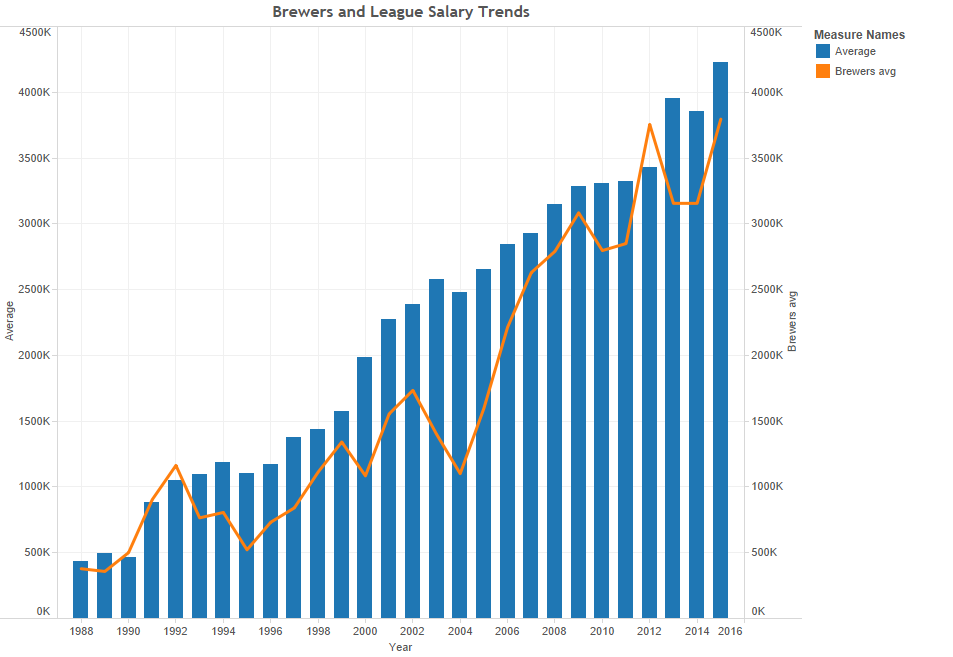 Since the year 2000, the only time the team was actually over the league average in terms of salary was in 2012. This may be surprising to some, considering that during the 2011 offseason, Prince Fielder left the Brewers for the Tigers, which removed his contract from the books. Fielder, though, was never very expensive while in Milwaukee. His largest contract with the Brewers was for $15 million. What primarily caused the huge spike in salary expenses were the acquisitions of Aramis Ramirez and Fransisco Rodriguez during the offseason. The Brewers also saw the contracts of Shawn Marcum and Rickie Weeks increase exponentially. In Weeks’s case his contract more than doubled, going from $4.5 million to $11 million.

The Brewers also enjoyed one of their best seasons in franchise history in 2011. They made it all the way to the NLCS, which created a lot of revenue. This probably allowed the Brewers to spend more on player’s salary during the following offseason than they normally would have spent.

But as we’ve conclusively seen, the Brewers aren’t a big-market team, even with Mark Attanasio at the helm. They don’t spend like a big-market team and probably never will. If anything, this just shows that even though the Brewers’ average salary is growing, it’s still nowhere near the big spenders. The Brewers must make smart moves in the draft room and in the trade market to be able to compete with teams who can spend far more money than they do.