A number of organizations are often characterized as being aggressive or conservative when it comes to promoting prospects to the majors. The Rays, for example, are famous for being cautious with calling up their prospects. On the other hand, a team such as the Marlins are known for quickly scooting their prospects through the minors and to the big leagues.

For the most part, this way that teams promote prospects in the minors and to the majors has not been quantified. That is until former Baseball Prospectus Editor in Chief Ben Lindbergh took a stab at it in 2011. Lindbergh looked at data from 2005 to 2009. He found that, on average, catchers tend to debut at a later age than any other position. He also found that the Twins are typically the most conservative team when promoting their hitters while the Rays are the most conservative team when promoting their pitchers. The New York Mets, on the other hand, were the team that was the most aggressive when promoting their prospects.

I also wanted to take a stab at quantifying this topic, seeing if I couldn’t update the study and go back a few more years to take a look at longer-term trends. Thanks to the wonderful Rob McQuown, I was able to look at data going back to 1984. 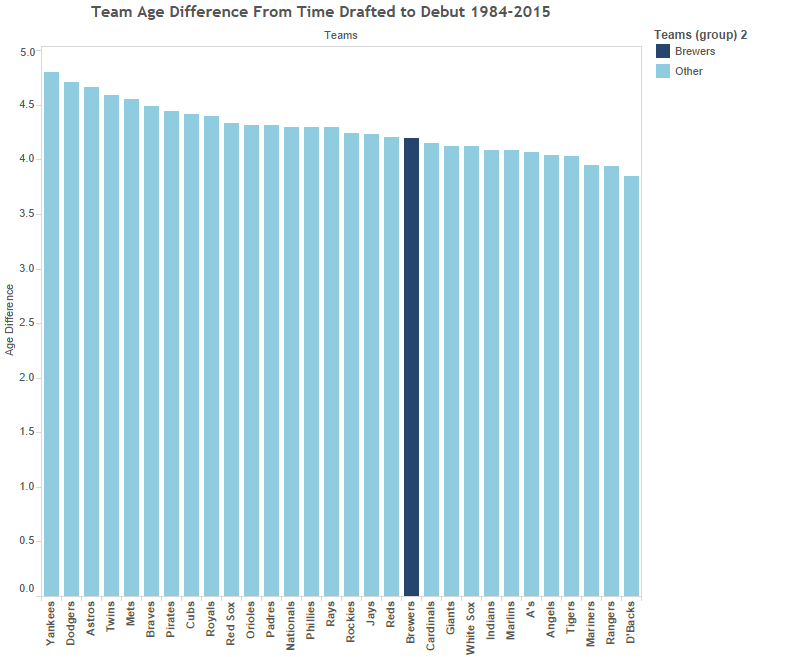 A different way of quantifying the notion coupled with different years will typically yield different results, of course. It would be foolish to think otherwise. In this way, we’re suggesting that current regimes are tied to the decisions of previous ones, which is dangerous. With that being said, though, looking at the age may not be the best way of looking at the information. It also doesn’t differentiate between pitchers and position players. After all, pitcher velocity does tend to peak early; therefore, it might be smarter to promote pitchers at a quicker pace in order to ensure that they don’t burn out in the minors. 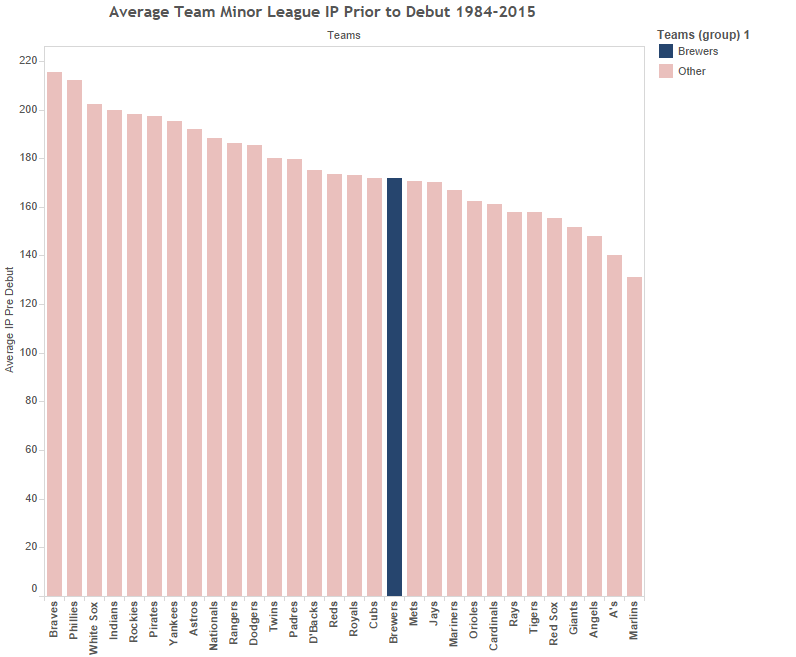 The Brewers are once again in the middle of the pack, ranking as the 18th-most conservative team with an average of 171 innings pitched before debut. The Braves pitchers, interestingly enough, averaged the most innings before they debuted. It’s no secret that they’re in a full-blown rebuild and have accumulated a number of pitchers. It will be intriguing to note whether they continue to adhere to this methodology and take a more prudent approach to promoting their pitchers, or if they will instead accelerate the process considering they are, in theory, trying to field a competitive team for 2017 — when their new stadium opens up.

The Cardinals are typically seen as a team that is more aggressive when promoting pitchers, which this evidence supports. On the other hand, they are typically associated with a more conservative approach when it comes to promoting position players. The idea is that position players need more time to develop and refine their skills, especially their plate discipline, in the minors. Considering the success of the Cardinals in churning out prospects, they might be the model to follow. But does the evidence support the perception? 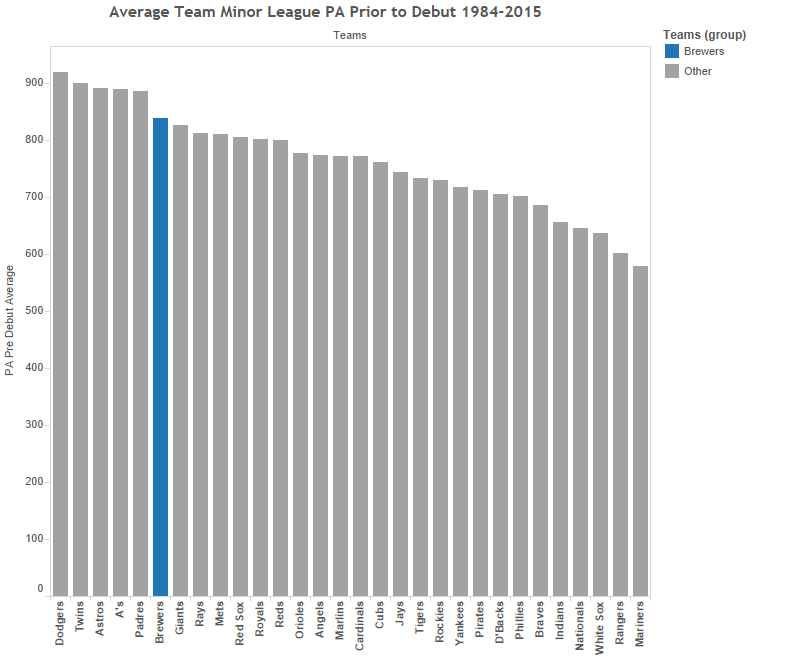 The Cardinals are definitely more conservative when promoting position-player prospects compared to pitching prospects. With that being said, they’re in the middle of the pack compared to the rest of the league. Teams also don’t necessarily promote pitchers earlier than position players. Since 1984, the average age of a prospect making his debut is 24 for both position players and pitchers.

The Brewers, on the other hand, are one of the more conservative teams when promoting position players, at least historically. This might give us more insight as to how they will handle Trent Clark and Gilbert Lara. A player such as Orlando Arcia is probably going to play in the big leagues at some point this season. Considering his production, the level at which he just played and his age, all signs seem to point for a 2016 debut. In fact, the BP Prospect staff had him at a 2016 ETA.

Clark and Lara are some ways away from the majors. Both players finished the season in short-season Helena. While they are both highly-touted prospects, Brewers fans might not see these players for a while, considering the Brewers track record with promoting their position players.

But 1984 is a while back. The Brewers are historically more conservative with position players than they are with pitchers. However, that might not be the case today, and the older regimes might very well be skewing the data. I, therefore, decided to see where the Brewers were trending. 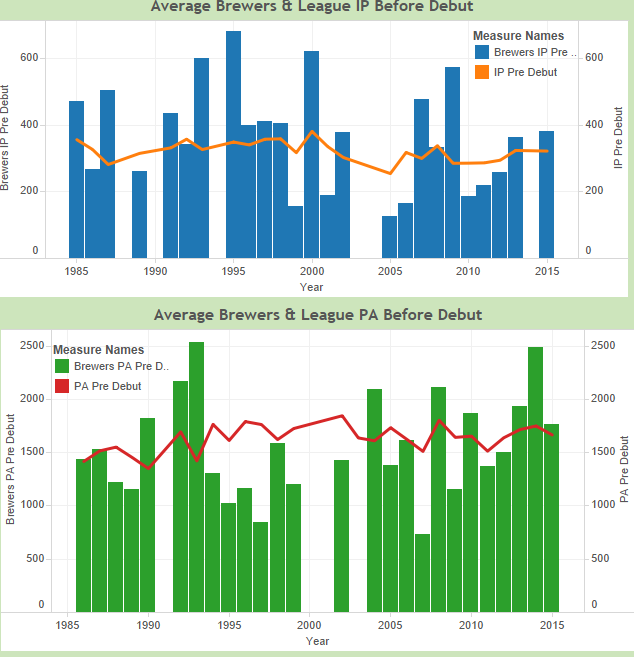 When it comes to the overall league trends, there doesn’t seem to be much of a shift in methodology. There is some year-to-year variance, but for the most part, the league as a whole hasn’t decided whether a more aggressive approach is better than a more conservative approach. The trends are generally consistent.

With the Brewers, there is a lot more variance, and that may solely be due to sample size. After all, some years only one player makes his big-league debut. Hell, in some years no players made their big-league debut. With that said, since 2007 the Brewers have been trending in the more conservative realm with their position-player promotions. Since 1984, while slightly, the Brewers are trending upwards in this department.

The pitching side is much of the same story for the major leagues. For the Brewers, there is even more variance in this data set. They are trending downward, or more aggressive, with their prospect promotions, but considering the level of variance, it’s hard to come up with a conclusion as to what will happen next year or in the years to come.

It’s also important to understand that there is some noise with this data. A player, for example, might be injured and, therefore, held back longer than he normally would. A player might be blocked in the majors, or there might be an injury to someone playing in the majors; therefore, a prospect is called upon sooner than anticipated. These sort of things aren’t uncommon either. Just look at last year. The Red Sox didn’t have any plans of promoting Blake Swihart early in the season, until they were forced by the injuries of Christian Vazquez and Ryan Hanigan. If this season, Jean Segura and Jonathan Villar get injured, the Brewers might be forced or compelled to promote Arcia sooner rather than later.

In his article, Lindbergh also found that there was a slight correlation between winning percentage and the number of call-ups. This means that as the Brewers lose more and more games, they will become more likely to promote prospects at a faster clip. As Lindbergh mentioned, teams who are worse off in the win column have more of an opportunity to promote prospects. While, if you’re a team like the Yankees and are looking to win every year, then you typically want your prospect to be able to make an impact when he enters the big leagues.

Teams like the Brewers will have more of a chance to allow their prospects to grow and fail at the big-league level. Therefore, while the evidence shows that the Brewers are a more conservative team when they promote their position players and middle of the pack for pitchers, I would expect them to be trending in the more aggressive section in the coming years as they continue their rebuilding process. They will have more and more open spots for young players to come up and make an impact.

Stearns has already set the wheel in motion for this, accumulating a number of players who are not likely to block any young prospect. With this new revamped Brewers look, the prospects will be able to come up and perform in the majors when they are ready with no-one blocking their path.

Thanks to Rob McQuown, Russell Carleton, and Ben Lindbergh for research assistance.