Last week, I looked at the greatness of the 2015 rookie hitter class and found that it proved to be historically good. Today, as you can imagine, I’m going to delve into the pitching side. There are always two sides to a coin, and even though the rookie hitters performed at an all-time-great level, it doesn’t mean the pitchers did as well.

Having a quality, young pitching rotation is one of the most valuable elements of baseball roster construction. The Mets serve as the current gold standard. For most of the season, their offense was subpar. At times, it could have been described as abysmal (that is until they caught fire, of course), and yet, they were able to make the playoffs and reach the World Series on the backs of their young pitching staff.

This isn’t to further emphasize the false notion of “Pitching Wins Championships,” but rather to accentuate the principle that being young and talented has a lot of value — especially when that young talent is in the starting rotation. Relievers seem to be all the rage this offseason, but lest we forget that starting pitchers are still one of the most valuable assets in all of baseball.

Well, perhaps the hitting class was simply so talented that it overshadowed the pitching class. With gifted players such as Bryant, Schwarber, Correa, Sano, and others, it’s hard to blame people for focusing so much on the position players. With that being said, there were still some terrific rookie pitchers in 2015. Just take a look at right-hander Noah Syndergaard, who burst onto the scene with his glowing blond hair and his overpowering fastball. Boston southpaw Eduardo Rodriguez experienced his struggles but was still one of the most effective pitchers in the Red Sox rotation. Lance McCullers also made a big jump from Double-A to the bigs and yet was sill able to baffle hitters for the Astros with his great curveball.

Whilst some rookie pitchers performed more than adequately, though, this class wasn’t without its dolts. Michael Lorenzen was allowed to pitch more than 100 innings this past year, and that proved to be more harm than good for the Reds as he finished with a -1.9 PWARP. Eddie Butler and Mike Foltynewicz, both top prospects in their own rights, struggled mightily in 2015, providing negative value to their teams.

Therefore, while this rookie pitching class had some positive performances, it was nowhere near as productive as the hitting class. Here is how it ranks proportionally as compared to the overall pitching PWARP. (Basically, the methodology is the same as last week’s: I looked at the percentage of PWARP rookie pitchers produced compared to the rest of the pitchers. I put a 50-inning pitch limit in order to include rookie relievers. The data, this time, goes back to 1969. The reason I didn’t go this far back for the hitting class was that there were a few inaccurate FRAA data points for the positional class in the years 1969 and 1970. 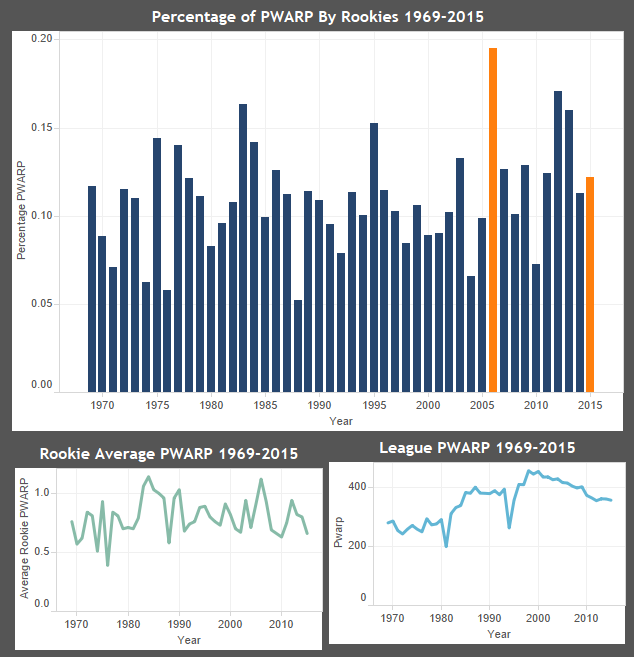 It’s pretty clear that, unlike the positional rookie class, this wasn’t the greatest pitching rookie class we’ve ever seen. However, that doesn’t mean it wasn’t a quality class.

The greatest year for rookie pitchers was, interestingly enough, not that long ago. It occurred in 2006. The year pitchers such as Justin Verlander, Cole Hamels, Jon Lester, Jarred Weaver, Matt Cain, and others made their big-league debuts.

For this, I also added the DRA- values. The methodology was, as usual, the same. The only difference was that I reversed the DRA- axis so that lower is higher. (The higher the dot is on the y-axis, the lower the DRA-.) 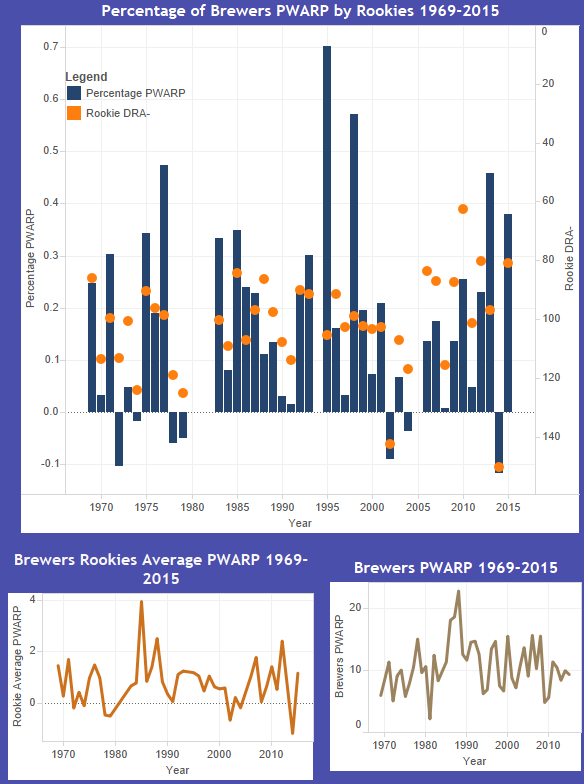 On average, Brewers rookie pitchers have made up 17 percent of the total PWARP. In 2015, rookie pitchers produced 38 percent of the total PWARP. It’s the fifth-best performance, on a proportional basis in Brewers history. And, impressively enough, this amount of production was produced by only three pitchers, Corey Knebel, Michael Blazek, and Taylor Jungmann.

Looking at the information through the DRA- lens, the 2015 class had the second best DRA- in Brewers history. While Knebel did provide some positive production, most of the impact was produced by Jungmann and Blazek. 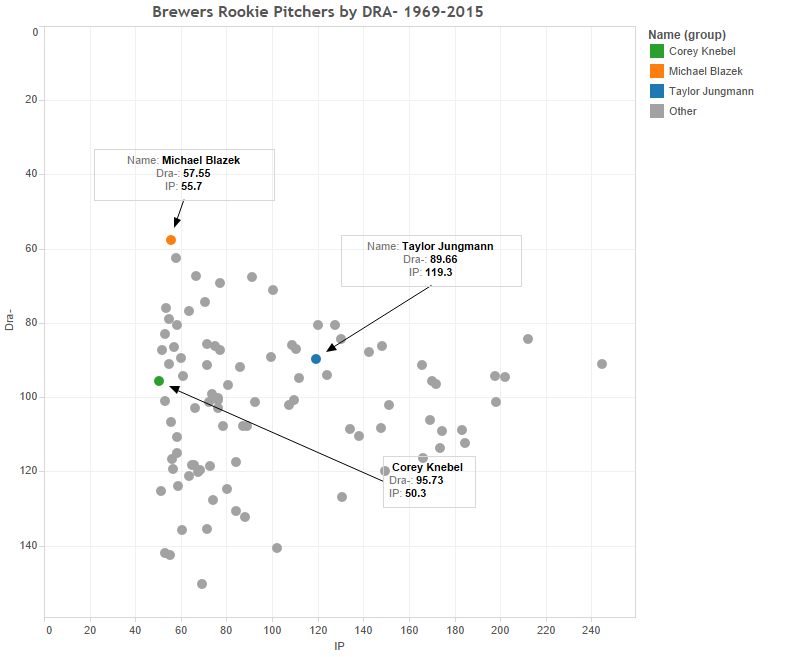 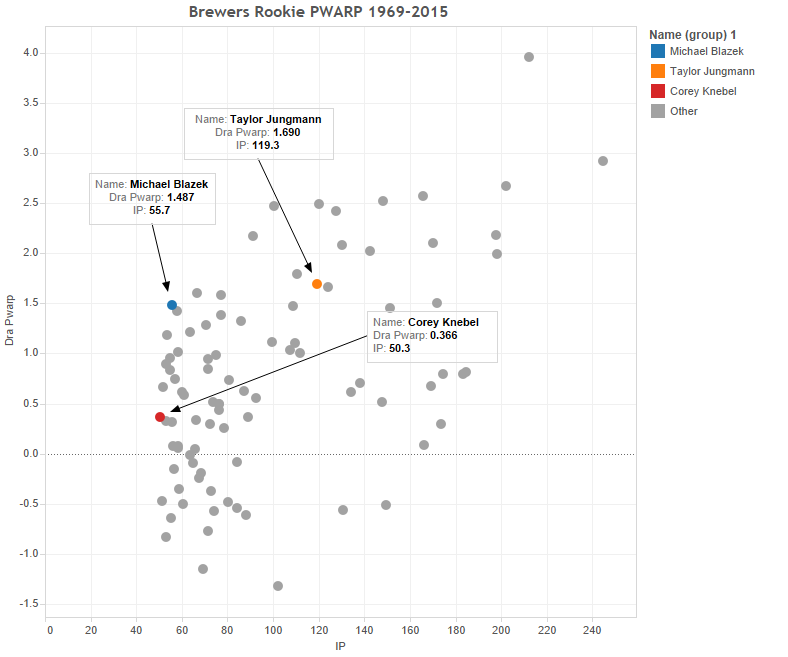 For rookies, Blazek had the lowest DRA- in Brewers history, with a minimum of 50 innings pitched. He was also able to accumulate a 1.4 PWARP in only 55 innings pitched. While Jugmann, who had a good rookie season in his own right, produced basically the same PWARP (1.6) with more than double the innings pitched (119).

The best performance by Brewers rookie pitchers was, perhaps, the 1995 season, where rookie pitchers combined for an outstanding 70 percent of the total PWARP. The Brewers didn’t have the best season finishing with a 65-79 record, which left them in fourth place in their division. Their Pythagorean win-loss record, however, suggested that they should have finished closer to a .500 record with a 71-73 record.

The average PWARP, on the other hand, does tell a different story. It shows that the 1985 season was actually the best in Brewers history. That year, however, Ted Higuera was the only pitcher to make his debut, and he lit up the competition, finishing with a 3.95 PWARP, which is the best mark in Brewers history.

The 2015 pitching class wasn’t the greatest of all-time. It wasn’t the second-greatest of all-time, nor did it make it in the top-ten for that matter. But it doesn’t mean one should look down on it with cynical eyes. The class was still better than most, and while it won’t go down in the pantheon of memorable rookie classes, it doesn’t mean we shouldn’t look back and appreciate the bright spots it provided — solid contributors that could linger and have a significant impact on the years to come.