It’s early and hard to tell what we’ll remember most from this season. It might be the Jose Bautista home run or the Josh Donaldson performance. Conversely, it might be the tremendous 2015 rookie class.

If you watched baseball this year, or even paid attention to it, you probably knew at some point that this rookie class was something special. The emergence of so many young and talented players captivated the mainstream baseball media numerous times. The first stud to reach the big leagues was probably Kris Bryant, who had his picturesque swing and awesome power. Then, there was Carlos Correa, who showed an unbelievable ability to thrive at the plate while playing a quality shortstop.

It’s highly probable that a rookie had an impact on the way that you watched the 2015 season. One probably got your heart pumping and caused your mind to wonder what heights the rookie will reach in his career. Yes, this was truly a great rookie class, but the natural question to ask is just how great?

Ben Lindbergh wrote about how many top prospects were making the majors. He even mentioned that “we should pause to savor the moment.” Hopefully, you heeded Lindbergh’s advice this past season. For Brewers fans, maybe it was with Taylor Jungmann or Michael Blazek; maybe it was Domingo Santana that intrigued you. Or maybe, it was a player on another team that demanded your attention. It seems logical to assume that not every year will have this sort of influx of rookie talent, and the 2015 class might even define the league for years to come.

A few weeks back, I looked at the performance of top prospects in baseball, looking at how their value during the year in which they were named on a BP Top-100 list. The evidence was pretty simple: the 2015 season was the year top prospects performed the best between 2007-2015.

I think this is a better way of looking at the situation, primarily because, while looking at this information on an overall basis might be nice, it could simply mean that the overall league is getting better as a whole. In other words, that there is more WARP. Mainly, this will allow us to see how much of the league wide contribution was thanks to rookies.

First, I looked at the position players, with a minimum of 100 plate appearances. I also included the overall rookie BWARP and the overall league BWARP, which the graphs can be found at the bottom of the visualization. 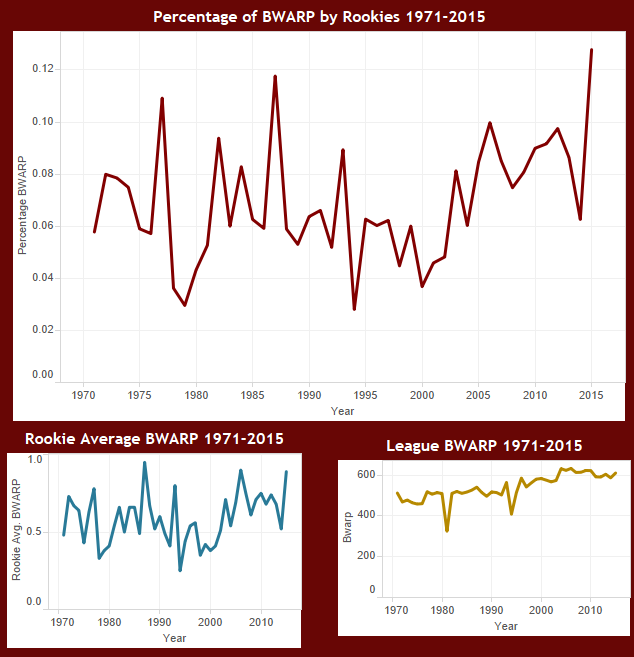 It’s pretty clear what the main graph is showing. On a proportional basis, the 2015 rookies made the greatest impact on the league. This past season, rookie hitters contributed to 13 percent of the total BWARP, which is better than any season since 1971. It also showed to be one of the biggest leaps in impact for rookies.

In 2014, all the rage seemed to center on the underperformance of rookies. Every day someone seemed to discuss the notion that it’s harder than ever to play in the majors and that the leap to the majors has never been more difficult. In fact, Alex Speier wrote a piece on this very notion. That, idea, however, was disproven to a certain extent by Ben Lindbergh. He said, “Although the trajectory is worth watching, we’re left without any proof that the leap from Triple-A to the majors is tougher than it has been at various points in the not-so-distant past.” Mainly, Lindbergh acknowledged that people felt this way due to recency effect or recency bias. It does seem to have gotten harder over the past few years to play in the majors, but if one looks at the more long-term effect, then the problem doesn’t appear to be more severe.

This winter no one seems to be talking about this issue. In fact, I haven’t been able to find a single article written on the subject. One of the biggest reasons people were worrying last season about rookie performances were due to the rookie trends in performance, but as can be seen above, that concern seems to have resolved itself in a pretty distinctive manner. In fact, the 2015 rookie class performance was 104 percent better than the previous year’s rookie class! That discrepancy in performance was the second highest since 1971. The only year that had a bigger leap in performance was from 1994 to 1995, which saw a 124 percentage change. The main reason for that was that 1994 was a shortened season due to the lockout, which gave fewer rookie’s a chance to make an impact in the majors.

The tale of the rookie is quite different for the Brewers. I’ve already discussed, to a certain extent (and I will discuss it further in the next post), their rookie pitching is where their strength lied.

For position players, it was quite an ugly scene. The concept was still the same, however, as I looked at the Brewers’ positional rookie performance in proportion to the overall Brewers positional players. Here are the numbers, in which I’ve added the average TAv — so we won’t simply be looking at the overall BWARP. (Keep in mind, that in general an average TAv is considered to be .260). 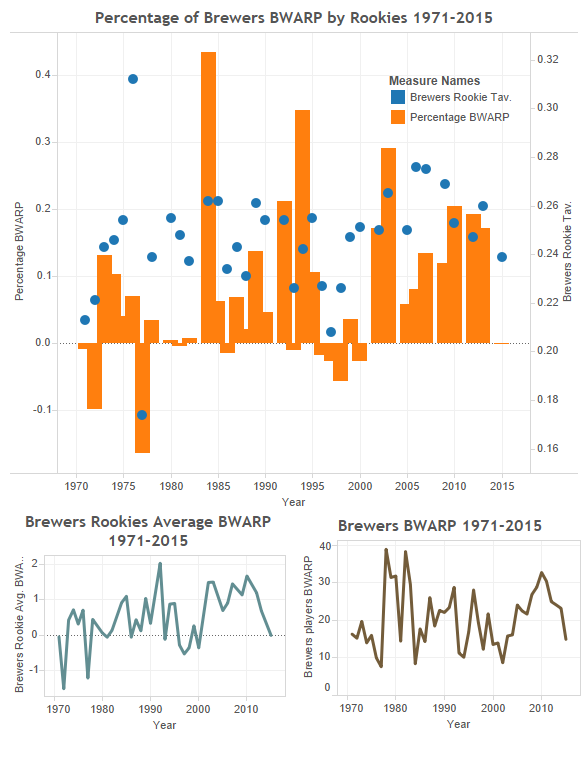 You might be wondering where is the 2015 value? Well, the Brewers rookie hitters only represented 0.0007 percent of the total Brewers BWARP. They also weren’t a very productive rookie class with the bat averaging a .239 TAv, which is well below average.

Hernan Perez was the main culprit hurting the production. He produced a -1.0 BWARP for the season. With that being said, the Brewers didn’t have any star prospects come up and make an impact in 2015. At least not for a long enough time. Domingo Santana might very well go on to be a very productive hitter throughout his career, but he simply didn’t get enough opportunities with the Brewers to make a significant impact. He was also hurt defensively when he was stuck defensively in center field, as he finished the season with a -4.7 FRAA, which served to counteract most of his offensive output. It’s very possible, however, that next season he flourishes in a corner spot if the Brewers can finally find a suitable trade partner for Khris Davis.

The best year, in proportion for the Brewers rookies, was 1984. That, however, was mainly because the team as a whole sucked. The team went 67 and 94 and finished last in the AL East. That season, the Brewers hitters only produced 8.44 BWARP, which is the second worst in Brewers history. (It can be seen in the “Brewers BWARP 1971-2015” graph.)

Therefore, the average BWARP in this situation will probably give one a better perspective. That graph shows the best season for Brewers rookies was in 1992, which saw the rookie performance of Pat Listach, who arguably had the greatest rookie performance in Brewers history finishing with a 5.3 BWARP.

We so often talk about greatness and what it means, how important and difficult it is to find. But we don’t always seem to notice it when it’s present, when it’s happening right in front of us. It’s often by underselling the excellence of Mike Trout, LeBron James, Peyton Manning, or whomever. We always try and cling to the notion that the past was better, that the past was somehow better than the present. But, for this hitting rookie class, maybe the past wasn’t better (if it was, it was barely better). At the end of the day this positional rookie class was one for the ages, and hopefully, it’s something will remember about the 2015 season.

Thanks to the great Rob McQuown for research assistance.

2 comments on “The Greatness of the 2015 Rookie Class: Part One”