Presumptive Brewers closer Will Smith will have to open the season on the disabled list with a torn lateral collateral ligament (LCL), according to breaking news reports out of Arizona.  Smith’s injury falls squarely into the “freak” category — the big left-hander was attempting to take off his shoe when he felt the knee pop.

Smith joins a long tradition of unfortunate and absurd injuries for the Milwaukee Brewers. Last April, Scooter Gennett was wounded by the showers at PNC Park, as he cut himself on a rack and needed five stitches between his index and middle fingers and was forced to the disabled list for 14 games. Two years ago in spring training, Milwaukee’s last closer, Francisco Rodriguez, stepped on a cactus and suffered a foot injury that threatened his Opening Day status. That April, Ryan Braun accidentally knocked Jean Segura in the head with a warmup swing in the dugout. The shortstop needed stitches for a gash on his face, resulting in four missed games.

In 2012, Jonathan Lucroy was sent to the disabled list for 50 games after a hotel room suitcase accident led to a broken hand for the catcher. In 2011, Chris Narveson sliced open his thumb while attempting to fix his glove, needed eight stitches, and missed two starts in August. In 2004, Wes Helms missed 34 games after slipping and falling during a rain delay and injuring his knee. Going all the way back to 1987, Dan Plesac suffered “strained muscles on both sides of his left elbow” after running into an outfield fence while shagging fly balls during batting practice and missed 10 days in late August.

The most comical came in 1994 from knuckleball pitcher Steve Sparks. After the Brewers brought in the absurd motivational group Radical Reality — “You’re either an image maker, or an image breaker” — that sends a powerful message about self-esteem by punching through bricks and bending frying pans. It’s hard to believe a team inspired by a performance like this was 53-62 and in last place when the players’ strike ended the 1994 season:

Sparks thought he could replicate one of Radical Reality’s trademark stunts, ripping a phonebook in half. When Sparks tried it himself, he dislocated his shoulder for the seventh time in his career.  Sparks, who had yet to reach the majors, was unable to recover and make the club out of spring training, but he was able to toss 183 innings at Triple-A and started a nine-year MLB career the next season in Milwaukee. 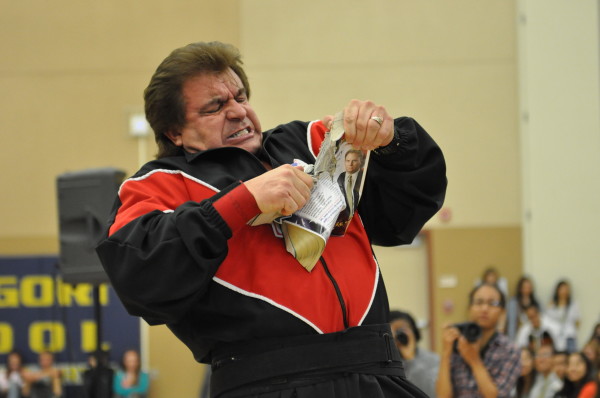 The timing couldn’t be worse for Smith, who was poised to enter the season as the Brewers co-closer with Jeremy Jeffress. The injury is not expected to be season ending, but manager Craig Counsell said it will cost Smith “significant time.” It’s unclear if Smith will require surgery, but if so, he will likely miss at least a few months.

Smith’s injury leaves opportunity for the rest of Milwaukee’s relievers. Jeremy Jeffress will get a chance to prove he can handle the closer’s role on his own and can handle the ninth inning against hitters from both sides of the plate. And Smith’s trip to the disabled list will open a spot for one of the many relievers fighting for a spot in the back of Milwaukee’s bullpen — the likes of Chris Capuano, Blaine Boyer, Sean Nolin, and Franklin Morales.

Given all this, it would be easy for Smith to be resentful. But what appears to be hitting him hardest about his injury is his disappointment over letting down his teammates. “I pulled hard [on the shoe] and it stayed on,” he told reporters.  “My knee just went up and popped. Everyone tells you there is nothing you can do about it, but you still feel like you are letting people down.” As much as this injury could hurt Smith’s career and future earning potential, his first thought was about his teammates, and that just makes this random, freak injury even tougher to witness.

Tags: Brewers freak injuries, new shoes, Will Smith injury |
Jack Moore
Follow @jh_moore
Jack Moore is a freelance sportswriter based in Minneapolis. His work can be seen regularly at VICE Sports, The Guardian, and The Hardball Times.
read more from Jack Moore

3 comments on “Will Smith and Brewers Freak Injuries”

Didn’t Matt Wise once slice his finger open on salad tongs and spend some time on the DL because of it?

You forgot about Matt Wise and the salad tongs!