Jeremy Jeffress was supposed to be a co-closer for Milwaukee, but Will Smith’s preseason injury threw a wrench into manager Craig Counsell’s best-laid plans. Instead of just being part of a bullpen by committee, Jeffress has been the club’s first option in the ninth inning. And while he is six-for-six at converting save opportunities, his more basic underlying numbers suggest that he has been very good but not great.

Jeffress’ 3.12 ERA is good and his 6:1 strikeout-to-walk ratio is very good, but they both come with the obvious caveat that he has only pitched 8.2 innings. So while it is great that he is striking out six times as many batters as he walks, that number isn’t indicative of exactly how he’s pitched.

Throughout his career, Jeffress has been a ground ball pitcher, and his 59 percent career ground ball rate establishes this. This covers both his successful and unsuccessful stints in Kansas City and Toronto, so we have an idea that this ground ball pattern will continue even if he struggles at some point in the year. However, successful closers are usually strikeout pitchers, and that is not just because of managerial bias. Ground ball pitchers like Jeffress are more dependent on good fortune, positioning, and BABIP luck than someone with more dominant strikeout stuff would be.

We wouldn’t worry so much about this if Jeffress were an established ground ball reliever like Brad Ziegler, but the Brewers’ new closer has a relatively short track record. His 68 big league innings in 2015 were by far the most of his career, and even then, most of his innings up to that point had come after rejoining the Brewers in April 2014. Relievers accumulate far fewer innings than starters, but even for a reliever, Jeffress doesn’t have a ton of experience.

It is for this reason that I am generally worried about Jeffress’ ground ball rate. His 56 percent ground ball rate in 2016 is lower than his numbers with Milwaukee in each of the past two seasons, and although it is not significantly lower, it combines with some more underlying issues to raise a concern. 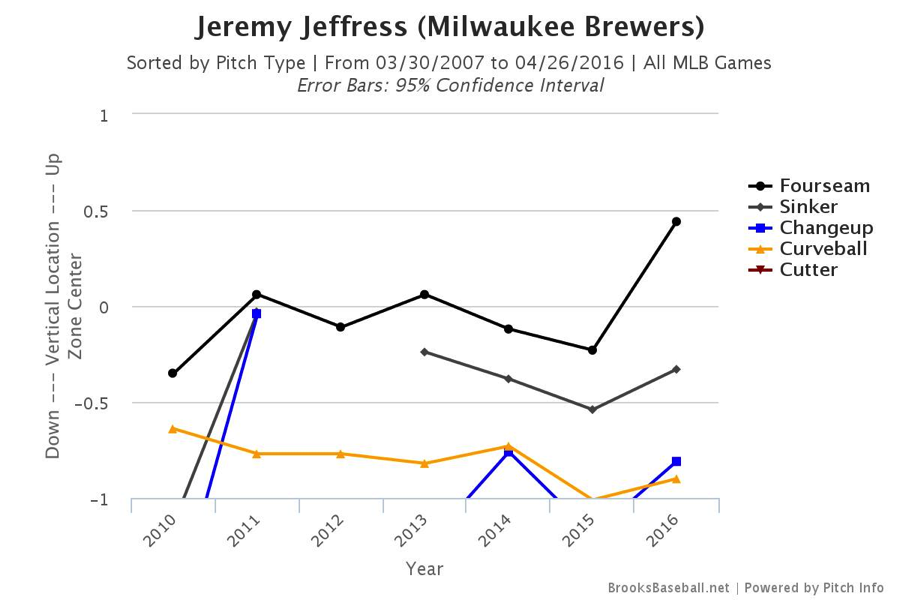 As you can see above, each of Jeffress’ pitches has been located higher in the zone than they were last year. This is worrying for someone who is trying to induce ground balls, although a silver lining is that his sinker—his most frequently-used pitch—remains right about at the same level it has been in the past few years.

However, this rise in vertical location is matching a corresponding narrowing of his pitches’ movement. 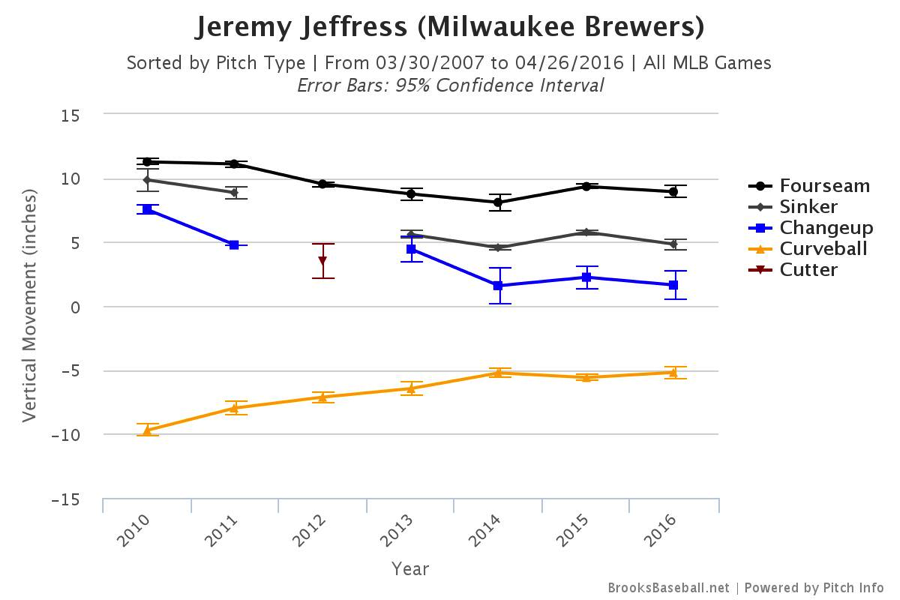 When Jeffress made his big league debut in 2010, there was a very wide spread between his pitches. In the years since, though, that gap has narrowed tremendously. In a vacuum, that does not have to be a bad sign—but it doesn’t look great given Jeffress’ particular skillset.

For someone who relies at least partially on deception and inducing weak contact—which Jeffress, as a ground ball pitcher, clearly does—it may not be the worst thing in the world to have your pitches begin to look more like each other. But it’s hard to put a positive spin on a sinker dropping less over the course of his career.

Overall, Jeremy Jeffress has had an encouraging start to 2016. However, there are some worrying signs. These are not hugely concerning—particularly given some of the small changes we’re looking at—but they are clearly a downward trend if they continue.