To engineer a successful Major League franchise takes talent, there is no doubt about that. But like any avenue of life, you don’t reach the top unless you mix that talent with a generous heaping of good fortune. Sometimes, you take a chance, and that chance pays off far beyond what you could have ever reasonably expected. Think Jake Arrieta, acquired by the Cubs for next to nothing. Or Jose Bautista, picked up by the Blue Jays in an afterthought of a waiver trade.

On October 7th last year, the Brewers took a chance that nobody really noticed, or expected to pay off in any way, when they claimed Junior Guerra off of waivers from the Chicago White Sox. He had put up nice numbers in AAA–but he did so as a 30-year-old, which is not typically as impressive as dominating AAA at a younger age. Guerra spent most of June in a White Sox uniform, but was only called upon to pitch three times before he was sent back down, presumably because his arm was going to go stale if it sat any longer.

To this point in the 2016 season, the Brewers have three pitchers who stand out above the rest of the staff on the statistical leaderboards. Jimmy Nelson and Tyler Thornburg are not too surprising to see there–but before the season, I don’t think a single person alive could have predicted that Guerra would be the third. Not even Guerra himself.

With just thirty Major League innings to his name, it’s certainly too early to anoint Guerra a big-league success–hell, Taylor Jungmann, the pitcher Guerra replaced in the rotation, was arguably better for longer last year before big-league hitters figured him out and possibly broke him for good. It’s easy enough to dismiss Guerra’s success due to the small sample size–and that only gets easier when you look at his age. By the time you learn that Guerra has a gap in his Major League resume spanning 2009 to 2014, and that before the White Sox picked up on him he was last pitching for San Marino of the Italian League, well, the possibility of this guy succeeding seems so remote as to not even consider it.

There’s a lonely, singular mention of Guerra in the BP Archives dated before the Brewers claimed him last October. Back in September of 2008, Kevin Goldstein wrote a preview of the Hawaiian Winter League–the final one ever, as the HWB League would fold for good following the conclusion of the season. Buster Posey gets a nod, then the best catching prospect in the game, and there’s discussion on whether or not current Brewer slugger Chris Carter ends up at first or third base in the long run. Tucked at the bottom of the list, the final player written up, is the fifth-best relief prospect to play in Hawaii that winter–Guerra. As Goldstein notes:

“He pitched at four levels during the season, allowing just 15 hits in 34 innings while striking out 41. Short and stocky, Guerra has plus velocity, a developing breaking ball, and good command, leaving some to see him as a bit of a sleeper.”

The last Hawaiian League ever wasn’t kind to Guerra, and he posted a 9.16 ERA in 16 2/3 innings. He would never throw another pitch for the Mets organization, as they released him outright the next June. For the next few years, Guerra was a baseball vagabond.

Originally from Venezuela, he played in the Winter League every year, hoping to get another professional chance. In 2011, he started 20 games for the Wichita Wingnuts of the independent American Association. In 2012 he surfaced in the Mexican League, making five starts for Leones de Yucatan. The next year, he was back in Wichita. In 2014, he played for T&A San Marino of the Italian League–whose stats don’t even register on Baseball Reference, and whose Wikipedia page last lists results from that 2014 season. Guerra’s professional career seemed to be heading in the wrong direction, further and further from the big leagues.

But before the 2015 season, the White Sox signed Guerra to a minor-league contract–a move that was hailed as “enigmatic,” when it was noticed at all. At Birmingham, and then Charlotte, Guerra struck out north of eleven batters per game working as both a starter and reliever. But other than those three appearances in June, the Sox had no need for him at the big-league level. But the Brewers noticed, and they grabbed him up in October as one of the first low-risk transactions of the David Stearns era. Despite a 4.63 ERA and 3.99 FIP, Guerra struck out almost nine hitters per game while walking fewer than four at Colorado Springs this April, and those peripherals were enough to earn him the promotion when the big club lost patience with Jungmann.

Guerra made his first Major League start on May 3rd against the Angels, going six innings and picking up the win, despite a rather pedestrian stat line–three strikeouts, four earned runs, seven hits allowed. It wasn’t the greatest debut in Brewers history–that would be Steve Woodard–but it was far better than anything Taylor Jungmann had worked up in April.:

Ten days later, after working six innings for a no-decision in Cincinnati, Guerra twirled his first real gem in the big leagues: he only struck out four, but threw six scoreless frames against the Padres, picking up his second win. Despite the low strikeout total, Guerra induced ground balls on nearly half of the batters he faced. He surrendered just two hits in his six innings of work:

But Guerra’s finest performance to date came on May 19th against the Chicago Cubs. Despite surrendering a leadoff home run to Dexter Fowler, Guerra pitched seven innings–his longest big-league outing yet, and struck out eleven Cub hitters to outduel Jason Hammel en route to his third win of the season.

During his time on the fringe of professional baseball, Guerra discovered a secret weapon that would make him a viable Major League pitcher–the split-finger fastball. And by the time the White Sox signed him, he had refined this pitch to the point where it was his second only to his fastball in usage.

So far, big-league hitters have been completely shut down by Guerra’s splitter. In 43 at-bats they’re hitting .116 and slugging .163. Hitters are whiffing on an unreal-seeming 42.5% of splitters he throws, and when they do manage to make contact they beat the ball into the ground over 56% of the time.

And to write those results off as a small sample size anomaly, or beginner’s luck, might be shortsighted and incorrect. Guerra’s splitter matches up favorably with the best renditions of the pitch from around baseball. Here are his game-by-game vertical movement readings–next to two of the most established splitter artists in the game, the Yankees’ Masahiro Tanaka and the Orioles’ Ubaldo Jimenez. 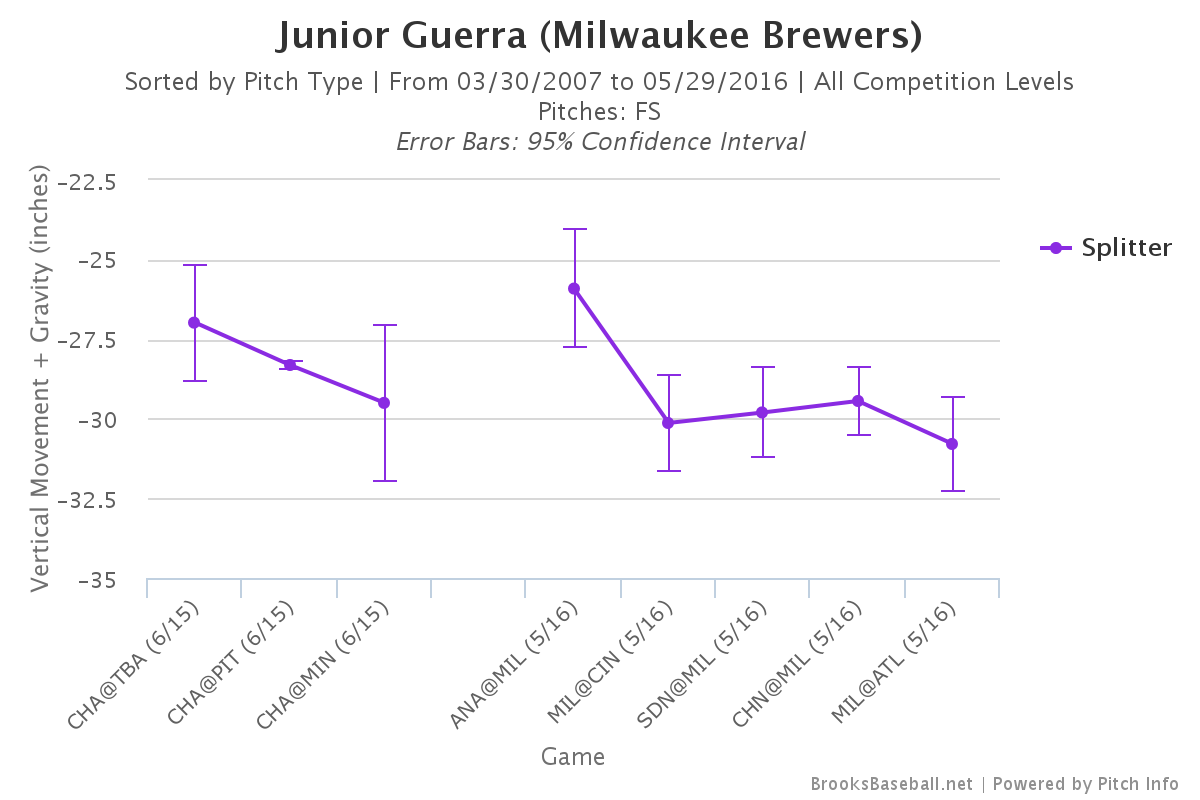 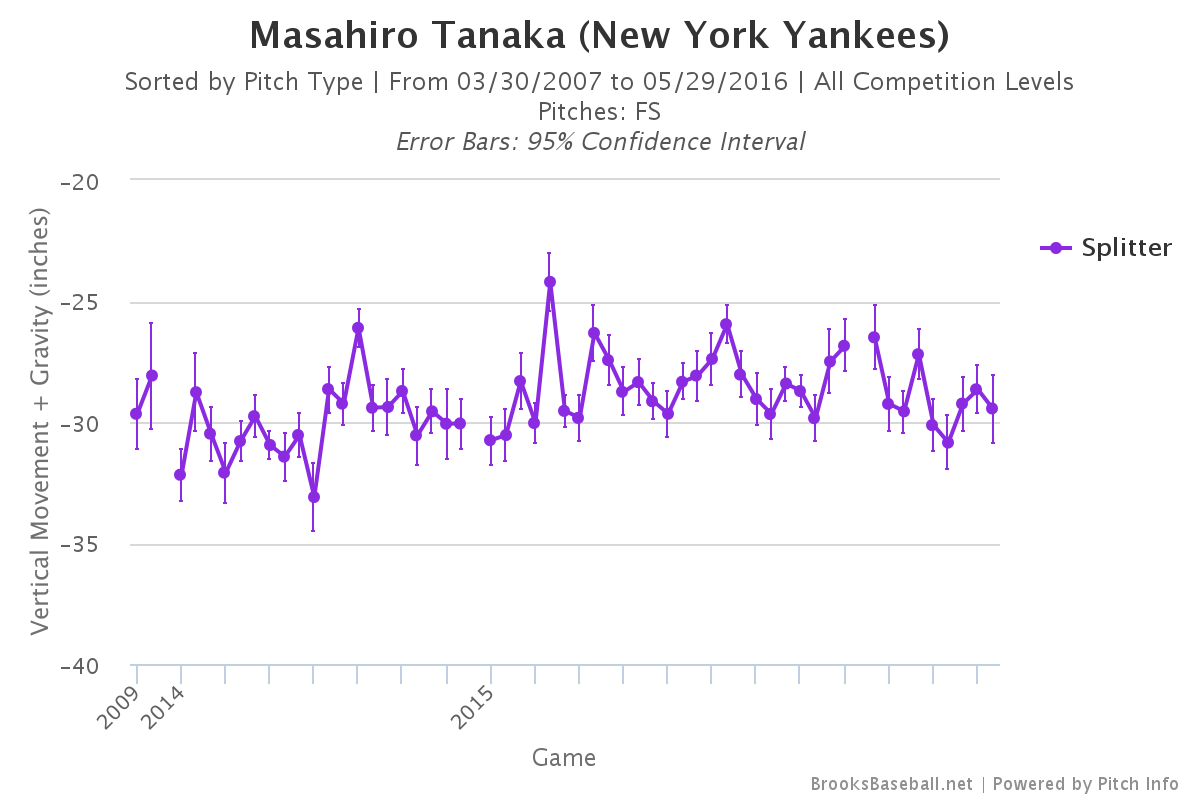 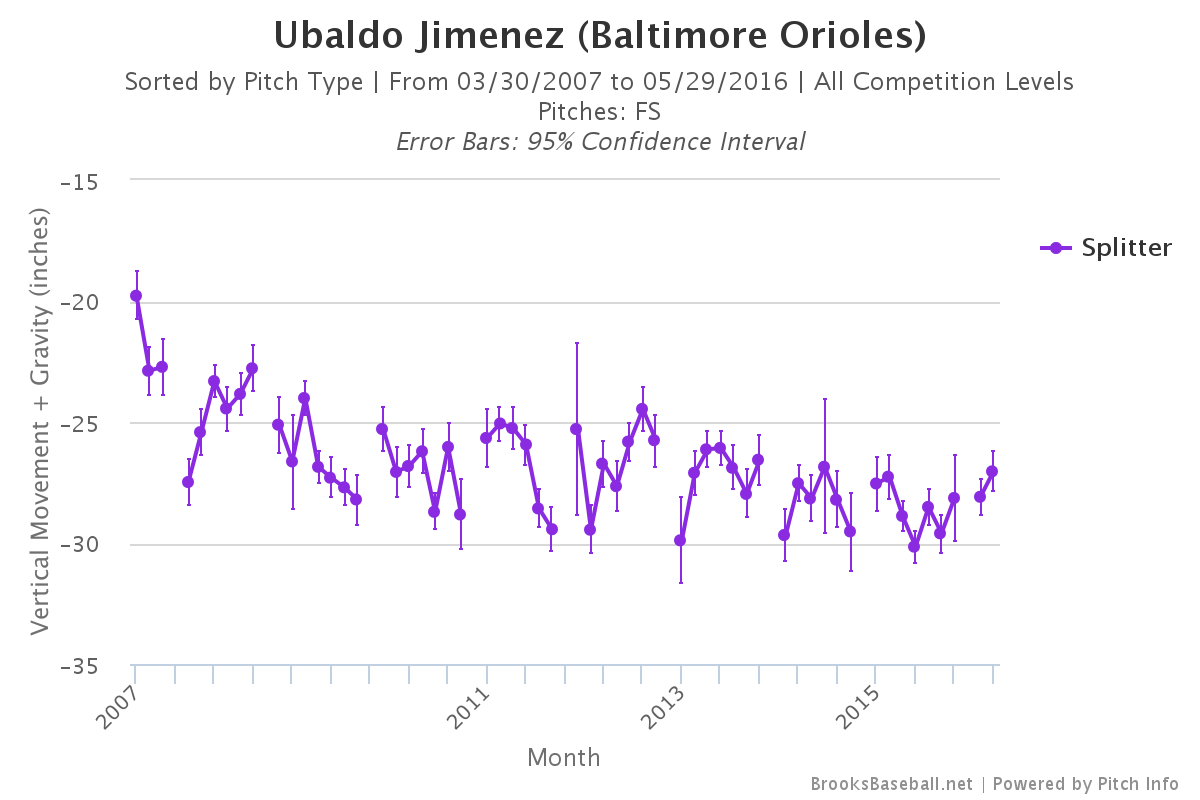 Guerra’s graph has fewer data plots, it’s true. And with time, he’ll work in a few outliers–like Tanaka’s fifth start of 2015, in which his splitter just didn’t want to split for some reason. But it’s interesting to note that Guerra’s splitter consistently incorporates just as much drop as Tanaka’s, and even more than Jimenez’s.Here’s a clip from a AAA game in April, filmed from behind the mound, just in case the data points aren’t convincing enough on their own:

When you factor in his fastball, which regularly sits at 95 mph, and a slider which isn’t special but is usable, he’s got the arsenal of a bona fide mid-rotation starter. And two years ago, he was pitching for San Marino! The last time in history that Italy influenced Major League Baseball this deeply, the Piazza family was sailing across the Atlantic Ocean.

As much as we can quantify the game of baseball, and tweak our projection models closer to perfection, the fact remains that trying to rationally predict the behavior of irrational humans remains an inexact science. A teenage prospect can get a whiff of his own fame, decide to stop working hard, and become an afterthought. Conversely, an aging, washed-out pitcher can discover an out pitch halfway across the globe and turn it into a viable weapon. That’s baseball for you.

The Milwaukee Brewers still don’t need to expect anything out of Junior Guerra, considering the circumstances by which they acquired him. But looking at his early results, and the stuff he is working with, maybe they ought to ramp up their expectations going forward. Guerra’s split-finger fastball is real, and it is spectacular.

Colin Anderle
Follow @nderleColin
I called them "Manny and the Jett" before it was cool.
read more from Colin Anderle

5 comments on “Junior Guerra Just Might Be For Real”

Congratulations on so successfully ending your article with a Seinfeld reference. Lol. We’ll done. Also, as a Brewers fan I have been following Guerra with great interest. Thanks for the analysis.