The Brewers traded Jean Segura this offseason for two reasons: With Orlando Arcia ascending and Jonathan Villar snagged from the Astros, they didn’t really need him anymore, and the Diamondbacks were willing to pay a hefty price for his services. Isan Diaz, Aaron Hill, and Chase Anderson — a prospect and two established (to different degrees) major leaguers — all came to Milwaukee in the swap. This season, the 20-year-old Diaz has played at Single A, where he’s worked a competent .246 TAv against tough opponents. Hill has revived his career, pounding out a .279 TAv and becoming the club’s best trade chip.

And Anderson? He’s…struggled. His 5.13 ERA would be grounds for removal from the rotation, in a world where Wily Peralta didn’t exist. Looking at his 105 DRA- gives us a little more optimism; observing his 115 cFIP kills that. His ground ball rate has fallen, he’s allowed more home runs per nine innings than any other qualified NL pitcher, and his solid control and adequate strikeouts haven’t compensated for that.

Anderson has not, however, been terrible across the board. He’s actually fared pretty well against left-handed hitters: Over 156 plate appearances, they’ve notched a mere .246 TAv against him. It’s the righties who have hurt him, with a .355 TAv — not a typo — in 157 plate appearances. Only four other regular pitchers (one of them Peralta, shockingly) have done worse this season. Half of Anderson’s adversaries have hit like Avisail Garcia; the other half, like Mike Trout.

This isn’t an especially new development for Anderson. I wrote in the offseason about his second-year improvements against righties, who went from a .289 TAv off him in 2014 to a .267 figure in 2015. Anderson progressed in this way primarily by changing his pitch mix against right-handed hitters — he incorporated his changeup a lot more and cut down on his curveballs. In his first season with the Brewers, he’s tossed in another variable: 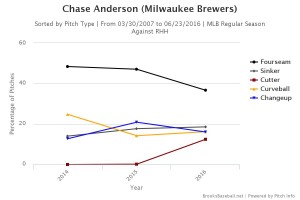 Toward the end of 2015 — as he’d later tell MLB.com’s Steve Gilbert — Anderson began to work on his cutter. He’s certainly prioritized it against righties in 2016, throwing it to them 12.4 percent of the time. The cutter has appeared just 3.6 percent of the time against southpaws, so its purpose seems to be retiring righties. The problem is that it hasn’t: Same-handed hitters have a 59.8 percent strike rate and 4.9 percent whiff rate off Anderson’s cutter, along with a .293 TAv.

With that said, Anderson’s newest addition isn’t the sole culprit for his righty woes. His four-seam fastball, sinker, and curveball have all performed poorly against right-handed opponents. This would suggest a change in pitch location, which is where things become a little tricky. For both righties and lefties, he’s adopted the Brewers strategy of down and away: 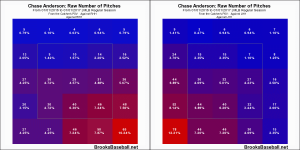 The first characteristic is perhaps the most significant. In 2014, Anderson threw 71.5 percent of his pitches to righties in the bottom three-fifths of the zone. In 2015, he increased that clip to 80.0 percent. And in 2016, he’s gone even lower (or higher), with 86.9 percent of his righty-targeting pitches landing there. But that hasn’t helped his ground ball rate against them, as it’s dipped to 37.5 percent. Same-handed hitters have put the ball in the air more often and have made harder contact overall.

Anderson’s release point likely bears some of the blame for this. He’s shifted his delivery to the left this season: 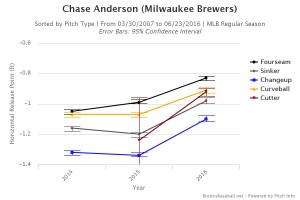 (Here, zero means the pitcher released from the exact center of the rubber. Negative means he was closer to third base; positive, first base.)

Anderson used to stand toward the right end of the rubber. He’s now centered himself a bit; perhaps by doing that, he’s made his pitch releases more visible to righties. (The change has likely had little effect on lefties, who have still stood pretty far to his left.)

This issue, like the presence of the cutter and the location change, theoretically has a solution. Anderson can remedy these problems at any time, and I’d expect him to do so soon. Simply going back to the old way of doing things won’t necessarily save him, though. Few pitchers can utilize the same formula for years on end without their adversaries figuring them out. For a pitcher like Anderson, without great velocity or stuff, such familiarity can be deadly. He’ll probably have to continue tweaking his approach to get back to where he once was.

When the Brewers dealt away Segura, they knew they’d get back three interesting players. But they also knew Hill would probably leave at the end of the year (if they didn’t trade him before that), and Diaz wouldn’t arrive for a few more seasons. Anderson was supposed to be the immediate payoff from the trade; to this point, he’s been a replacement-level starter on a team that could really use someone better. With his platoon split rearing its ugly head, he’s found himself adrift, and even if he reverses the trends that have exacerbated it, he might not regain his skill from years past.