Last week, I wrote about the differences between Chase Anderson’s 2014 and 2015 seasons. If you haven’t read that yet, do so now, because  it’ll give some background regarding his performance. In a nutshell, Anderson shifted his whole arsenal down and in, which gave him lower strikeout and walk rates and generated weaker contact. It wasn’t clear overall if he’d gotten better, but he definitely changed.

Had I taken the time to examine his splits, I would have seen an area where he certainly did improve: against right-handed hitters. During Anderson’s rookie year, lefties notched a .254 TAv when facing him, but righties crushed a .289 TAv off him. As a sophomore, he continued to hold left-handers down, to the tune of a .261 TAv, while he lowered his right-handed TAv against to .267. That massive 22-point jump ensured Anderson would keep his spot in the rotation, whereas before a trip to the bullpen might have awaited him.

Anderson didn’t beat righties by blowing them away — his strikeout rate against them dropped from 24.6 to 15.5 percent. At the same time, though, he cut his walk rate from 6.7 to 4.4 percent and reduced the quality of contact off him. His BABIP and home-run rate versus same-handed hitters fell from .374 and 3.4 percent, respectively, to .297 and 3.2 percent. In other words, his evolution against right-handers epitomized his evolution overall.

In terms of pitch background changes, there are a few. First and foremost, Anderson moved his location:

The 2014 version of Anderson threw 71.5 percent of his pitches in the lower three-fifths of the zone; the 2015 version took that up a notch, to 80.0 percent. That helped him increase his ground-ball rate against righties from 41.0 percent to 46.7 percent, which would account for the decline in home runs and BABIP.

Anderson didn’t stop there, though. He also altered his pitch usage when facing right-handed hitters: 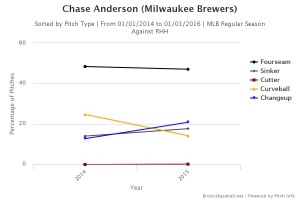 Essentially, Anderson switched his curveball and changeup. He decreased the former by ten percentage points (from 24.7 to 14.2 percent) and increased the latter by eight (from 12.8 to 20.9 percent). The changeup has always stood out for Anderson — per FanGraphs, it’s been worth 14.8 runs over the past two seasons, putting him just outside the top ten — so that change seems advantageous. The higher strike rate that the changeup brought helped Anderson when it came to free passes, which negated the absence of strikeouts.

Can Anderson continue to retire righties with this recipe? Changeups can have a reverse platoon split, and if he keeps relying on his cambio versus right-handers, he might run into trouble. With that said, the overall quality of the pitch, combined with the strength of his sinker (which tends to fare better against same-handed hitters) should compensate for that. Plus, he does have the location change, which should allow him to maintain the soft contact and keep him, at the very least, competent.

Anderson will get a run through the rotation in 2016, and we’ll get a more definite answer regarding the 2014/15 question. Before then, we can somewhat conclusively say that he’s gotten better against righties. Whereas the role of a LOOGY once awaited him, he now has the potential to stick as a starter, as he’s finally figured out how to eliminate same-handed foes.

1 comment on “How Did Chase Anderson Improve Against Righties?”