Tl;dr: The Pirates won 3-2 via a walk off throwing error during a lead off Josh Harrison triple in the bottom of the ninth. No, I did not make that up.

Top Play (WPA): Surprisingly not the Josh Harrison play! WPA sometimes produces a weird result, but let’s roll with this. According to WPA, the top play of the game occurred in the top of the ninth inning, when Hernan Perez hit a single off Mark Melancon. The hit scored Ryan Braun to tie the game at 2, and after the relay throw, Jonathan Lucroy was at third base and Perez had advanced to second (.382). Perez’s hit occurred with two outs.

Before the bottom of the ninth, Perez looked like he might be a hero of the game. He’d driven in two of the Brewers’ three runs, and had another hit in the game, which actually was a line drive off Pirates starter Jameson Taillon’s head. Luckily, Taillon stayed in the game after the ball ricochet into left field.

Walk Off Play of the Game: As mentioned in the top section, Josh Harrison hit a triple to the gap in right center, then scored on a throwing error to end the game. Before I go into further detail, let it be said that Harrison crushed the ball. Both pitches Thornburg threw to Harrison were four seam fastballs, which Thornburg has thrown at a frequency of 64.32 percent this year. The second pitch was 94.4 MPH, slightly below his average velocity of 95.46 MPH and slower than his first pitch, which was 95.3 MPH. In 2016, right handed batters like Harrison are batting .179 against that pitch and only slugging .321. While the middle-in location left something to be desired, that’s a pitch that Thornburg has regularly thrown to great effect this year.

On the defensive side, Kirk Nieuwenhuis made a good, if a little too aggressive, attempt to catch the ball. It looked like he almost had the ball, but he ran out of space and hit the wall. If he’d played it off the wall, perhaps Harrison has to stop at second. Even after hitting the wall, Nieuwenhuis recovered quickly and got the ball to relay man Scooter Gennett.

Gennett made another aggressive play, attempting to get Harrison at third base. Unfortunately, he didn’t make a great throw. It looked like it bounced right behind Harrison as he dove for the base, crossing up Perez and making the catch difficult. Perez attempted to stay on the base instead of making sure he blocked the ball, and of course the ball got by him. With no one backing up the throw, it went out of play, and that’s how a walk off happens. All it takes is several well-intentioned but overly aggressive moves to snowball and cost the team a game.

Bottom Play (WPA): The bottom play of the game occurred in the top of the eighth inning. The Pirates led 2-1 and pinch hitter Jake Elmore led off with a walk. Jonathan Villar grounded into a double play to end the threat to the Pittsburgh lead (-.177).

Trend to Watch: Though he scuffled through the first inning and Pittsburgh scored two runs, Junior Guerra threw 6 innings, allowing only three more baserunners (one hit, one walk, and one error) and no more runs after the first. As mentioned previously, his splitter proved to be a strong weapon again, and keyed his success. He threw the splitter for eighteen of this 106 pitches, and used the pitch to induce half of his strikeouts in the game (three of six). The Pirates swing and missed at 33 percent of his splitters, above his seasonal average of 21.99 percent going into the game. Interestingly, his splitter usage spiked to 35 percent in his July 4 start against Washington. In that game, he struck out seven and allowed no runs in 7.3 innings. However, in his two starts since then, Guerra has thrown the splitter less than 18 percent of his pitches, and has allowed five runs in 11.7 innings.

In that first inning, Guerra did throw four splitters, but if you can make out those four dots at the bottom of the chart, they were terrible. 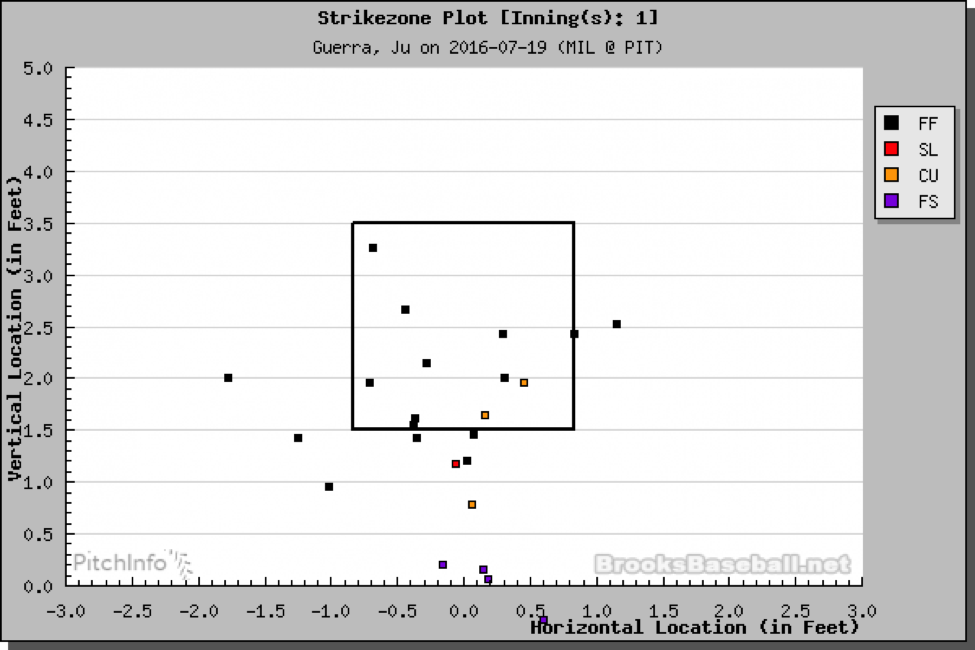 As effective as the splitter is, Guerra is. Once he got it on point after the opening inning, the results were much better.

Up Next: Game two of the series in Pittsburgh will feature Chase Anderson starting for the Brewers against Jeff Locke for the Pirates. Anderson has not reached the fifth inning in a start since June 13, though to be fair the four start since then have been home and away against the Cardinals and Dodgers. Locke has also had an uneven season. In his last start, also against the Cardinals, he allowed five runs in 4 innings. First pitch is 6:05.

Andrew Salzman
Follow @RealAndrewSalz
Personal fun facts: I've been to every current MLB stadium, my favorite animals are bears, and I consider myself an expert on fast food. I also really like baseball and am a licensed lawyer.
read more from Andrew Salzman