Tl;dr: The Brewers ninth inning rally fell short as they lost 4-1 to the Cubs, dropping both ends of the double header. More importantly, Chase Anderson and Ryan Braun left the game with injuries.

Top Play (WPA): Kris Bryant’s third inning single, which scored David Ross and opened the scoring at 1-0, was the game’s top play (.122). In his first at bat, Bryant hit a liner off Chase Anderson’s knee, knocking him out of the game. Bryant then hit the single off Jhan Marinez, who was drafted into emergency long relief duty since Anderson’s outing ended on his 11th pitch. Marinez ran into trouble in the third inning as he failed to put away the bottom of the Cubs order, allowing David Ross to walk, then giving up a single to starter Jason Hammel. After retiring Matt Szczur for the second out of the inning, Bryant did his damage to put the Cubs on the board.

Marinez gave the Brewers 2.7 innings, his longest outing of the season. It wasn’t pretty: he allowed four hits and three walks while striking out none. He didn’t induce a single whiff and he badly faded in the fourth inning where only threw nine of his twenty-one pitches for strikes. However, he chewed up some innings and kept the Brewers in the game, ugly strike zone plot be damned.

Worst Play (WPA): Speaking of that fourth inning, the Cubs had a chance to break the game open and potentially put the game away. Marinez was pulled after he loaded the bases with one out via two singles and a walk. Blaine Boyer entered the game. While he probably wasn’t Craig Counsell’s first choice to enter in such a high leverage situation (6.38 DRA and 51% GB percent in 2016), he got David Ross to ground into a double play to end the threat (-.132).

The actual worst play for the Brewers also occurred in the fourth inning as Ryan Braun hurt his knee trying to make a catch down the left field line and had to exit the game.

Trends to Watch: Hernan Perez’s home run in the ninth inning ended 17 scoreless innings for the Brewers yesterday. Whether fatigue or the mastery of Hammel and the Cubs bullpen, Milwaukee only had two runners reach second base through the eighth inning. However, they got to Travis Wood in the ninth. Looking at his pitch plot, he stayed way too much in the zone. Everything was around belt high, and over the plate. 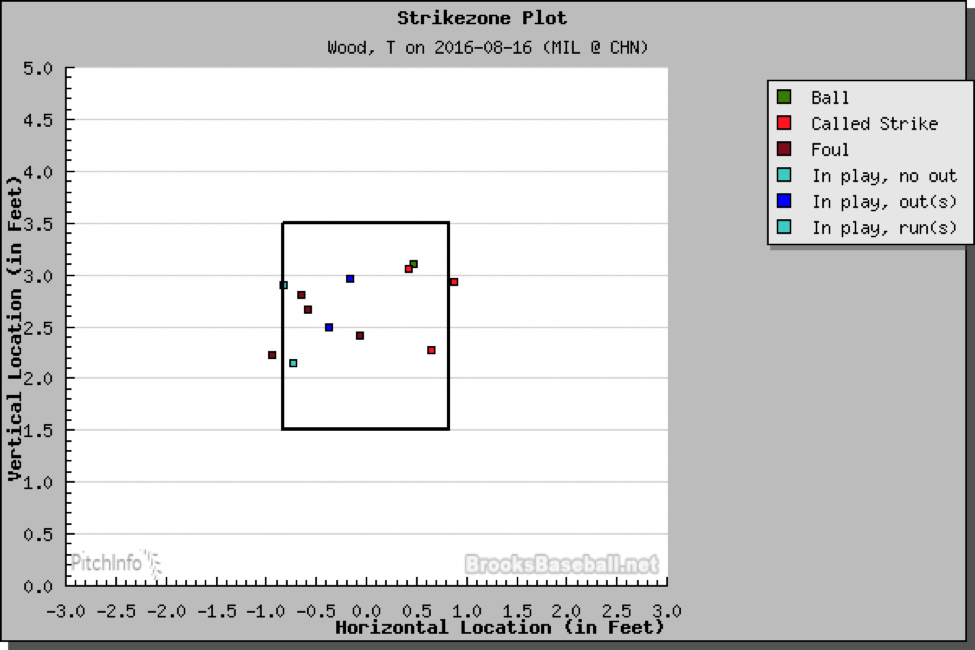 Perez’s home run is the lower sky blue dot in that chart, and according to his zone profile on Brooks Baseball, he’s slugging .600 on pitches in that zone this year. And while the Brewers rally fell short, the home run and Chris Carter’s subsequent single chased Travis Wood from the game. Joe Maddon chose to use Aroldis Chapman even though he pitched in the first game of the double header, which should make him unavailable today.

Ephemera: By scoring in the ninth inning, the Brewers avoided getting shutout in a double header for the first time in team history. The last time any team was shutout in both ends of a doubleheader was way back in 2014 when the Yankees pulled the trick against the Cubs.

Up Next: Agonizingly, the series with the Cubs is only halfway complete after yesterday’s doubleheader. Jimmy Nelson will start for the Brewers. He completed five innings and allowed three runs in his last start. He’s already faced the Cubs twice this season, including what was likely his best start of the season, taking level of competition into account. Way back on May 18 he pitched 7.3 innings of no run ball against Chicago. Jon Lester takes the hill for the Cubs. Lester faced the Brewers on July 24th and had one of his worst starts of the season. In four innings he allowed four runs on four hits and five walks. First pitch is 7:05.

Andrew Salzman
Follow @RealAndrewSalz
Personal fun facts: I've been to every current MLB stadium, my favorite animals are bears, and I consider myself an expert on fast food. I also really like baseball and am a licensed lawyer.
read more from Andrew Salzman