Last year, my colleague Jack Moore wrote about the Brewers quality attendance even in a losing season, “This year’s Milwaukee Brewers — a team that floundered horrifically out of the gate, won all of 68 games, and at no point from May onward came within 10 games within .500. And yet, a total of 2,542,558 fans paid to watch the Brewers at Miller Park this year, seventh in the National League and 13th in the Major Leagues.”

Winning usually plays an important part with attendance, as the more wins a team gets the better odds it has of drawing fans to the turnstiles. This makes sense because people like to watch a winning team. It’s simply more enjoyable to be watching a game in which your team is winning than one in which your team is losing. Which is why last year’s Brewers were so interesting. Even though it was clear, from early on in the season, that they wouldn’t be a competitive team, fans still came out to show their support.

Thus far this season, the Brewers rank 15th in attendance at 2,166,012. Which is better than Cleveland, Houston, Seattle, and Baltimore all of which are contending teams. The Brewers are not that. They are not a contending team. As you and I know, they are a rebuilding team.

In his piece, Moore also noted that “Miller Park’s consistently high attendance has been a point of pride for the organization and its fans in recent years, as the Brewers have drawn in the top half of the National League in eight of the past nine seasons”.

Moore is right: Since 2007, the Brewers have had above average attendance. (All data was scraped from baseball reference). 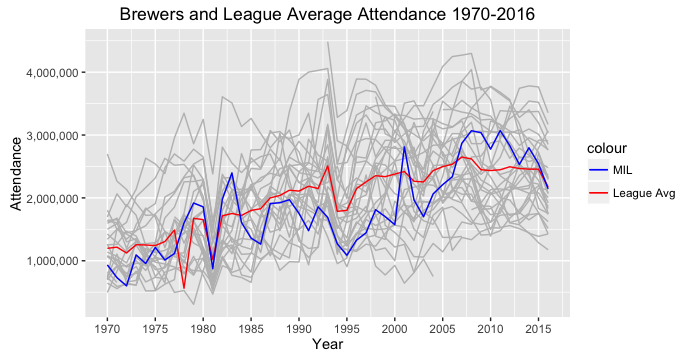 But, that wasn’t always the case. During the 1980s and 1990s, even in the early 2000s, the Brewers didn’t have great attendance numbers. In fact, after a sudden spike in 2001, the Brewers attendance was trending downward once again, until 2004, when it started going up again. That’s around the same time that Mark Attanasio bought the team. 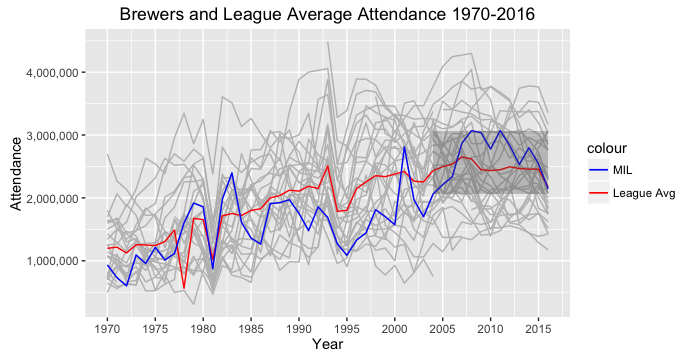 Since Attanasio took over in 2005, the Brewers have only been below average in attendance twice, in 2005 and 2006, his first two seasons with the club. Attanasio has often spoken about the importance of attendance and the Brewers faithful.

One of the amazing elements about the attendance streak is that the Brewers attendance has remained above average even though they haven’t been one of the winningest teams in baseball. 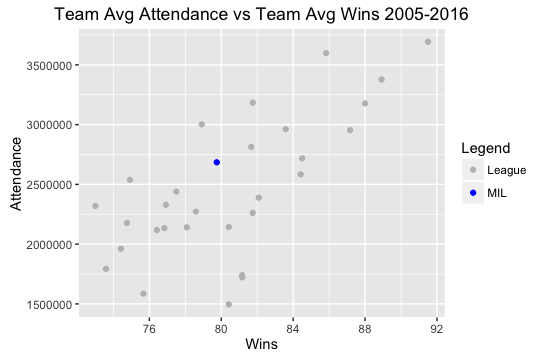 Looking at the chart above, there’s a pretty clear relationship between winning and attendance. The Brewers, during the Attanasio era rank eleventh in attendance, which may not sound impressive, but for one of the smallest markets in baseball, that’s a very good achievement, especially when we look back at their previous track record.

To further emphasize this point, I built a simple and quick linear model in R to look at how wins affected attendance. I looked at every data point dating back to 1970, and controlled for teams.

Overall, the model found that one win is worth an additional 28,144 fans coming through the gates per year. 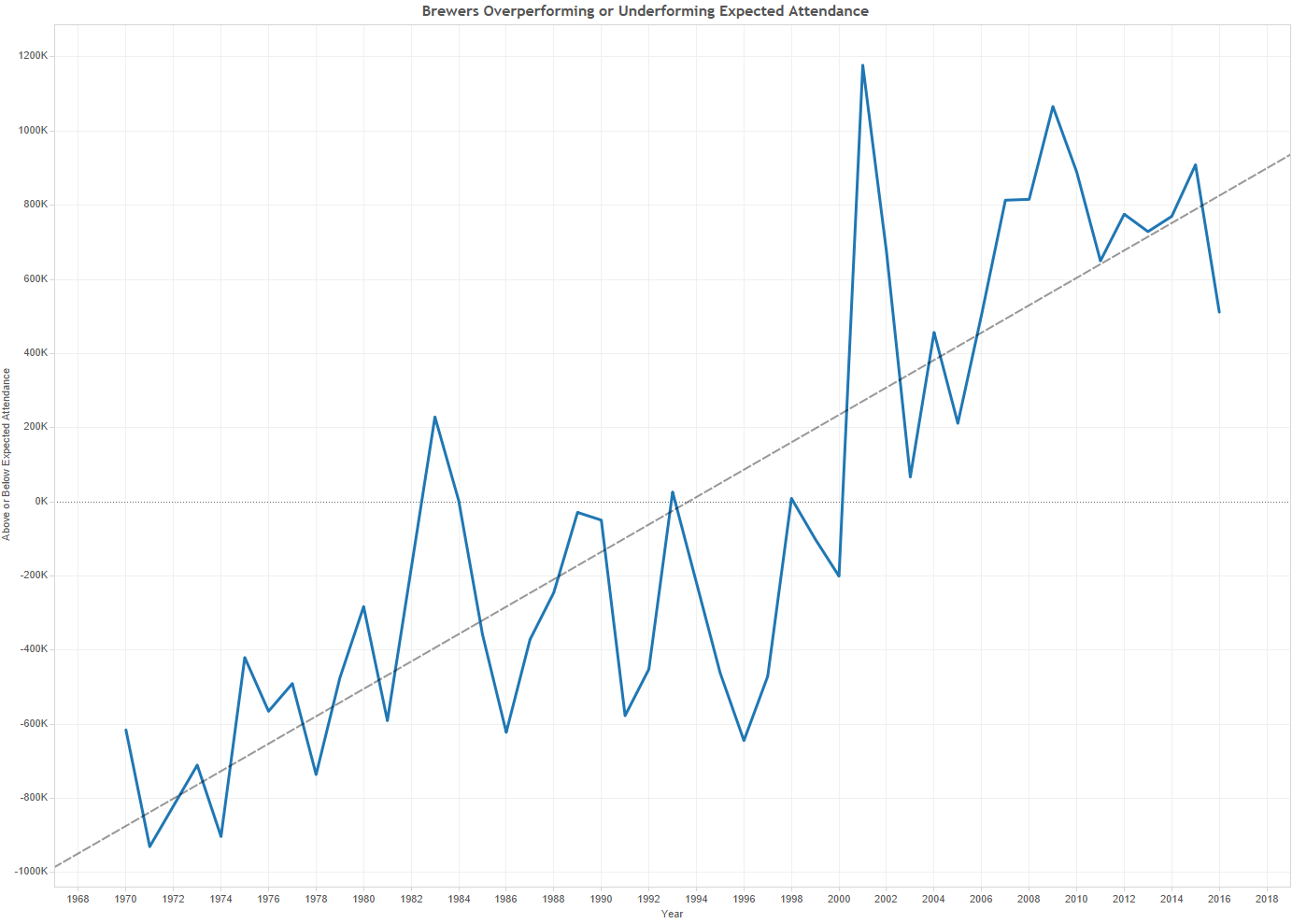 The biggest outlier in the group was obviously 2001. That’s the year the Brewers moved from Milwaukee County Stadium to Miller Park.

Above, I mentioned that Mark Attanasio seemed to have a big impact on the Brewers attendance, and he may have had. But, the move to Miller Park probably played a huge factor as well , meaning that, obviously, there is more that affects attendance than wins.

Wins definitely play a factor, and other studies have found that it plays a huge factor, but it is just one. Population and market size, along with a slew of other elements must be considered.

The Brewers, lately, though, seem to be an outlier in that department. They’ve been able to achieve above average attendance for a number of years, even though they haven’t been one of the winningest teams. Obviously, under Attanasio’s rain, the Brewers have done their fair share of winning, but it has not justified their consistently great attendance.

This doesn’t mean that the Brewers will keep having quality attendance. If the Brewers go through more and more losing seasons, then I would expect the fans to get understandably impatient, and stop showing up to the ball park. That said, that hasn’t happened yet, and for the Brewers, I sure they hope to turn things around before people stop showing up at the ballpark.

All of my code can be found in my Github account. It’s very messy right now, I will clean it up, make it more readable and add comments when I get the chance.

The retractable roof is a big factor.

I also think it has to include a ticket price factor. Brewer tickets are super cheap. The Rays, for example, stink out loud, but prices don’t reflect that.

Agreed, good point Steve, might look into this in the offseason.
Wrote about Brewers ticket prices last year.
http://milwaukee.locals.baseballprospectus.com/2015/06/29/a-sudden-rise-in-brewers-ticket-prices/

Did you factor out the Cubs fans?