David Stearns made headlines last week by saying that he expects Ryan Braun to be a Brewer going forward. Part of me does not want to read too much into the comment; general managers have incentives to lie to the media to strengthen their bargaining position, and I’m sure that’s at least part of what Stearns was doing.

But there is also probably some truth to what he said, and that isn’t exactly surprising. The Brewers have rebuilt their farm system and have some exciting talent in the upper minors, they have some quality players already on their big league roster, and they went out and signed a major league free agent (Eric Thames). All those signals indicate that the front office thinks the team will be ready to take a step forward in the next year or two, and Ryan Braun will still be capable of being a key member of those teams. Keeping him, then, gives the Brewers guaranteed above-average performance in left field, which removes one question mark.

As with most stories, though, there are two sides here. Before his bounceback 2016 season, Braun posted two consecutive years with WARP totals of 2.1 and 2.4. He is entering his age-33 season, so it isn’t a given that his improvement in 2016 is a sign of things to come. He posted 3.9 WARP and a .316 Total Average, both of which were his highest marks since 2012.

But baseball players don’t all age the same, so it wouldn’t be fair to just say that just because such a steep aging curve is unusual, that is also unlikely to be accurate. Instead, one would look at some of his more peripheral numbers to see what aspects of his performance changed between his prime, 2014-15, and last year.

His ground ball rate has steadily increased over the course of his career, while his whiff rate has fluctuated more wildly. In a vacuum, these numbers are interesting, but I am not interested in them in a vacuum. The fact that his groundball rate did not differ significantly is relevant, as it indicates there probably wasn’t a huge change in the type of contact that he was making. His whiff rate, though, does matter. 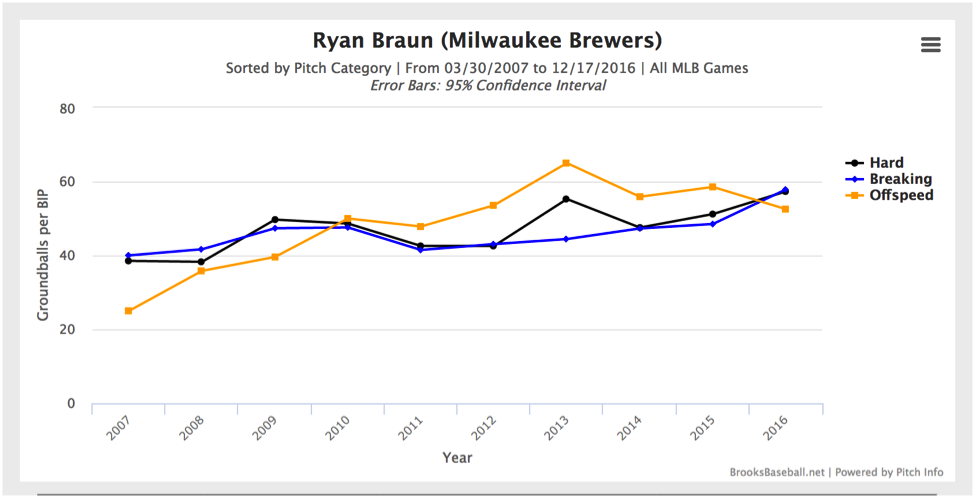 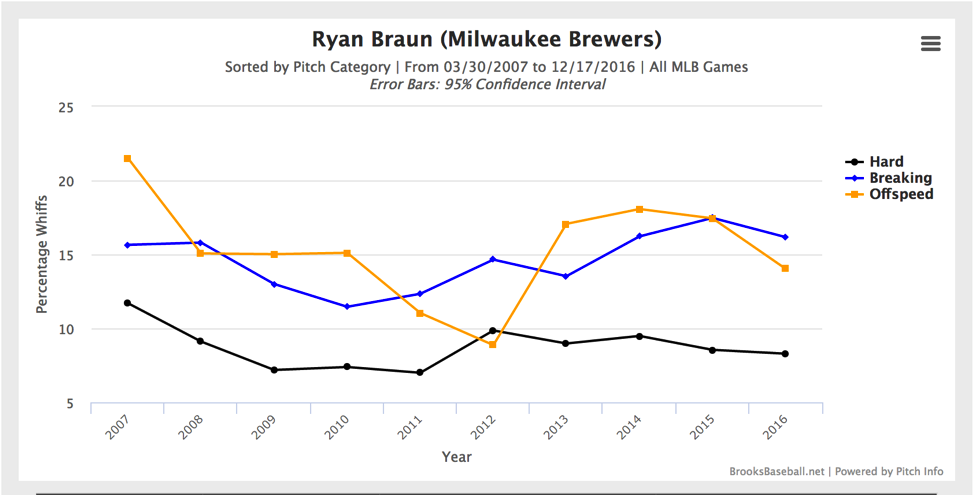 His whiff rate on fastballs throughout his career has generally remained in the same range, but there is an obvious uptick in his whiff rate on offspeed pitches after 2012. That does begin to trend back downward this year, so it is possible that an abnormally high whiff rate is at least part of the culprit. However, Braun is not a 23-year-old prospect who is looking to improve his plate discipline. Instead, he is a veteran whose physical skills are declining, so it may be naïve to expect that these numbers would continue to trend downward.

This is the case for trading Braun: He is a good player who had an outlier of a great season this past year, and potential trade partners would be more willing to give up something of value for a four-win player than a two-win player. If his 2016 was a fluke and he posts another 2.5-win season in 2017, it will be hard for the Brewers to claim that he is still the All Star he appears to be today. While he is still a good player and the Brewers would be pleased to have him in their lineup, he may be more valuable in a trade today than he would be in the lineup next year.

I don’t agree with this interpretation. I think Braun is probably closer to the four-win player from 2016 than the two-win player from the two years prior. There is an interpretation of these seasons where just 2014 was the outlier; his .298 TAv in 2015 is a big improvement on the .278 mark from 2014, and his overall 2015 WARP was weighed down by a -11 FRAA. That mark was his lowest since he moved to the outfield after his rookie season, so it is already suspicious, and it was also in right field, which Braun has since vacated to move back to his more comfortable home in left.

Overall, though, there is an interpretation of Braun’s career path that indicates his value (both in a trade and on the field) will just decline from here, so the Brewers would be best served by trading him now. This is a logical opinion, although I happen to disagree.

2 comments on “Making the Case For Trading Ryan Braun”

This analysis is very incomplete without a mention of Braun’s hand injury, which he stated left him flailing. Sure, he’s aging, but if the obvious spike is due to the injury, then we’d expectv some return to the previous norm, even as aging would contribute to some decline.

Good article. But any assessment of 2014-15 that doesn’t include the word “thumb” is missing a critical part of the equation.