So far in 2017, the Brewers have received elite offensive production out of both of their catchers. Entering play Wednesday, Jett Bandy slashed .321/.367/.607 with a .333 True Average (TAv) in nine games, while Manny Pina is putting up a corresponding .433/.452/.633 and .367 TAv in nine games of his own. This from a 27-year-old and 29-year-old, respectively, neither of whom was ever regarded as a prospect. April in Milwaukee has been full of surprises, but perhaps none has been greater than the fact that these two afterthoughts have timeshared their way into elite-level offensive production. But on the defensive end of things, it is Pina who has been the superior player, and it’s not even close.

In January of 2016, Baseball Prospectus released a whole slate of new, retroactively-calculated statistics to measure catcher performance. One of these was Framing Runs, which estimated how many runs were saved, or lost, by a catcher’s framing performance. Former Brewers superstar Jonathan Lucroy’s 43.5 Framing Runs in 2011 remains, to date, the highest number recorded in MLB history.

This year, Pina has been doing a fantastic Lucroy impression when Craig Counsell pencils him into the lineup. Statistically, only Yasmani Grandal and former Brewer Martin Maldonado have been better pitch-framers in April. In nine games, Pina has saved Milwaukee just shy of two runs total by turning borderline balls into borderline strikes.

Bandy, on the other hand, has not excelled at this part of the game. Out of 67 qualifying catchers, Bandy ranks 63rd in frame rate. He’s nearly canceled out Pina’s stellar defense, giving back 1.5 of those 1.9 runs saved when he dons the gear. Matt Wieters, who I cautioned against signing this past off-season in large part due to his subpar frame rate, ranks just ahead of Bandy’s pitch-framing game. And Bandy is only sharing the playing time; the other five catchers composing the bottom six for frame rate are all full-timers.

This is not a subtle difference in skills. This is the equivalent of Jonathan Villar vs. Prince Fielder in a discussion about base-stealing. Going by performance so far this season, there’s no question that Pina should be the starter, with Bandy spelling him 1-2 times a week. But, instead, the division of labor has been almost exactly 50/50. Why?

Well, one reason is that this stark contrast in defensive prowess is a relatively new development. Bandy’s framing statistics in the minor leagues indicate that he should be better at this than he’s shown so far:

Conversely, Pina has never been this skilled a pitch-framer before now: 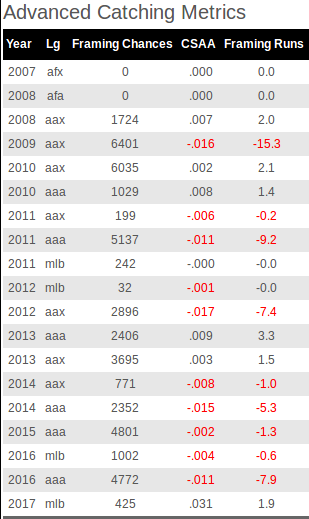 In fact, over his pro career, Pina has been an inconsistent framer, but he’s been worse than he’s been good, on aggregate. Still, one can’t just assume that this flash of brilliance is just a fluke. Pina is a player who is capable of improving his game. For example, just look at how his offensive game has developed.

In 2010 and 2011, Pina was enough of a prospect to get a single sentence in each year’s BP Annual, and both years he was referred to as some form of “good field/no-hit.” From 2011-12, he saw exactly 16 below-replacement-level MLB at-bats for the Royals before disappearing for a multi-year banishment to AAA. Between the 2014 and 2015 seasons, however, the would-be career minor leaguer apparently changed something in a desperate attempt to reverse his fortunes. You’ll notice that his slugging percentage, isolated power, and true average each took a significant leap forward that season, and have held ever since: 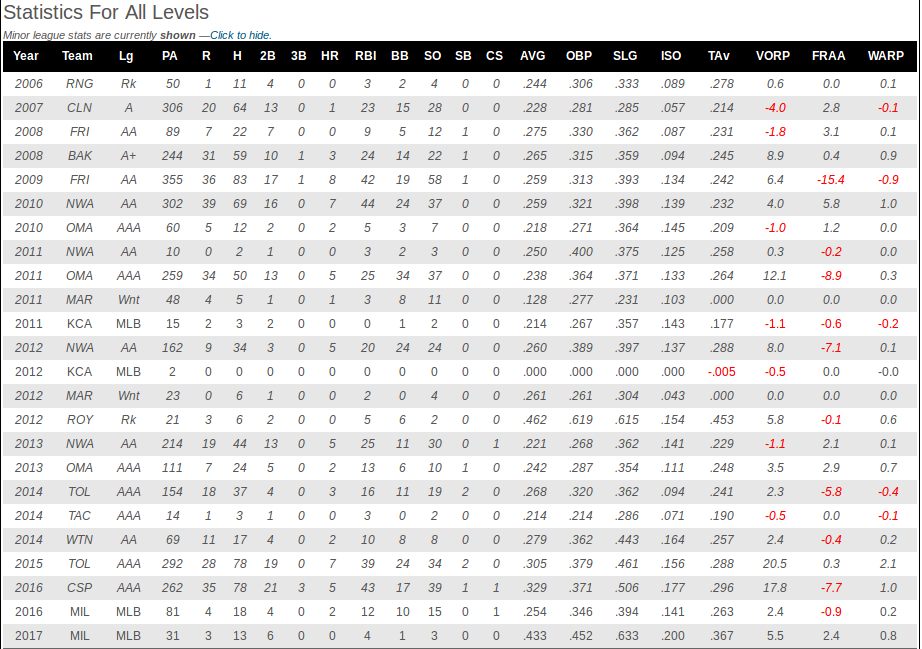 Pina is the definition of “warning track power,” and even with the improvements he’s made offensively he’s unlikely to ever hit double-digit home runs at the Major League level. Statcast confirms this by telling us that, while Pina tends to hit the farther than average, he doesn’t really hit it much harder than average:

A look at the data on Fangraphs, who have tracked hard, medium, and soft contact ratios for years, sheds some light on this anomaly. Pina does not have home-run power, but he’s done a great job of maximizing what power he has by avoiding soft contact:

Despite his age, Pina has seen just 129 Major League plate appearances so far. As the book on him starts to get written, it’s entirely possible that this trend will start to correct itself, and Pina’s talent for avoiding bad contact will disappear.

If you believe in Pina’s unique skill set, and you think that he’s going to withstand the adjustments as pitchers learn how to make him work, it makes sense that he should get the majority of the playing time. He’s the better defender by a good margin, and Bandy’s high-octane bat makes him an elite backup. If you believe that Pina’s just getting lucky, especially if you feel that Bandy is capable of framing like he did in the minors, you’d feel that the opposite should be true. Bandy’s track record as a pro is far more encouraging, after all.

At the end of the day, for now the team is hedging their bets for now and giving each catcher a chance to assert their claim to the job. It’s awfully hard to argue against the success that this approach has brought so far.