In order to address this question, I employed Baseball Prospectus CSV data of MLB Pitchers By Team (retrieved August 31, 2017). To construct the ideal of actual rotational roles, I organized pitchers by team, then games started, and, finally, Deserved Run Average (DRA). The goal of judging players by games started is to find the number of pitchers that regularly work in a rotational role. It is important to state that this method does not adhere to the scouting definition of rotation roles (where pitchers are assessed by stuff, command, risk, and projectability, among other factors, in order to judge their #1/#2, #3/#4, or back-end status), or even adhere to fans’ common statements about aces (for example, Brewers fans would call Chase Anderson a club ace regardless of his games started; the fact that he was injured and missed rotational turns would not necessarily impact that assessment because his performance is so strong in 2017).

Related Reading:
Aces Do Not Exist

However, I believe it is necessary to push back on these common rotational assessments used in common speech and scouting circles, in order to illuminate the actual mechanics of a rotation. Once an alternative mechanics of rotational roles is constructed, fans and analysts will hopefully have another vantage point from which to view pitching staffs and thereby realign their views about aces, middle rotation starters, and replacement pitchers.

To start, as of August 31, 2017 there are 314 starting pitching seasons employed by MLB clubs. Undoubtedly, this number is inflated due to trades. For example, Jaime Garcia has worked for several clubs due to trades; while Garcia is only one pitcher, it is important to outline his three pitching seasons if one is to understand the actual rotational mechanics of the 2017 season. Basically, this number of starting pitchers should already cast doubt on the “5 Spot Rotation;” even if there are theoretically five turns in a rotation, injuries, ineffectiveness, trades and waiver transactions, and minor league call-ups cause teams to use approximately 10 starting pitchers by the end of August.

Once pitchers are organized by Team and Games Started, rotational mechanics can be observed. Separating Games Started by percentile (in 10 percent jumps), there are approximately 10 rotation spots plus emergency starters in 2017 MLB rotations: 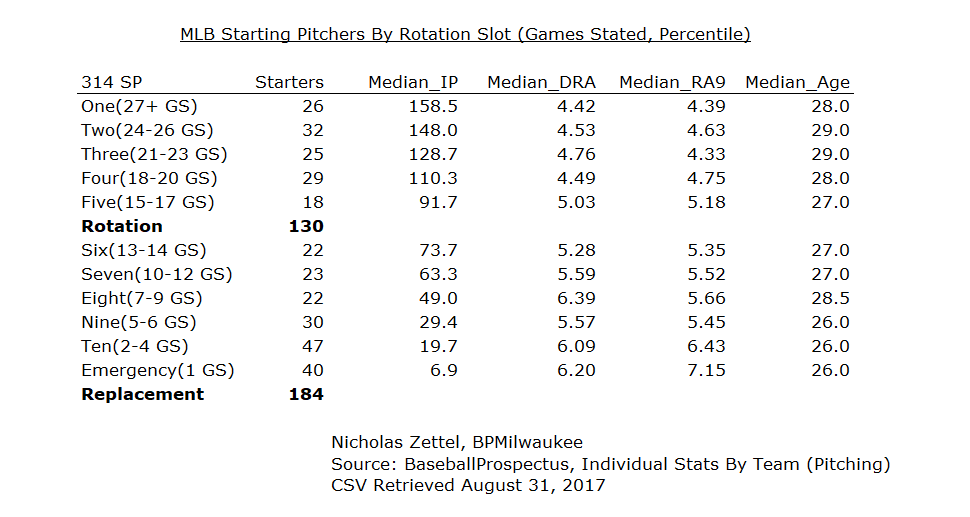 From this table, it should become clear that there are not necessarily five rotation spots, and perhaps even fewer rotational spots than that. It is interesting to see that pitchers that have made the most rotational turns in 2017 are indeed the best by DRA and Runs Allowed per 9 Innings (RA9), but also that “third” and “fourth” rotational turns feature good arms. This should reflect the impact of injuries on a rotation.

Once this list is assembled, one can abstract each rotation spot. To respond to Lesniewski’s challenging question, I focused on the fifth rotational spot, but one could conceivably do this with each spot. To construct a fifth spot, I counted upward from a team’s Emergency Starters until I reached 27 Games Started, which is one full rotational turn at this point in the season. Of course, because different teams use their replacement pitchers in different ways, 27 was not always the clean number, so I placed a top limit of 39 GS on this search. In this regard, some teams had a “fifth spot” with 26 GS, and others used 34 GS, etc. What the next table will show is that some teams strictly use starters in these roles, while other teams rotate relievers and swingmen into the mix: 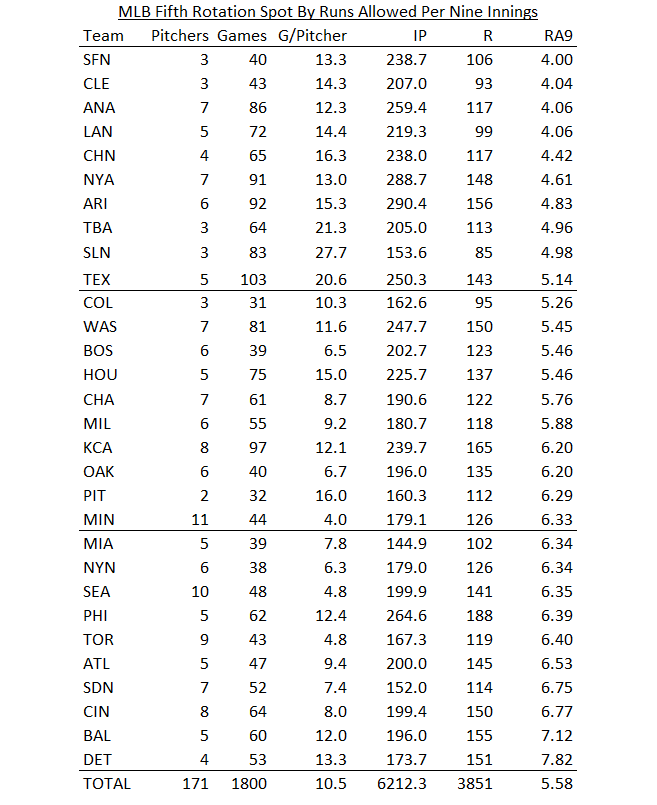 With these searches in mind, it is worth doubling down on the question about whether rotational roles exist. This is why Brewers fans should not dismiss the “Brewers only have depth in their minors, but not an ace” line. First and foremost, it is not evident that an MLB rotation is anything other than a test of systematic depth; when teams are almost required to employ 10 starting pitchers, the ideal of an “ace” or “#3″ or “innings eater” is not necessarily more significant than that of “employing quality depth.” Furthermore, it is also not clear that a team’s best pitchers universally pitch the most games; this is evident from the “third” and “fourth” rotational turns exhibited above, where MLB teams received solid DRA and RA9 from their starters with 18-23 GS (or, 67 to 85 percent of a full season workload). It will be important to return to this exercise once the season is finished, in order to complete the data. But, at this point, one can understand that it is worth questioning the existence of set rotational roles in MLB, or even the ideal of a set rotation.