Unfortunately, the Brewers season ended on Saturday night. While many national media outlets breathlessly reported on Milwaukee’s pitcher usage and its sustainability throughout the playoffs, it was the bats that failed the team in the National League Championship Series. The Brewers won every game in which they scored at least four runs, but they couldn’t sequence their scores correctly in the last four games of the series, consequently losing three of those games while scoring four total runs. With a slightly better performance at the plate, fans would be focused on the World Series and national writers would be rehashing their columns on whether the Brewers would blow out their bullpen by Game Four.

While the series is over and done with and the team should be looking forward and planning for next season, there was one decision I wanted to revisit from Game Seven. Before the game, the pitcher usage had been fully mapped out, with contingencies built in based on what actually occurred once the game started. Thus, lifting Jhoulys Chacin for a pinch hitter in the bottom of the 2nd inning with two outs and runners on second and third was not a surprise, nor is it a decision I feel qualified questioning. However, I think using Jonathan Schoop as the pinch hitter in that specific spot was a legitimate tactical error which contributed to the Game Seven loss.

Leverage Index is a stat which quantifies the importance of a situation in a game, where the average is 1.0 and the higher the number, the higher leverage the situation. That plate appearance had a leverage score of 1.86, making it the highest leverage plate appearance in the game for Milwaukee, yet Jonathan Schoop was the batter at the plate.

Up to that point, Schoop was 0-for-7 in the playoffs, including two pinch hitting appearances. Schoop’s performance since coming to Milwaukee had no hidden indicators that he was good selection for this spot. Other than running into a few balls, Schoop hadn’t hit in three months and spent October swinging at everything. Using Schoop didn’t even get Milwaukee the platoon advantage, so there was no old-school baseball rationale either.

Walker Buehler attacked Schoop with sinkers. He threw only nine sinkers in the game, and four were in this at-bat. Schoop only swung at two of the pitches, both of which were arguably balls, but he still grounded out the end the threat.

Domingo Santana would have been a better choice for the situation. Since his recall on September 1, Santana slashed .409 batting average /.458 on-base percentage /.909 slugging percentage in pinch hitting appearances during the regular season, and added another two hits and two walks in ten playoff pinch hit opportunities. Pinch hitting is an acquired skill and Santana had at least shown some knack for it in the past six weeks. He did get a pinch-hitting appearance with one out in the fifth inning, but the leverage index on that at bat was .97, almost exactly half of Schoop’s plate appearance.

With the aggressive use of the pitching staff, it’s slightly baffling as to why they held back their best pinch hitter and Curtis Granderson in favor of Schoop. None of them played in the field, so no defensive considerations seemed to play into the decisions, so it should have purely been the best hitter in that spot. You cannot save a better hitter for a higher leverage situation which may never come, and it didn’t in Game 7.

Jeremy Jeffress had a poor postseason, as I’ve unfortunately noted in the past two weeks. He allowed runs in three of his eight appearances and only had one game where he didn’t allow at least two baserunners. On Saturday entered the game in the 6th inning with a runner on first and wound up giving up a backbreaking home run to Yasiel Puig which shot the Dodgers’ win expectancy up to ninety-one percent. In Jeffress’ 1 and 1/3 innings, he threw twenty pitches, none of which were splitters. It was only his third game this season where he threw at least twenty pitches and no splitters. All of those outings have occurred since September 10th. 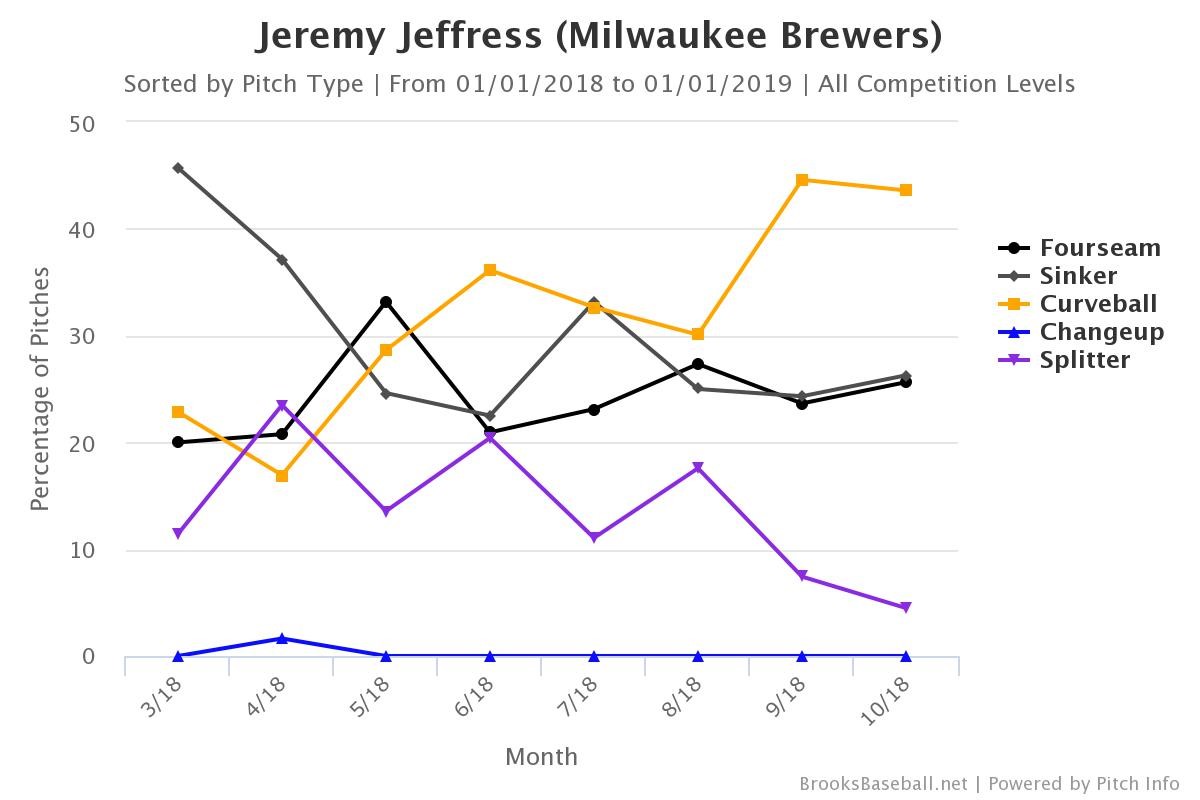 Starting in September, Jeffress drastically reduced his splitter usage. For the season, batters hit .209 against the pitch with only a .045 isolated slugging percentage, making it one of his most effective pitches. The splitter also had a seventeen percent whiff rate, on par with Jeffress’s curveball. However, those whiffs almost completely disappeared in September and October, with only one swing and miss on eighteen total splitters.

While it probably doesn’t fully explain Jeffress’s struggles, his pitch mix lost its balance when he stopped throwing the splitter and he started struggling. If it was a matter of feel, he has the whole offseason to regain confidence in the pitch or develop another weapon to induce swings and misses, because his results took a step back in October.

Christian Yelich had a tough postseason, but his struggles shouldn’t be a cause for concern for Brewers fans. First, the approach pitchers took against Yelich is not sustainable for a full season, unless they’re prepared to walk him at a rate comparable to Barry Bonds. Here’s the zone profile for Yelich for all of 2018: 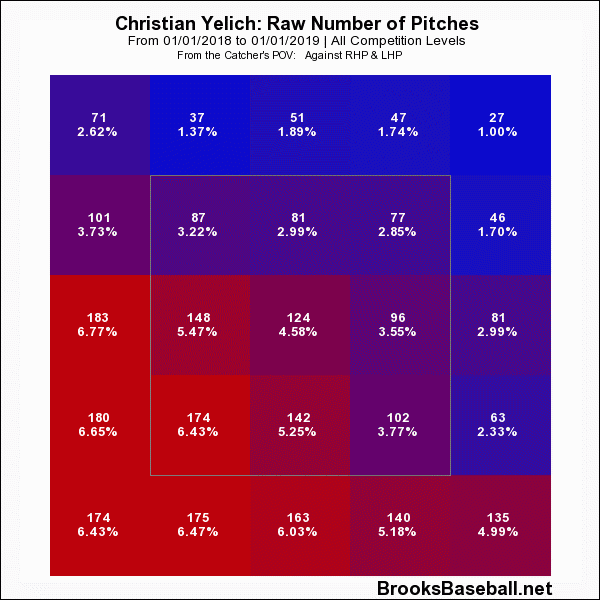 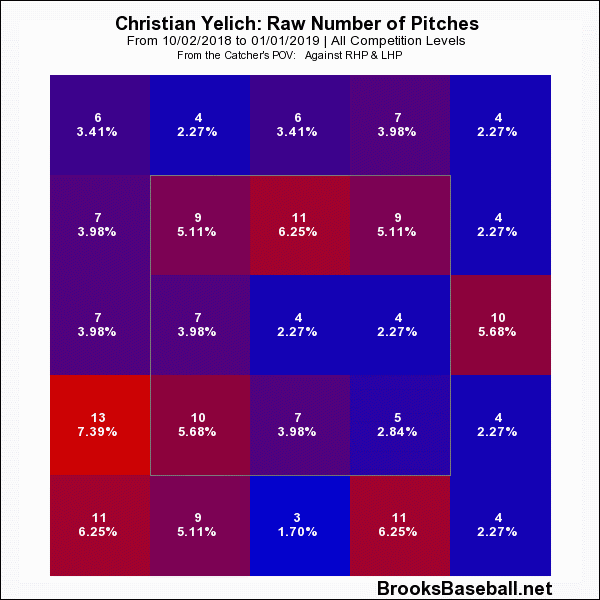 While there was some effort to stick with the general plan to pitch him low and away, there’s a lot of blue in the strike zone and a lot of red bordering it. Pitchers spent three weeks staying away from Yelich, which makes sense after his second half of the season. However, pitchers will have to throw him more strikes in 2019. Yelich also maintained his plate discipline during the barrage of balls. He cut down on his swings on non-fastballs and also swung and missed less on breaking and offspeed pitches, while staying around his seasonal fastball whiff rate. By focusing on pitches in the zone, Yelich will lure pitchers back into throwing more strikes and he should pick up at the start of next season where he left off on October 1st.

Unfortunately, there’s no new series to preview this week for the Brewers. While the result fell short of what fans were hoping for, it’s important to remember the ride to Game Seven and not focus on the NLCS loss itself. This was a fun team to follow all season and is poised to repeat its performance next season while also changing expectations on what a pitching staff should be in terms of usage and the best fits of skills in each role. The organization works as one unit and made an experiment like Travis Shaw: Major League Baseball Second Basement evolve from a sarcastic joke to a legitimate option by the end of the season. Remember the fun in getting to this point and start getting excited about what team will be put together this offseason.