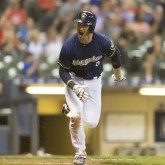 In terms of run production, the Brewers offense surged in the second half of the season. While the trade acquisition of Jonathan Schoop did not boost the offense as expected, GM David Stearns hit on Mike Moustakas and Curtis Granderson, which induced benefits at second base with Travis Shaw (who posted a .223 average / […]

Unfortunately, the Brewers season ended on Saturday night. While many national media outlets breathlessly reported on Milwaukee’s pitcher usage and its sustainability throughout the playoffs, it was the bats that failed the team in the National League Championship Series. The Brewers won every game in which they scored at least four runs, but they couldn’t […]

After two games, the Brewers are tied 1-1 with the Los Angeles Dodgers in the NLCS. The blown lead in Game 2 will not sit well with the team if they fail to advance to the World Series, but the Brewers are not in a terrible position as the series heads to Los Angeles. Everything […]

The Brewers have advanced to the National League Championship Series. Their pitching staff carried the series as Craig Counsell’s out-getters gave up two runs in the three-game sweep of the Colorado Rockies. As a team, the Rockies mustered only twenty-two baserunners over twenty-eight innings while striking out thirty times. Outside of a nerve-wracking Jeremy Jeffress […] 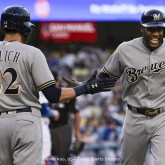 The Brewers are in the Wild Card pole position as they enter the final week of the regular season. They went 4-2 against the lower tier of the National League Central, allowing the Reds and Pirates to score fewer than two runs a game. While it appears the division title is out of reach, the […]

After two weeks of inconsistent play, the Brewers finally had a week befitting a team that once was jockeying for the best record in the National League. Milwaukee started the week winning two of three games against the Nationals then they traveled to San Francisco and won the first three games of the series before […] 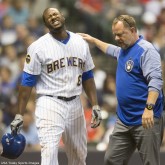 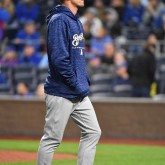 Just in time to test an eight game winning streak, our beloved Milwaukee Nine head south to take on the Lakeview Baseball Club, the new Evil Empire, the undisputed dynasty of the National League Central who will win the division without question. (We have the spreadsheets to prove it, why are we even playing the […] 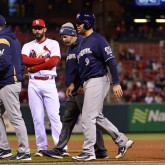 A month ago, had someone told Brewers fans and analysts that the club would be .500 after their first dozen games, I gather no one would have even shrugged. First things first, there is this essential feeling that even though *every game matters*, early in the season is the time to iron things out and […]