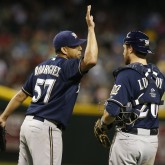 TOP PLAY (WPA): In the top of the sixth inning with nobody out, Ryan Braun broke the scoreless tie by going opposite field on the first pitch for his 18th home run of the season (+.162 WPA). Unlike last night, there was nobody on base for Braun, but a solo shot proved devastating enough as […]