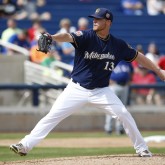 Will Smith tore a ligament in his right knee on March 24th. The Associated Press reported, “Smith said he was getting ready to shower after pitching in a minor league game on Thursday and was standing on one leg to take off his other shoe when he lost his balance and twisted the knee. “‘I […]