The thing about the bottom falling out is that there’s usually no warning. So it was for Luke Barker on June 10, 2015, the final day of that year’s MLB First-Year Player Draft. Barker sported a 2.91 ERA over 72 collegiate appearances, stands 6’4” and weighed in at 210 pounds on draft day. He has […]

On Tuesday morning, the Brewers’ affiliated minor league rosters were announced, showcasing the roster decisions made by GM David Stearns and the player development staff in perhaps their most important rebuilding season. 2017 is the year that talent acquired in former President Doug Melvin’s 2015 trades, Stearns’s round of moves, and the first Ray Montgomery […] 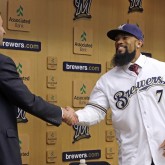 It was difficult to discern a roster building plan during the Brewers’ two week stretch of Rule 5 roster protection and waiver-and-designate, but that sense has disappeared completely this week. First, GM David Stearns effectively closed his waiver spree by signing Korean Baseball Organization superstar Eric Thames, adding a well-priced value play to the MLB […]