Following the original April 25 Minor League Context post, and yesterday’s note on the batting environments for Brewers affiliates, it is time to look into the environments faced by system arms. I looked at pitchers with 13.0+ innings pitched thus far, which produced a smaller batch of pitchers than bats. Yet, many of the environmental […]

On Tuesday morning, the Brewers’ affiliated minor league rosters were announced, showcasing the roster decisions made by GM David Stearns and the player development staff in perhaps their most important rebuilding season. 2017 is the year that talent acquired in former President Doug Melvin’s 2015 trades, Stearns’s round of moves, and the first Ray Montgomery […] 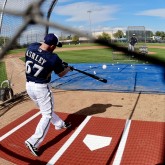 Pitchers and catchers have officially reported to Maryvale! This mostly means nothing. Actual Spring Training games are still a couple weeks away, and all today is really going to bring us is some grainy beat writer photos of Jimmy Nelson running around in the Maryvale outfield — which, if we’re being honest, we desperately need. […]