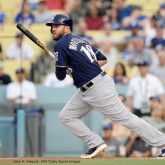 Minor League baseball is underway, and the Brewers brought a strong system into 2018 in spite of recent trades and graduations. Expect plenty more graduations this year, and maybe some trades, too. What stands out about this Milwaukee system is its depth. There are plenty of talented players waiting to rise up and claim their […]

2017 was an important developmental year for Milwaukee’s farm system, especially after what most considered a “down year” in terms of performances across the board in 2016. The Brewers saw the advancement and major league debuts of several notable prospects, including Josh Hader, Lewis Brinson, Brett Phillips, and Brandon Woodruff. These players already figure to […]