Last week, BP Milwaukee looked at some of the bigger storylines from the 2015 Brewers campaign. Julien Assouline covered, in my opinion, the most notable development of all: the incredible success of the bullpen. Even with Francisco Rodriguez now having departed, the team still has a ton of interesting relief pitchers for 2016. Beyond the obvious candidates — Michael Blazek, Will Smith, and Jeremy Jeffress all proved their mettle last season — borderline players such as Tyler Thornburg, Corey Knebel, and David Goforth will likely earn higher-leverage chances of their own.

Goforth, to me, stands out because he seems to have flown completely under everyone’s radar. Sure, a 4.01 ERA and 5.76 DRA won’t turn many heads — and rightly so — but a 101 cFIP suggests he has potential to be a league-average reliever. And looking at his repertoire only fosters that optimism, because, man, does this kid have stuff:

A total of 197 relievers threw at least 100 sliders in 2015; in that group, Goforth’s average velocity placed fourth. With a 71.4 percent strike rate and 19.3 percent whiff rate, it certainly met expectations. His four-seamer and sinker had a lot of bite as well — the former came in at 107th out of 287 qualifiers in velocity, while the latter finished 26th among 161 of its peers. Goforth’s four-seamers resulted in strikes 62.2 percent of the time and swinging strikes 13.4 percent of the time, while his sinkers did the same in a respective 60.9 and 6.5 percent of their appearances. Neither could touch the slider, but both seemed to hold their own.

So with that kind of heat, why does Goforth have an unclear future? First and foremost, the fastball didn’t really do that well, because the 27-year-old couldn’t command it very well: 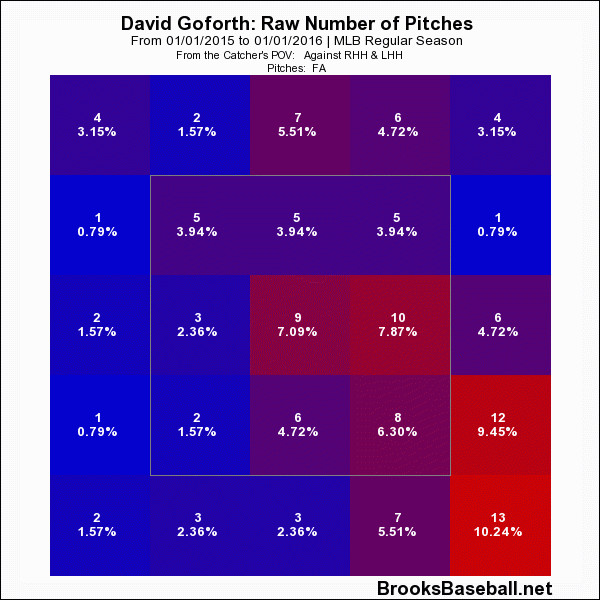 Unlike his sinker and slider, which he consistently placed down in the zone, Goforth was remarkably irregular with his four-seamer. Batters crushed it when they made contact — to the tune of a .308 ISO, .625 BABIP, and .419 TAv — which negated the sizable sum of whiffs. That sort of performance from his primary pitch didn’t help Goforth’s case during the season, nor does it make his future any brighter now.

Plus, Goforth appeared to suffer from the same ailment as Wily Peralta — a dearth of distinct movement: 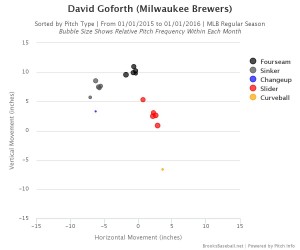 The slider may have flown past people, but it didn’t dart away from their bats. That may have had something to do with the shortcomings of Goforth’s hard offerings, which began to blend together with their breaking-ball counterpart. “Flat” fastballs, i.e. ones that don’t move very much, will often lead to hard contact, no matter their velocity. For now, this fate looks to have befallen Goforth.

There’s also the matter of platoon splits; as a pitcher who relies so heavily on sinkers and sliders, Goforth will likely falter against batters from the other side. We certainly saw this in some respects last season:

Only the gap in home runs made him an even pitcher (and not a very good one at that). If the long balls even out, the absence of strikeouts and presence of walks could expose Goforth against southpaws.

And, of course, we should also acknowledge the yawning gap between what Goforth achieved in The Show and his work on the farm. Over his minor-league career, Goforth has struck out 17.0 percent of opponents and walked 9.3 percent. The fact that those improved to 21.3 percent and 7.2 percent, respectively, at the Major League level doesn’t smell right. Goforth threw strikes and deceived hitters as a Brewer, but his resume makes it unlikely that he’ll sustain that.

Still, there’s enough here to warrant a few more chances. (After all, not many people can touch 90 with a secondary pitch.) Rebuilding offers players such as Goforth a golden opportunity to prove themselves — and to fight through adversity if they struggle. Maybe, without constant shifting between the minors and the majors, he’ll refine his fastball command, put some more movement on his pitches, and tinker with his approach versus lefties. In a Brewers bullpen that doesn’t lack options, Goforth will receive some time to possibly shine.

Its confusing to me because when they were developing him as a starter in the minors for a while, he also featured a curve ball and a change, both of which he seemed to abandon as a reliever. Relievers often abandon ancillary pitches to focus on two or three better pitches, but in this case it frustrates me. I remember in his first or second outing in the majors, he dropped in a nice get-me-over curve early in a count, you can see that singular curve registered in your Brooksbaseball graph. Its clocked in at just under 80mph. Even if it is not a strike out pitch, it certainly looked good as a change of pace/speed against lefties and even righties. I remember seeing him throw it and thinking “nice, this guy is going to mix in some pitches to gain strikes and change speeds.” He didn’t throw another one for the rest of the season. For a guy who’s main fastball and breaking ball (a slider which is more of a slider/cutter hybrid) only differs in speed about 5 mph, you would think they would instruct him to mix in a slower breaking ball or change up occasionally. Sounds like bad thinking on his part and very poor coaching by the Brewers. Another reason I’m glad Kranitz is gone.